In our series, Guide to the classics, experts explain key works of literature.

When asked to explain the significance and pleasure of the Chinese novel Dream of the Red Chamber, by Cao Xueqin, I’m afraid I usually flounder. How to put it to friends, students or colleagues that the tiffs, the leisurely intrigues and frustrated aspirations of a fractious bunch of adolescents constitute one of the great efforts at plumbing human experience?

Yet Dream of the Red Chamber, written in the mid-18th century, is the fullest immersion one could hope for into late imperial China, the best access to the minds, hearts and habits of that period, complete in everything from cosmology to cosmetics.

Read more: Far from white-washing, ABC's Monkey Magic remake takes us back to its cross-cultural roots

The episodic plot, sprawling over 2,500 pages in the standard Penguin translation, follows the infatuations and travails of a pubescent boy, Jia Baoyu. Baoyu is the unstudious and distracted son of a great, albeit troubled, house in Beijing. He is surrounded by a bevy of erudite and beautiful girls (relatives and maidservants), doted upon by his elderly grandmother, and terrified by his strict, pedantic father — a paragon or parody of the Confucian gentleman. In the pavilions, halls and gardens of this grand estate, allegory of and escape from the world, Baoyu struggles reluctantly towards adulthood. 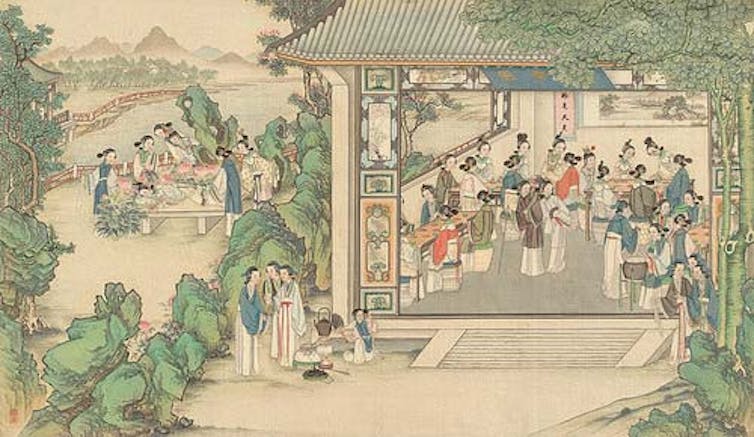 A painting from a series of brush paintings by Qing Dynasty artist Sun Wen, depicting scenes from the novel Dream of the Red Chamber. Wikimedia

The interlocking pieces of the plot are revealing vignettes and character studies, many of which have reached iconic status in Chinese culture, and proved fertile ground for theatre and the visual arts.

They function also as a mirror of a reader’s personality, status, age and values. Do you tend towards the maiden who moderates with steady counsel or to the volatile but brilliant orphan girl? Do you deplore or delight in the fiery, funny administrating aunt’s shady outlay of expenses and sometimes malicious (or even murderous) feistiness? As with Proust, the perspective changes with age: re-reading the novel this year, I noticed how my sympathies were shifting upward a generation.

What’s it all about?

The deceptively immaterial occupations of the characters’ daily rounds of visits and chats provide material as much for metaphysics as for psychology. Drama can be constructed one moment around whether Baoyu will have his tea (his nanny sometimes appropriates it), and the next moment around the boundaries of reality, or the purpose of human striving.

Somehow, almost deviously, through the spats, crushes and rivalries of a handful of teenagers, the great questions of the human condition are broached: what is a good life, faced with the inevitability and omnipresence of death? What are one’s obligations? How real is this life and what is it for?

Take the famous little scene in Chapter 22 when Baoyu is inspired to throw fallen flower petals into the stream, but is chided by his sensitive cousin, Daiyu, who remarks:

It isn’t a good idea to tip them into the water … The water you see here is clean, but farther on beyond the weir, where it flows on beyond people’s houses, there are all sorts of muck and impurity, and in the end they get spoiled just the same. In that corner over there I’ve got a grave for the flowers, and what I am doing now is sweeping them up and putting them in this silk bag to bury them there, so that they can gradually turn back into earth.

Contained in this image is, depending on how you see it, a poignant image of grief, an allegory of love or its inadequacy, or a Buddhist exhortation to accept impermanence. The work’s ability to imbue petty incident and trifling games with philosophical resonance is peerless. 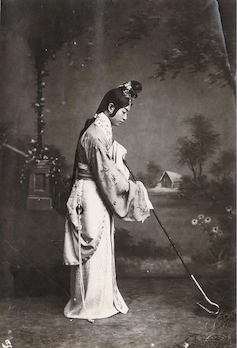 The actor Mei Lanfang in a 1924 adaptation of Dream of the Red Chamber. 梅兰芳先生《黛玉葬花》剧照集锦

But while you are distracted by the intricate web of their relations, and, we hope, by Baoyu’s marriage and/or enlightenment, the reader realises that this is a family, an estate, a dynasty, a universe, in decay.

Cao Xueqin, the author, was himself the scion of a family in slow collapse, and the work (left unfinished and completed after his death) is often read as an elegy to his own vanished childhood. From our historical vantage point, it is hard not also to recall that within 50 years of the novel’s publication, China was in the throes of the Opium War, its sense of self-sufficiency and centrality forever fractured (until, perhaps, now).

Scholars of the novel, whose field of study has expanded so far that it is known as “Redology”, have used the text to look into everything from the era’s medical practices, the prevalent tastes in theatre, its queer desire, ethnic power relations and reading habits.

An antidote to facile stereotyping

Dream of the Red Chamber has Balzac’s panoramic view of society, the satire of arrogance and fashion of Vanity Fair, the funny, meandering mischief of Decameron. But these comparisons are inadequate to a work so monumental and so vehemently itself, the epitome of the great tradition of Chinese family fiction.

The novel has spawned innumerable adaptations for the stage and screen, as well as dozens of sequels attempting to rescue or resolve its characters’ dilemmas and narrative arcs. It has influenced everything from the witty, cruel short stories of Eileen Chang, to the claustrophobic film, Raise the Red Lantern, and the opulent concubine-poisoners’ dramas of popular TV serials such as Empresses in the Palace.

The 1987 Chinese TV adaptation of the novel.

Above all, reading (or prescribing) the novel feels like the antidote to facile stereotyping of Chinese culture. All the core topics are present: family dynamics; Confucianism, Buddhism and Taoism; face and status; strategy and emotion. But all of these are played out for a readership which still regarded the world outside China as a curiosity, and was under no pressure to defend or justify its culture. It is a work of the Qing Dynasty, by a Qing author, for Qing readers; and it is the modern reader’s good fortune just to be allowed in.

Whether you read it straight through or dip in from time to time, this work affords entry to one of the great fictional universes.