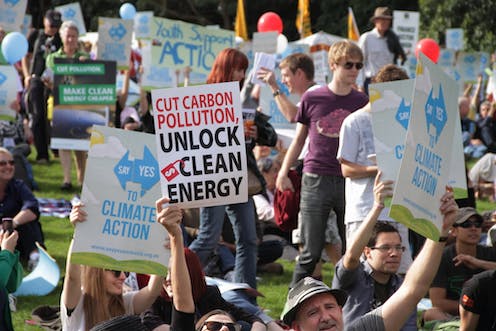 The Joint Standing Committee on Electoral Matters has released its report into the Electoral Legislation Amendment (Electoral Funding and Disclosure Reform) Bill 2017.

The bill seeks to ban foreign donations to political parties and their “associated entities”. But it also seeks to capture organisations, including charities, that undertake public advocacy on policy issues.

While much of the media attention has focused on the foreign donation ban, the bill also introduces a new compliance framework for such actors. This applies irrespective of whether they receive foreign donations or not.

The inquiry received over 200 submissions from a diverse range of charities, not-for-profit organisations, think tanks and legal experts. Most expressed major concerns about the complex and burdensome nature of the proposed compliance framework, and the “chilling effect” it could have on advocacy by charities in particular.

The committee made 15 recommendations in its report, released on Monday. It provided in-principle support for the bill’s passage, subject to the recommendations being adopted.

Read more: Ban on foreign political donations is both too broad and too narrow, and won't fix our system

The recommendations are a step in the right direction, responding to many of the concerns raised in the inquiry. But they are light on detail, and much will depend on how the government responds to them.

Contrary to what the chair of the committee, Senator Linda Reynolds, has stated, a number of the recommended changes are complex. This is particularly the case with redefining “political expenditure”, a key term that underpins almost the entire bill.

What is ‘political expenditure’?

If a charity or other organisation incurs “political expenditure” above $13,500, then it becomes subject to the bill’s compliance framework. Additional requirements are imposed for those incurring more than $100,000, but the committee recommended this level be reviewed.

The definition of this term is unclear. It’s also potentially very broad. It includes any expenditure on the public expression of views on an issue that is “likely to be before electors in an election”, regardless of whether an election has been called. This could include activities such as publishing reports advocating for changes to government policies, media engagement, advertising and potentially even paying staff to do this work.

A big problem is that the bill provides no guidance on the specific types of activities that are captured, nor how a charity is meant to look into the future and predict whether an issue is “likely to be before electors in an election”.

This makes it almost impossible for a charity to know with any certainty whether it’s complying with the definition.

The Australian Electoral Commission provided a supplementary submission to the inquiry, setting out the seven steps it uses to interpret the definition.

But it’s complicated and unworkable, and involves looking at different party platforms to assess how topical an issue may be. A leading constitutional law expert, Professor Anne Twomey, has extensively critiqued it.

It’s therefore not surprising that the committee recommended the definition be amended to make it more precise. The aim would be to ensure it applies only to:

expenditure undertaken to influence voters to take specific action as voters, so as not to capture non-political issue advocacy.

However, this will be no simple task, as the line between the two is not clear.

For example, if a charity produces a document outlining the positions of different political parties on the issue of homelessness, how would that be defined? Arguably, it is just providing information to voters, rather than influencing them to “take specific action as voters”.

Although the committee made a laudable attempt to address the various flaws in the bill, there is no quick fix.

Given the key term underpinning the bill is flawed and cannot be easily redrafted, the best outcome would be for it to be withdrawn.

This would allow for more public consultation and the preparation of a comprehensive regulatory impact statement. This would quantify compliance costs and consider alternative policy options.

If the government won’t withdraw the bill, it at least needs to act on each of the committee’s recommendations. In doing so, it should undertake public consultation on the detail of any amendments and seek a genuine outcome that ensures advocacy by charities and other organisations isn’t stifled.

More broadly, it’s arguable that the entire premise for increased regulation of non-political party actors such as charities and other organisations is flawed.

Few would argue against the need for some basic disclosure requirements regarding their direct electioneering activities, to provide transparency about the origin of the funds used for these activities. But these requirements already exist.

It’s not clear why a new compliance framework is needed to further burden these organisations, made up of people coming together to participate in our democratic processes. This is something explored in a US context in the book Unfree Speech. It argues against increased regulation because it restricts the free exchange of views, which is meant to be a cornerstone of democracy.

The argument for increased regulation of charities, including banning them from receiving donations from international philanthropy for use towards “political expenditure”, is particularly weak. By their very nature, charities exist for the public benefit. They are not permitted to have politically partisan purposes under the Charities Act 2013.

There is no evidence that international philanthropy is using Australian charities to subvert our democracy. On the contrary, the support it provides helps charities advocate on important issues such as the role of Australian aid.

Regulation can have benefits, but it can also have costs. If this bill becomes law, the cost could be a less vibrant democracy, with fewer voices willing to debate the policies that will shape our nation’s future.