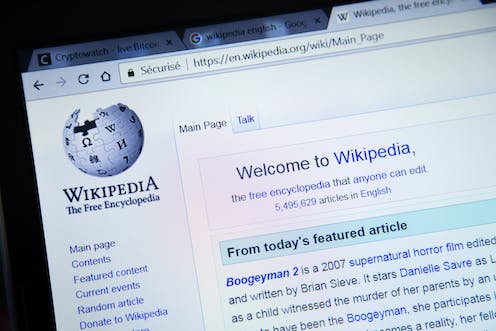 Almost a decade after the introduction of Bitcoin, there is a lot of hype about the blockchain technology on which cryptocurrencies such as Bitcoin are based. Some claim the technology will revolutionise commerce; others are more critical in their predictions.

But the technology behind blockchain remains a mystery to many people.

Read more: Why accountants of the future will need to speak blockchain and cryptocurrency if they want your money

A blockchain is a decentralised, distributed and open public ledger made up of a sequence of “blocks” that are “chained” via a cryptographic hash.

If that still sounds like gibberish to you, there is a popular application that shares the philosophy of the blockchain technology that can help you understand how it works: Wikipedia.

Wikipedia is a free online encyclopedia that depends on the collaborative effort of decentralised volunteer writers called “Wikipedians” who add to this constantly increasing repository of information.

While traditional encyclopedias rely on scholars to provide information, Wikipedia gives this role to the public, bypassing trusted authorities.

Similarly, Bitcoin gives the role of the intermediary to the public, bypassing traditional central intermediaries such as banks.

Wikipedians contribute information with the aim of improving the quality of the existing information. If an edit on Wikipedia is not accepted by other contributors it will be changed until a consensus is reached.

If no consensus can be reached, the “edit war” is settled by an appointed authority.

The consensus in Bitcoin follows the greatest amount of work expended by the Bitcoin network consisting of “miners”, and is represented by the longest blockchain.

Miners verify transactions and expend resources to complete the “proof-of-work”. Once the work is complete the network will show their acceptance by linking new blocks to the existing one.

Contributions made by Wikipedians are transparent, similar to the open and publicly accessible transaction history of any user’s Bitcoin wallet stored on the blockchain.

The time-stamped history of all edits made to the Wikipedia page is visible through the “View History”. Just as each Bitcoin can be traced to its inception, all prior versions and iterations of a Wikipedia entry are publicly available and show the path towards the current consensus.

The dynamic evolution of content within Wikipedia is a major difference from traditional encyclopedias, which offer a more centralised and more static repository of information.

Read more: Why it would be in everybody's interests to regulate cryptocurrencies

Both Wikipedians and bitcoin miners replace the necessity for trusted central authorities.

Interestingly, the incentive to contribute to the network differs. Wikipedians are not financially rewarded, whereas Bitcoin miners receive Bitcoin for their contributions to the blockchain.

If a miner included an invalid transaction in their block, then the cost to complete the proof-of-work would go unrewarded as honest miners would not link new blocks to the chain.

Although the opportunity to vandalise and provide inaccurate information on Wikipedia exists, the transparency of edits makes it straightforward for honest writers to identify and rectify changes.

This discourages devious attempts to discredit the information on Wikipedia since any attempt will be recorded as a time-stamped, unalterable chain of edits. A long chain of edits represents the amount of work Wikipedians have put into developing the topic. Longer chains can signal a higher quality of information.

A feature that Wikipedia does not share with the classical blockchain is encryption. Because ownership and anonymity is an important feature on the Bitcoin blockchain, encryption of information is needed so that coins cannot be stolen or duplicated.

On Wikipedia there is no ownership of information, making encryption redundant.

Another key difference is synchronised, simultaneous distribution. Wikipedia is not distributed because the participants of the network do not update and store the information on their computers. If they did, it would be very costly and thus very inefficient – a major drawback of distributed systems.

Decentralisation is also inefficient as it generally takes longer to reach a consensus. But the final outcome may be better compared to a centralised system.

In other words, Wikipedia may be less efficient than a traditional encyclopedia but the final edition may be much better.