The Australian Bureau of Meteorology’s latest climate outlook, issued today, suggests the above-average warmth of April is likely to extend into May, and for parts of the south, potentially into winter.

The outlooks for May temperatures show that both days and nights are likely to be warmer than average for much of Australia. Only northeast Queensland is likely to miss out on warmer temperatures, with no strong push there towards warmer or cooler conditions.

The unseasonable warmth, which has broken records in Adelaide and Sydney, appears to be driven by high ocean temperatures, and weaker westerly winds and much lower than average soil moisture across southern Australia. 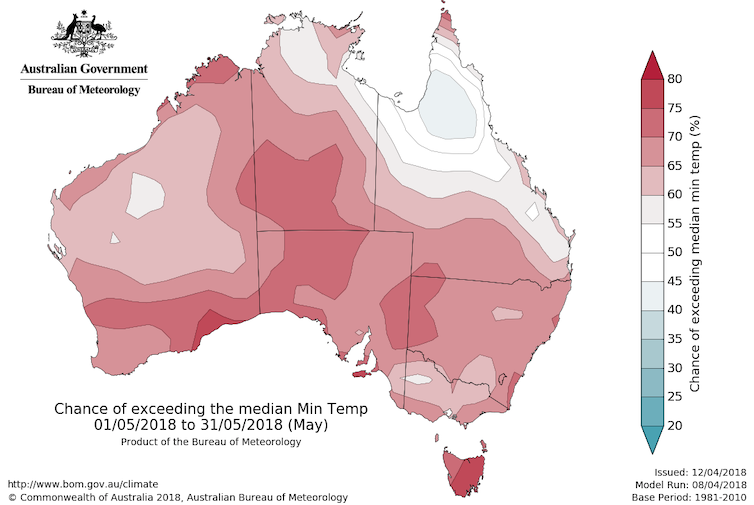 Bureau of Meteorology The rainfall outlook for May is mixed, but generally shows no strong shift towards a wetter or drier month for most of Australia. Read more: Winter heatwaves are nice ... as extreme weather events go By June the tendency for warmer than normal days may start to wane. This easing of the outlook for above average temperatures as we head into winter is reflected in the full May-July outlook, with only some parts of southern Australia likely to be warmer than average. Southern parts of Western Australia and South Australia have a moderate chance of warmer than average daytime temperatures, with stronger odds over southern Victoria. 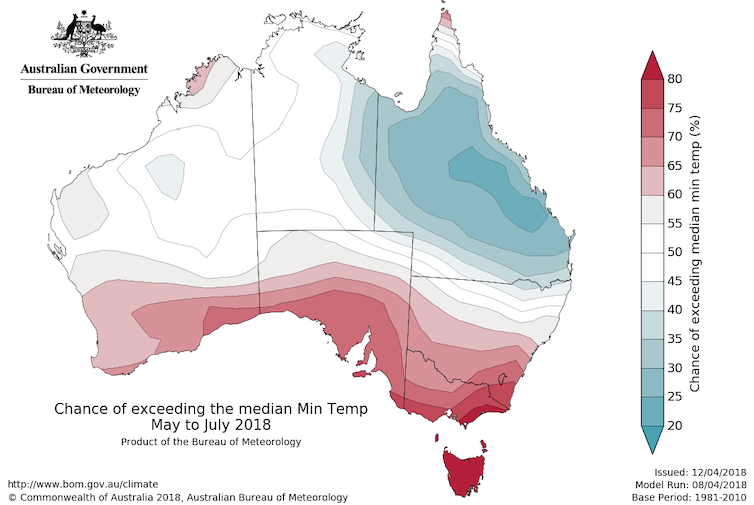 The full May to July outlook shows a more balanced picture, with southern Australia more likely to experience higher than average temperatures. Bureau of Meteorology Odds don’t favour a strong push towards a particularly wet or dry three months for much of Australia, apart from some areas in the far southeast. What’s behind the warmth? The El Niño–Southern Oscillation (ENSO) and the Indian Ocean Dipole (IOD) are two of Australia’s major climate drivers. ENSO is currently in a neutral phase, meaning its neither El Niño nor La Niña. Our outlooks suggest it is likely to stay neutral leading into winter. Read more: Explainer: El Niño and La Niña The IOD is also neutral, and most models suggest it will remain so over the coming months. But given it is harder to forecast ENSO and the IOD in autumn compared to other times of the year, climatologists will be monitoring Indian and Pacific Ocean temperature patterns closely as we edge towards winter. With near-average temperature patterns in the tropical oceans to our east and west, there is no strong shift in the outlook towards widespread wetter or drier conditions for Australia. 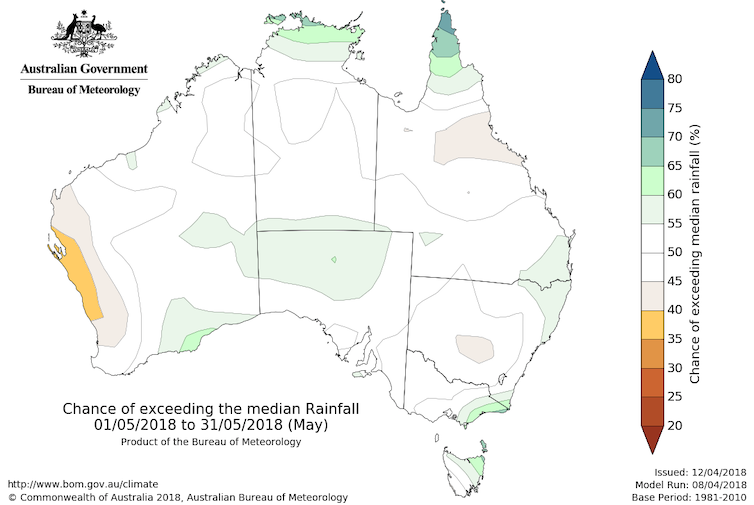 Rainfall during May is expected to remain essentially average. Bureau of Meteorology However, for temperatures it’s a little different. Sure ENSO and the IOD are playing a minor role right now, but other factors are coming into play. Read more: The BOM outlook for the weather over the next three months is 'neutral' – here's what that really means Ocean heat waves Ocean temperatures in the Tasman Sea and around New Zealand are much warmer than average – in fact at record levels in the past few months - and are expected to remain warm over the coming months. These warm sea temperatures are associated with a large area of lower than usual air pressure to Australia’s east, which is likely to weaken the westerly winds that normally bring cooler air to southern Australia in autumn and winter. Another factor in the current and forecast warmth is the very much below average soil moisture across southern Australia. With little moisture available to evaporate and cool the air, and the soils themselves not able to store as much heat, the air above the ground heats more rapidly in the daytime. 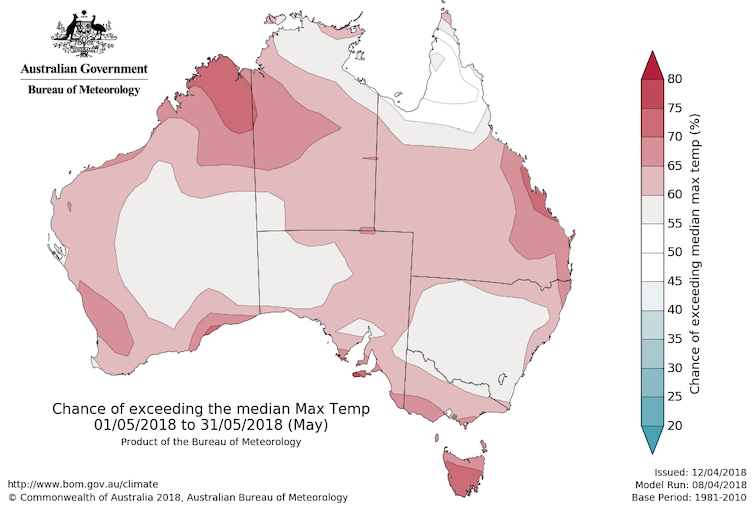 Bureau of Meteorology In addition to our natural climate drivers, Australian climate patterns are being influenced by the long-term trend in global air and ocean temperatures. Winter maximum temperatures have increased by 1℃ over the past century, with three of the top five warmest winters in the past 108 years occurring since 2009. Oceans around Australia have warmed by slightly more, with four of our top five warmest years since 2010. So while the normal big two drivers of our climate remain benign, it would actually be wrong to assume there will be a quick return to more average temperatures. The outlook released today suggests we may have to wait at least another month until service returns to normal for much of the country.