Every year Australia’s councils contest the academy awards of the water industry: the Best Tasting Tap Water in Australia. Entrants compete on clarity and colour as well as taste and odour.

This week the NSW/ACT representative will be selected to go on to compete against other state winners in October for the coveted Australian crown. (As in Eurovision, the previous winner hosts the final, so it will be held in Toowoomba, which swept the competition last year with its Mt Kynock Water Treatment Plant vintage.)

It’s a not-so-serious business (apart from bragging rights and a nice trophy, the Australian winner will go to an international competition in the US next year) but it raises an interesting question. All tap water has its own tang, imparted by the source, the plumbing and any treatments. How do you think the water coming out of your tap will go?

The odour of tap water is strongly linked to its taste. No surprises there – the combination of taste and odour is well established.

One of the most common complaints about tap water taste and odour involves chlorine, which is an essential disinfectant used around the world. Chlorine might have an offensive smell, but it is a major weapon against pathogens spreading in our water supplies. Areas with very old and corroded pipes might add more chlorine to counter the risk of microbial contamination entering the system.

Chlorine is highly volatile and you might particularly notice this smell when you run a hot shower. If you want to enjoy drinking water without the chlorine taste or smell, boil it slowly for several minutes. That will remove much of the chlorine. (And then put it in a container in the refrigerator to get much more appealing ice-cold water.)

The competition, run by the Water Industry Operators Association of Australia, uses “blind” testing, so the judges do not know the source. All samples need to be at room temperature. The testers use a testing wheel to rate attributes including sweet, sour, salty and bitter. 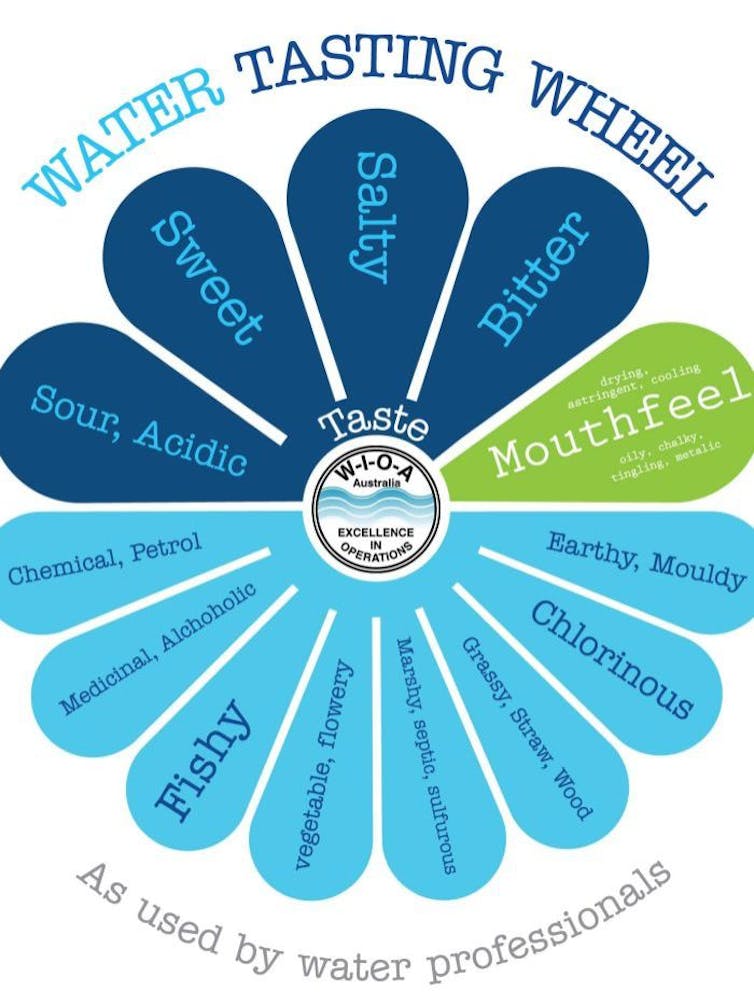 Water Industry Operators Association The water will also be judged on clarity, colour, odour and “mouthfeel”. Perhaps the most obvious mouthfeel character of water is effervescence or “sparkling bubbles”, something that consumers will pay plenty for in bottles sourced from exotic-sounding locations. Hard vs soft These qualities often reflect water’s origins, which affects aspects like its mineral content. Groundwater generally has a higher mineral content, particularly from areas of limestone rich in calcium and magnesium carbonates. This is called “hard” water. Read more: Your future food will be grown with waste water Water with high levels of hardness may be frustrating when you wash your hands as it can stop a soapy lather forming. Very hard water might also have a salty taste. Hard water can create other issues, such as imparting an unusual flavour in tea and causing a build-up of scale minerals in hot water appliances and water pipes. The opposite of hard water is “soft” water. This is often from water supplies fed by stored rainfall, which generally contains very dilute sodium chloride (also known as table salt; it’s largely responsible for making seawater salty). If you live close to the coast and have a tank collecting runoff from your roof you will probably have more salt in your water. You might not actually taste the salt, but you may notice a metallic tang from corrosion of the roof, tank and plumbing triggered by the salt. Water supplied by rainwater tanks can provide odd tastes and odours. This can be the first sign of a major problem, and you should always investigate the source. Dead animals in the tanks and accumulated vegetation from overhanging trees can be unwelcome tank water quality hazards. It is worth remembering that homes using rainwater tanks often do not treat or disinfect the water before consumption. Read more: Four myths about water fluoridation and why they're wrong A sulphur taste and odour can also occur in some water supplies. This is often termed “rotten-egg gas”, and is caused by hydrogen sulphide. Similar to chlorine, its odour might be detected when running a hot shower. The source of sulphur can be from the water supply geology or from the decay of organic matter. More and more of Australia’s water supply is highly treated by the local or regional water industry. We have increasing populations and a possibly drying climate. Some areas have a relatively natural supply of high-quality raw water from very clean catchments and storages. Melbourne, Brisbane and Sydney and many locations across Tasmania are fortunate to have very clean and mostly natural water supplies. Other places, like Alice Springs or Perth, rely heavily on treated groundwater. Desalination has also emerged as a major new water supply source over the last 20 years. It is often used only when lack of rainfall depletes natural water storage, but it is a permanent factor in Perth’s water supply. It will be a major victory for the Australian water industry if the winning water sample comes from a recycled water supply, particularly if the source includes some component of recycled sewage! Read more: More of us are drinking recycled sewage water than most people realise