Imagine this. You are an elite racing driver competing at a prestigious event on the streets of New York. You’re in a good position, preparing to accelerate up to 220km/h, when one of your main rivals sails past, thanks to a boost of energy fans voted to give them.

This is “Fanboost” in action, an initiative of the FIA Formula E series that has the potential to radically change the way fans engage with the sports they love.

Read more: How electric car racing could one day challenge the spectacle of Formula One

Formula E is the electric vehicle counterpart to more established categories, such as Formula One, and V8 Supercars in Australia. It was established primarily to drive advances in electric car technology, and has attracted a range of top manufacturers like Jaguar, Mercedes, BMW and Porsche.

Racing on street circuits from Paris to Beijing, the series has developed a dedicated fan base, but one that is minuscule compared to the more established racing leagues. 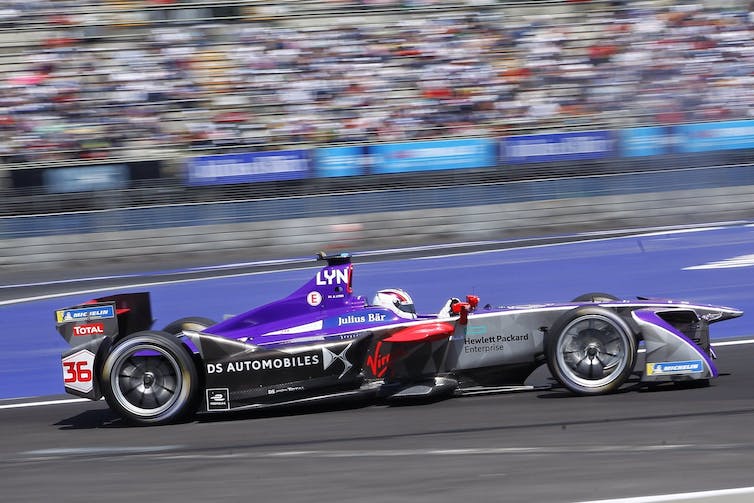 Sashenka Gutierrez/EPA Too slow and too quiet The problem is that compared to many conventional forms of racing, Formula E is a little too slow and a little too quiet. Formula E cars reach a top speed of around 224km/h (compared to the 350km/h Formula One can achieve) and produce an electronic whine rather than the throaty roar of petrol driven race cars. But this sport is as much about spectacle as it is about skill, so the series has struggled to lure fans away from other forms of racing. Fanboost is one of the ways the sport’s administrators are trying to overcome this issue. Fans can vote for their favourite driver via either the official Formula E website, the mobile app or via social media. The three drivers who get the most votes are rewarded with a short but significant power boost they can use during the race. To maintain parity between teams, the motors of Formula E cars have an electronically limited power output, which is temporarily raised for the drivers awarded with Fanboost. This gives these drivers the ability to make a crucial passing manoeuvre or block an attempted pass, and could change the outcome of the race. It is a strategy ideally suited to attracting the young and social media obsessed fan base the sport needs. Fanboost is not without its detractors. Some fans see it as a gimmick that detracts from the skills of the drivers, and some drivers believe that the system can be too easily manipulated to produce false results. How media changes the game Motor racing has always had a close relationship with the media. It’s costly to run a professional race team, so securing and promoting sponsors is vital. Top teams have gone to remarkable lengths to ensure their sponsors get good media exposure. Sponsor decals now adorn every visible inch of the car – including the footwells and dashboards in some categories. Even the start time for events such as the Australian Formula One Grand Prix have been changed to better align with European television schedules. These concessions illustrate what is frequently referred to as mediatisation: the notion that the media has become so central to modern society that other social activities and institutions are forced to conform to its logic. Read more: Electric vehicles are changing the world. And they're only just getting started While some academics feel that mediatisation overemphasises the power of the media, the basic premise is difficult to refute. From politics to dating to ordering food, the media has become an essential part of how we engage with the world. As Andreas Hepp – a German professor and one of the world’s leading mediatisation researchers – has said, the media acts as a “moulding force”, potentially altering what and how we communicate. In Formula E, this moulding force has profoundly changed the way the drivers and teams communicate with fans. Racing drivers are notoriously media-shy. Formula One star Kimi Räikkönen suggested during a television interview that the most boring part of a race weekend was “now”. The potential to get a real on-track advantage by directly engaging fans means that Formula E drivers have adopted a very different approach, posting live updates and providing insights into their personal lives to boost their social media profiles. Other sports are taking note Perhaps not surprisingly, other racing categories have begun to realise the potential of social media to broaden their fanbase and deepen their connection with existing fans. Under the new management of Liberty Media, Formula One is slowly loosening its rules on social media use by drivers and teams, and in Australia the V8 Supercars series has substantially expanded their social media presence. Read more: Sport and social media's rocky relationship is safe ... for now Sports like tennis, cricket and football are also exploring ways of using emerging media technologies to engage fans more, though none have been as bold as Formula E in letting fans actually affect the outcome of events. It is, however, likely that the administrators of these sports are following the Fanboost experiment closely, and looking for ways to implement similar strategies in their sports.