In 1497 the Dominican friar Girolamo Savonarola perpetrated the most infamous act of cultural desecration in European history, burning artworks and books, items of clothing, perfumes and cosmetics, mirrors and musical instruments which he thought typified artistic and moral degeneracy. On February 7 in Florence’s Piazza della Signoria, Savonarola consigned to the flames works by such artists as Boccaccio, Fra Bartolomeo and Lorenzo di Credi.

In a city that the Medici family had transformed into an international hub for the arts, the bonfire was catastrophic. However, a year later, in 1498, Savonarola would meet the same fate in the same square, witnessed, most likely, by the same crowd. His execution is documented in a painting by the relatively unknown artist Francesco di Lorenzo Rosselli, currently on display in The Corsini Collection: Masterpieces from Florence at the Art Gallery of Western Australia.

Savonarola’s bonfire wasn’t the only example of cultural purging at this time, but it has become a symbol for the worst excesses of fundamentalist chauvinism. The fire, couched as a religious festival and act of cleansing, took place during the Mardi Gras festivities. Usually a day of celebration and enjoyment before the privations of Lent, Fat Tuesday (Mardi Gras) was a time to indulge and enjoy, but not in 1497.

The fire has a particular resonance for those of us living in the aftermath of another book burning in the streets of Germany in 1933, when Nazi sympathisers burnt the works of targeted authors. A century earlier Heinrich Heine had declared in his play Almansor: “Where they burn books, they will in the end also burn people.” And so it came to pass in Germany, as it had for Savonarola. 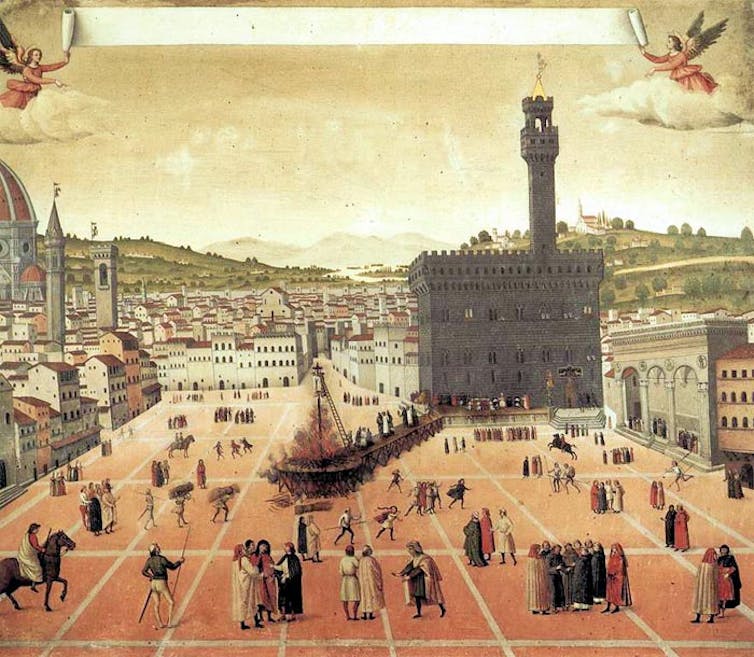 Action at a distance

Just one year after the bonfire, Savoranola lost favour with the pope and the people of Florence for his excessive zealotry. The pope threatened to excommunicate him for refusing to take direction. The citizens found his influence impacted on their day-to-day lives, devoid of festivals and entertainment.

Rosselli’s painting focuses on the moment when the flames swell up to engulf Savonarola and two compatriots hanging from a scaffold in the centre of the main piazza of the city. But it’s hard to get too emotional about the scene because everything occurs at a distance.

We can just see the flames rising to the feet of the dangling priests and the line of men bringing in bundles of wood to stoke the fire. In a quirky time-lapse of multiple figures, Savonarola and his compatriots are shown being tried, then found guilty, before being escorted to the gallows by their hooded executioners and kneeling penitently before the gallows, awaiting their fiery fate.

One soldier recoils from the heat of the flames and a small group of clergy, stage right, eagerly discuss the ramifications of the event as it unfurls before them. A couple of elegantly dressed men look over their shoulders at the public execution while in the background groups of women are transfixed. Some others pay it nodding attention, but most in the square that day are more concerned with passing time with their friends and doing business.

While it documents Savonarola’s demise, this is really a portrait of Florence and what it represents for its relieved citizens: order and authority. Within the strict geometry of its square, rendered in single-point perspective – made possible by the invention of the Florentine architect Brunelleschi only 80 years before – we see the central character in this picture, the Palazzo del Bargello. Darkly ominous, it was a prison under the Medicis – the site of public executions like this one, and home to the offices of the chief of police, called the Bargello, hence the building’s name.

As in two other great images of civic order – Ambrogio Lorenzetti’s The Allegory of Good Government, painted in 1339 for Siena’s Palazzo Pubblico, and Piero della Francesca’s Ideal City, painted just before these events in 1470 – the citizens of Florence go about their daily lives in peace and safety within the ordered space and elegant proportions of their city.

All of this is made possible by the imposing power of the dark palace of the Bargello. The cruel disruptions of the temporary lapse of harmony brought on by Savonarola’s four-year “popular republic” have now passed and the city has been restored to peace and order.

Rosselli’s famous image was copied many times. In one copy, included in the Corsini Collection, the large banner held aloft by angels, perched on conveniently passing clouds, is absent. Perhaps, because it was blank in the original it was easily dismissed, or possibly it was left out because nothing further needed to be said once the city had returned to orderliness. 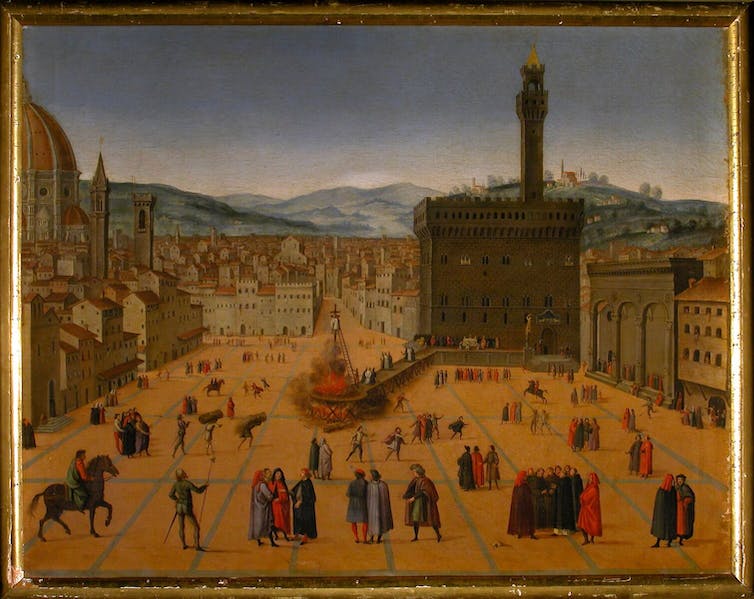 Much like the crowds in the streets taking this event in their stride, Rosselli and his emulators situate us as disengaged observers, carefully scanning the rhythmic geometry of the architecture and the bustle of community life that is the city’s raison d’etre.

Savonarola is now just a haunting memory, a reminder of what happens when fundamentalist ideology sets out to eradicate anything it finds disagreeable. What survives is Brunelleschi’s beautiful dome of Santa Maria del Fiore, the sublime arches of the Loggia dei Lanzi, the ebullient life of the city and of course many masterpieces of visual art.

A Window on Italy – The Corsini Collection: Masterpieces from Florence is on display at the Art Gallery of Western Australia, February 24–June 18 2018.