Queensland’s Labor government this month tabled a bill to tighten the regulation of land clearing. Queensland is by far the worst offender in this area, following a litany of reversals of vegetation protection.

After a period of tightened laws between 2004 and 2013, the Newman government set about unwinding key reforms during its 2012-15 term.

Following these changes, land-clearing rates quadrupled to almost 400,000 hectares per year, to the dismay of conservationists, with rising concern about the impacts on wild animal welfare and wider ecological impacts.

The state’s Labor government, which retained power at the November 2017 election, made an election promise to tighten vegetation management laws. However, the bill is likely to be fiercely debated after the parliamentary committee tables its report next month.

Although the bill promises a steep reduction in land clearing, albeit without any firm target, there is likely to be a significant gap between what the government has promised and what its legislation may deliver in reality.

To explain why, let’s look in more detail at what the proposed legislation does, as well as what it doesn’t do.

The 2013 amendments legalised the clearing of mature forest for large-scale crop-growing developments. The bill will once again ban it, fulfilling Labor’s election promise, but it remains a major point of friction with agriculturalists.

This will not stop the roughly 114,000 hectares that have already been approved from being cleared. It would, however, stop any more approvals.

About 10% of clearing of mature forest is due to high value agriculture approvals.

Up to 67% of clearing of regulated vegetation is occurring under self-assessment provisions. No permit is required for this, provided that landowners follow the code and give notice of their plans.

Of this self-assessed clearing, about 60% is for “thinning”. The government has now recognised that “thinning is not a low-risk activity” and is removing the main provision that allows it, but is keeping some self-assessed thinning provisions, such as for advanced regrowth.

Other types of self-assessed clearing would continue, particularly the clearing of mulga forests for livestock fodder, albeit under a tighter code. This was a major concession to agricultural interests.

As the bill has not banned self-assessment outright, future land-clearing rates will ultimately depend on how stringent the new codes turn out to be in practice.

“Area Management Plans” are an older, parallel mechanism for allowing self-assessed clearing. Clearing under these plans accounts for up to 38% of clearing of regulated vegetation. The new legislation would phase out existing plans, but would retain a provision to make new area plans, including for thinning. 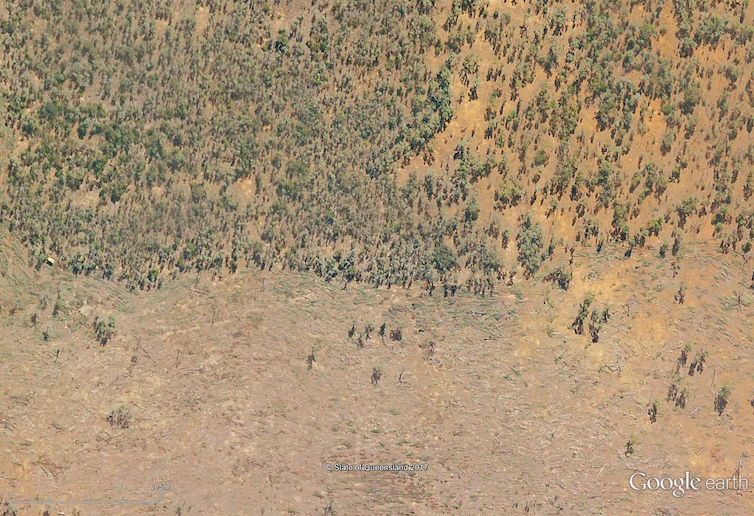 Google satellite image of remnant forest that was legally thinned under a self-assessable code in 2015. The top half shows intact forest, and the lower half thinned forest. WWF-Australia

The government promised to protect “high conservation value regrowth”. This includes threatened ecosystems and species habitats that are needed for recovery. The new law would expand these definitions to regulate clearing of regrowing forests older than 15 years, and of regrowth alongside streams in all Great Barrier Reef catchments, not just the northern ones as at present.

This will bring more than a million hectares that are currently exempt under regulatory control, a major step forward. However, the bill excludes regrowth that has been “locked in” as exempt on property maps. Clearing of regulated regrowth may also still proceed under a new self-assessable code, which apparently lacks protections for endangered species habitats or ecosystems.

Exemptions pose a major stumbling block to the government’s promise to “protect remnant and high conservation value regrowth”. An area currently exempt on a regulatory map can be reclassified, and the government plans to do this for more than 1 million hectares of high conservation value regrowth. However, areas that have been “certified exempt” on a property map cannot be reversed – this represents 23 million hectares (13% of the state’s area). The government has reaffirmed its commitment not to reverse these exempt areas.

What’s more, the bill allows ongoing locking in of exemptions. This is a significant issue because more than 60% of all tree clearing is exempt. Most of this is in already locked-in areas, and a large fraction includes advanced regrowth of high conservation importance.

It remains to be seen how much the A$500 million Land Restoration Fund will protect these locked-in areas.

In light of these loopholes and exemptions, the new law looks set to fall short of what the Queensland government has promised. This is primarily due to ongoing reliance on self-assessed clearing and exempt areas. However, the proposed legislation and funding together should go some way towards turning around Queensland’s soaring land-clearing rates.

Tree clearing will continue to be a hotly contested policy space, and not just in Queensland. New South Wales recently trod the same path, placing a heavily reliance on self-assessed codes. These were recently challenged successfully in court. A similar challenge is under way in the Northern Territory, citing the greenhouse emissions caused by a large-scale clearing approval.

The federal opposition has also pledged to tighten land-clearing controls in national legislation. The tide may well be turning, albeit only slowly so far.

The authors acknowledge the contribution of Dr Martin Taylor, Protected Areas and Conservation Science Manager at WWF-Australia and Adjunct Senior Lecturer at The University of Queensland.

Authors: Anita J Cosgrove, Senior Research Assistant in the Centre for Biodiversity and Conservation Science, The University of Queensland