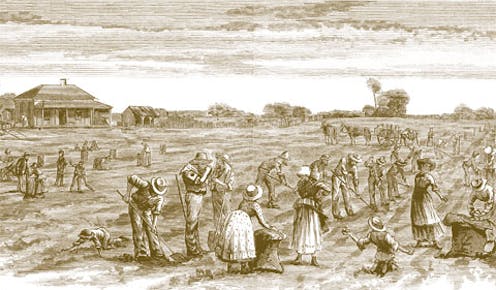 Australian English decidedly finds its origins in British English. But when it comes to chasing down Irish influence, there are – to paraphrase Donald Rumsfield – some knowun knowuns, some unknowun knowuns, and a bucket load of furphies.

The first Irish settlers, around half of whom were reputedly Irish language speakers, were viewed with suspicion and derision. This is reflected in the early Australian English words used to describe those who came from Patland (a blend of Paddy and Land).

The Irish were guided by paddy’s lantern (the moon); their homes adorned with Irish curtains (cobwebs); and their hotheadedness saw them have a paddy or paddy out. These Irish were said to follow Rafferty’s Rules – an eponym from the surname Rafferty – which meant “no rules at all”.

More than a few Irish were larrikins. In his book Austral English, E.E. Morris reports that in 1869, an Irish sergeant Dalton charged a young prisoner with “a-larrr-akin about the streets” (an Irish pronunciation of larking, or “getting up to mischief”). When asked to repeat by the magistrate, Dalton said: “a larrikin, your Worchup”.

This Irish origin of larrikin had legs for many years, and perhaps still does. Unfortunately, here we have our first furphy, with more compelling evidence linking larrikin to a British dialect word meaning “mischievous or frolicsome youth”.

But if larrikin language is anything to go by, these youths went way beyond mischievous frolicking – jump someone’s liver out, put the boot in, stonker, rip into, go the knuckle on and weigh into are just some items from the larrikin’s lexicon of fighting words.

Read more: Future tense: how the language you speak influences your willingness to take climate action

With the Dalton furphy, though, we see evidence of something called “epenthesis”, the insertion of extra sounds. Just as Dalton adds a vowel after his trilled “r” in a-larrr-akin, many Aussies add a vowel to words like “known” and “film” (knowun and filum) – and here we see a potential influence of the Irish accent on Australian English.

In contrast to larrikin, the word sheila is incontrovertibly Irish. Popular belief derives it from the proper name, Sheila, used as the female counterpart to Paddy, a general reference to Irish males.

Author Dymphna Lonergan, in her book Sounds Irish, prefers to derive it from Irish Gaelic síle, meaning “homosexual”, noting Sheila wasn’t a particularly popular Irish name as it began to appear down under.

Significantly though, St Patrick had a wife (or mother) named Sheila, and the day after St Paddy’s Day was once celebrated as Sheelah’s Day. So, Sheila was something of a celebrity.

Barrack is another likely Irish-inspired expression. A range of competing origins have been posited for this one, including the Aboriginal Wathawarung word borak, meaning “no, not”, and links to the Victorian military barracks in Melbourne.

But the most likely origin is the Northern Irish English barrack, “to brag, be boastful of one’s fighting powers”. The word has since sprouted opposite uses – Australian barrackers shout noisy support for somebody, while British barrackers shout in criticism or protest.

Perhaps surprisingly to many, the Irish were the first Europeans some Australian Aboriginal tribes encountered.

This contact is evident in the presence of Irish words in some Aboriginal languages. For instance, in the Ngiyampaa language of New South Wales, the word for shoe is pampuu, likely linked to a kind of shoe associated with the Aran Islands in Ireland, pampúta.

Lonergan argues that more attention should be directed to this sort of Irish Gaelic influence.

Lonergan points, for example, to archival evidence linking the origin of didgeridoo to an outsider’s perception of how the instrument sounds, questioning the degree to which the sound corresponds to the word.

As a counter-argument, she notes an Irish word dúdaire meaning “trumpeter or horn-blower”, as well as Irish and Scots-Gaelic dubh, “black” and dúth, “native”. She observes that Irish and Scots-Gaelic speakers first encountering the instrument might well have called it dúdaire dubh or dúdaire dúth (pronounced respectively “doodereh doo” or “doojerreh doo”).

Similar arguments are made for a number of other words traditionally viewed as having British English origins.

The Australian National Dictionary sees chook (also spelled chuck) as linked to a Northern English/Scottish variation of “chick”. However, Lonergan notes this is phonetically the same word (spelled tioc) the Irish would have used when calling chickens to feed (tioc, tioc, tioc). It is the imperative form of the Irish verb “come”.

Another potential influence also comes from the transference of Irish meaning to English words. For example, the Australian National Dictionary is unclear as to the exact origin of shout, “to buy a round of drinks”, but Lonergan links it to Irish working in the goldfields and an Irish phrase glaoch ar dheoch, “to call or shout for a drink”.

Lonergan posits that Irish miners translating to English might have selected “shout” rather than “call” – “shouting” could easily have spread to English speakers as a useful way to get a drink in a noisy Goldfields bar.

Good dollops of Irish in the melting pot

Irish influence on Australian English is much like the influence of the Irish on Australians themselves – less than you’d expect on the surface, but everywhere once you start looking.

And those with a soft spot for Irish English might feel better knowing that some of their bête noires are in fact Irish (haitch, youse, but, filum and knowun).

As Irish settlers entered the Australian melting pot, so too did a hearty dose of their language.