Forget a peaceful night’s sleep. The whine of a lone mosquito circling your bedroom can be incredibly frustrating. They’re not just the deadliest animals on the planet, they could be the most annoying!

Often various products or apps claim special sounds can stop mosquitos from buzzing. But the science doesn’t back up these claims. And tuning into mosquitoes’ murmurings might even help us prevent disease.

Why do mosquitoes make that sound?

All mosquitoes make sound. The mosquitoes you hear are usually the ones a little less decisive about biting. Those more ready to bite will come in, land, suck your blood and fly off before you’ve noticed them.

Read more: What can I eat to stop mosquitoes biting me?

Male and female mosquitoes of some species have been documented responding to the wing beat frequencies of each other in a “mating duet”. In a phenomenon known as “harmonic convergence” the mosquitoes change the frequency of their wing beats in response to each other. This helps identify potential mates and make an assessment of the quality of the potential mate based on the quality of their “song”.

This romantic sing-along has been reported in a range of mosquitoes involved in the transmission of dengue and malaria pathogens. So an understanding of how mosquitoes make and respond to sound could provide better mosquito surveillance or control strategies. 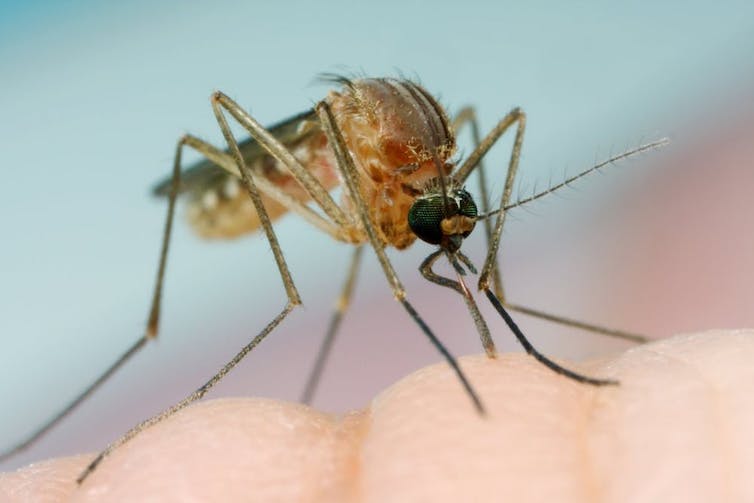 Sounds to keep mosquitoes away

There is a long history of entrepreneurs marketing various sound-producing gadgets to repel mosquitoes. The sounds broadcast typically covered a range of frequencies, some even the sounds of mosquito predators (such as the wing beat frequencies of dragonflies). There was little scientific evidence they worked.

There are now dozens of “mosquito repellent” apps available online for your smartphone. The sounds may now be available with a swipe of the finger, rather than a flick of a switch, but the general sale pitch remains the same, silence the mosquito bites with sound.

It’s all wishful thinking. There is no evidence sound emitting devices can stop mosquitoes biting. A review of field testing showed no protection was provided. Similarly, laboratory studies failed to show any bite prevention.

Studies have even demonstrated these sound-emitting devices actually increase mosquito bites by the Asian Tiger Mosquito and Yellow Fever mosquito.

There’s no reason to think smartphone apps are going to perform any better than any of the other gimmicks that have come and gone from supermarket shelves over the decades. If they cannot stop mosquito bites, they won’t prevent mosquito-borne disease. 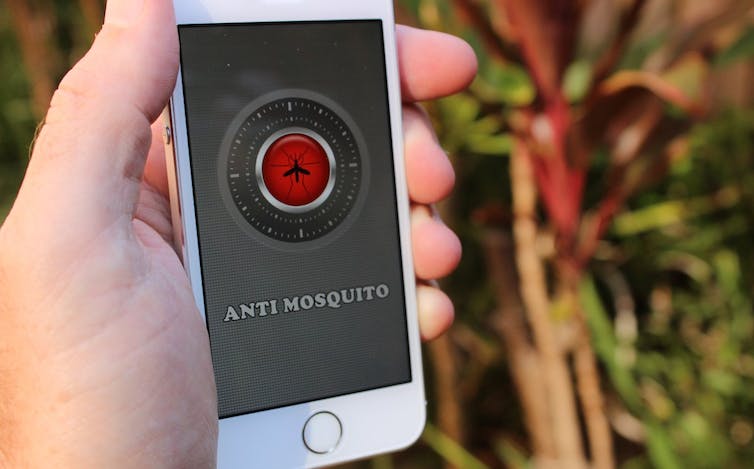 There are dozens of apps available for your smartphone but there is little evidence they provide any genuine protection from biting mosquitoes. Cameron Webb (NSW Health Pathology)

Sound may not be helping stop mosquito bites but it could still be useful in managing mosquito-borne disease outbreaks.

Mosquito traps used by scientists and health authorities around the world focus on attracting female mosquitoes as they search for blood or a place to lay eggs. There’s generally not been much interest in males.

Female mosquitoes didn’t respond to sound but when biosecurity surveillance relies on picking up as many mosquitoes as possible, the additional male mosquitoes collected increases the likelihood of detecting the arrival of exotic mosquitoes.

Read more: New mosquito threats shift risks from our swamps to our suburbs

The “acoustic fingerprint” of mosquitoes may be also be key to new mosquito traps that not only catch the mosquitoes, but can identify them too. Studies have investigated how wing beat frequencies can be used to identify the mosquito species and even tell if they’re male or female.

There is little doubt traps of this nature will play a critical role in providing an early warning of future mosquito-borne disease outbreaks.

For now though, if it’s the buzz of bedroom mosquitoes keeping you awake, there are some easy solutions. Screening your windows will keep them out. Using insecticides will help but are not always necessary.

Switch on a ceiling or oscillating fan and the breeze will blow away the carbon dioxide you’re exhaling that’s attracting the mosquitoes. It will also make it just a little harder for the mosquito to circle your bed and buzz in your ears!