Around 140 Australian nursing-home residents took their own lives between 2000 and 2013, our new study shows. Published in the International Journal of Geriatric Psychiatry, the study is the first to examine the number and patterns of suicide in Australia’s nursing homes, and the largest such investigation in the world.

We found nearly 70% of those who took their own life were male, 66% had a diagnosis of depression and nearly 80% were experiencing one or more major life stresses, such as health deterioration. Around 43% were experiencing isolation and loneliness, and nearly 30% had trouble adjusting to life in a nursing home.

We examined the electronic and hard-copy records of each state and territory’s coroner and the investigations into these deaths. Details extracted included: the personal characteristics and health status of the individual; how, when and where the incident occurred; and organisational factors such as the size, location and ownership of the facility.

Our findings highlight that older men with depression entering aged care are at heightened risk of suicide and our aged-care system isn’t equipped to provide the support to protect them.

There are more than 170,000 older adults living in 2,700 nursing homes across Australia. This equates to around 6% of people aged 65 and older, and represents one of society’s most vulnerable populations who depend on others for care.

Suicide is one of the leading causes of death in many countries for people aged between 15 and 29, so many assume it’s mainly a problem in younger people. But adults over 65 years (particularly males) have one of the highest suicide rates of all age groups in many countries around the world.

Read more: Elderly men have the highest suicide rate – and ageism stops us from doing something about it

The small proportion of adults over 65 living with depression in the community shows that depression is not a normal part of the ageing process. Depression can be more difficult to diagnose in older adults, as they may themselves believe their symptoms to be a natural reaction to a physical illness or the life changes they are going through.

But the much larger figure of those suffering depression in nursing homes raises some serious questions. This includes whether these people were depressed before they were admitted to care, or became so afterwards. 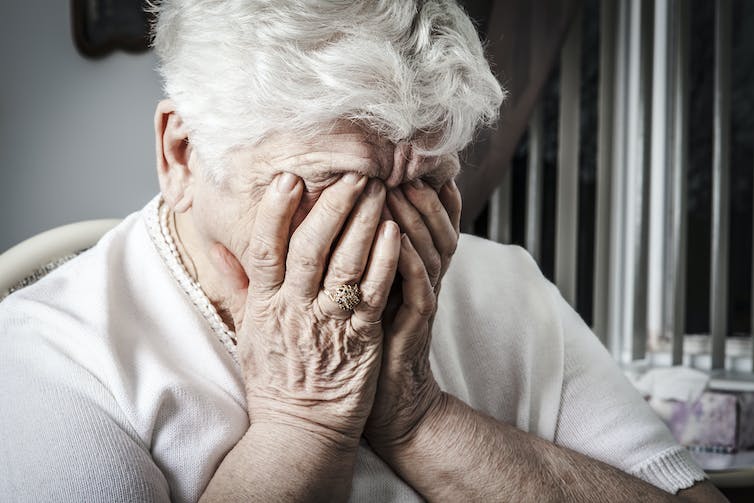 Not everyone who is depressed takes their own life. from shutterstock.com

And while there are strong links between depression and suicidal behaviour, not everybody who is depressed takes their own life. Similarly, not every person admitted to aged care has a negative experience or response. So what needs to be done to ensure this tragedy doesn’t occur?

What we need to do

Most nursing home providers strive to provide safety and quality of care and lifestyle for their residents. But it’s clear the current approach to providing aged care isn’t enough when it comes to preventing suicides.

Change is required at a national policy level to lift the overall quality of aged care, with a specific focus on improving access to mental health services. Increased recognition of the risk of suicide among older adults is also required so targeted suicide prevention strategies can be included in the national suicide prevention framework.

The owners and providers of aged-care services must examine their own admission assessments for screening of depression and thoughts of suicide among residents, as well as follow-up procedures for residents who are showing signs of depression or not coping well with changes to their living situation.

Family and friends should look to maintain their loved ones’ social connections and feelings of being valued and to advocate for professional assessment and treatment if a resident is sad, lonely, isolated and withdrawing. This is not a sign of ageing.

Our research group has published recommendations to prevent injury-related deaths in residential aged care, which includes a section on preventing suicide. This followed our national study demonstrating the extent of premature and preventable deaths in Australian nursing homes.

Read more: Many older people in care die prematurely, and not from natural causes

With the ageing population, this issue should be an important social concern and a priority for prevention efforts.