Sicilian priest and long-time exorcist Father Benigno Palilla recently told Vatican Radio that requests for exorcisms had tripled in the past few years. There were now, he said, 500,000 alleged cases of demonic possession recorded in Italy each year.

With a population of around 60 million, this means the Devil is apparently active in one of every 120 Italians. That’s a lot of demoniacs and a lot of demons – at least some 500,000 of them if they’re not multi-tasking.

As a result of this demonic epidemic, a six-day school will be held in Rome in April at a Catholic education institute, the Pontifical Athenaeum Regina Apostolorum, to train clergy in how to recognise and deal with the demonically possessed.

Why the sudden increase in possession by the Devil? Palilla attributes it to an increase in practices that “open the door to the Devil” – such as people seeking out wizards and fortune tellers, reading tarot cards, and generally dabbling in magic and the occult.

All this seems rather odd coming out of a Vatican under the reign of the apparently “modern” Pope Francis. Yet, while the pope is socially progressive, he is theologically quite conservative. The Devil is a real person, “armed with dark powers”, he declared in a television interview in December 2017. 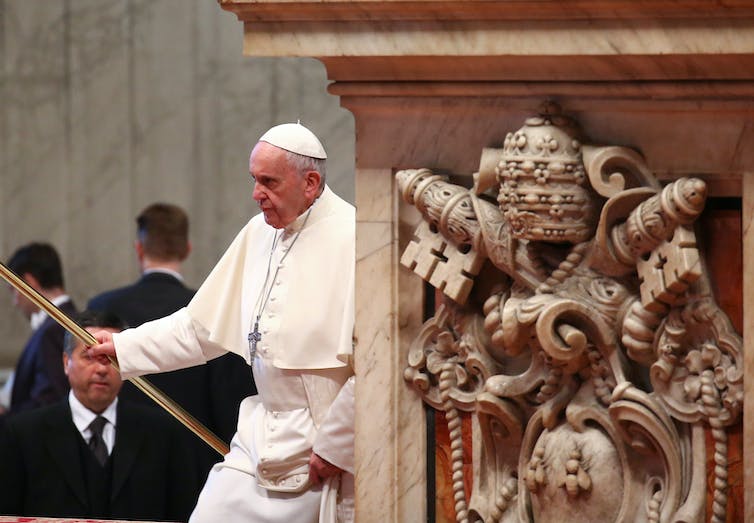 Pope Francis at the Vatican last month: he has said the Devil is a real person. Alessandro Bianchi/Reuters

The Devil is nothing if not ecumenical. It is not merely Catholics who apparently become possessed. Conservative evangelical Protestantism, particularly in its Pentecostal forms, has also seen the need for “deliverance ministries” for those who have become infested with demons whether from dabbling with the Devil in occult and magical practices or simply as a result of the Devil’s increased activity as the end of the world approaches. As the late Billy Graham declared in July 2016: “Satan is not only real, but he is far greater than we are, so great that we should have every reason to fear him.”

Read more: What is Pope Francis on about with all this talk of Satan and evil?

In viewing a vast array of modern occult practices as demonic, Palilla is drawing on a Christian tradition of viewing magic and the occult as satanic that goes back to Saint Augustine (354-430 CE) and beyond. For Augustine, even the simplest forms of divination – like reading the stars, examining the entrails of animals, or observing the flight of birds to foretell the future – were dealing in the satanic.

In the golden age of demonic possession from 1500 to 1700, demoniacs and exorcists multiplied. It was difficult to tell then, as now, whether the increase in exorcists was a consequence of the increase in the possessed, or vice versa. Possession was undoubtedly very contagious.

In Catholic Europe, convents of nuns were said to show the signs of possession. Their tongues hung from their mouths, swollen, black and hard; they threw themselves backwards until their hands touched their feet and walked around like that; they made use of expressions so indecent, it was said, as to shame the most debauched of men.

In Protestant England, children in godly households were prone to be “infected”. Certainly in both European Catholicism and English Puritanism, the power of the exorcist over the demons was an effective tool in demonstrating the truth of Catholicism or Protestantism respectively.

So, ironically, the Devil served the interests of both Catholic and Protestant churches. Modern Catholics and Protestants seem just as keen on demonstrating their respective religious truths not only against confessional opponents but against the “dark powers” of secularism too.

Why the recent rise?

We can date the rise of demonic possession in the modern West to the early 1970s, in particular, to an emblematic moment in the 1973 film The Exorcist. There the demon inside the 12-year-old Regan announces to the exorcist Father Damien Karras: “And I’m the Devil. Now kindly undo these straps.” When the priest asks, “Where’s Regan?”, the demon responds: “In here. With us.”

This was the beginning of a re-engagement with the demonic in film, television, literature and music – and in Christianity – that has lasted to the present. It influenced the moral panic about the imagined sexual abuse of children in satanic cults. It also contributed to the increased (although unwarranted) suspicions among conservative Christians of demonic influence in the developing New Age movements, particularly modern witchcraft (Wicca) and neo-paganism.

Read more: A murky cauldron – modern witchcraft and the spell on Trump

This re-emergence of the Devil in popular Western culture is part of a new engagement with an enchanted world. Popular culture has embraced a realm of preternatural beings both good and evil – vampires and fairies, witches and wizards, werewolves and wraiths, shape-shifters and superheroes, succubi and incubi, elves and aliens, hobbits and the denizens of Hogwarts, not to mention zombies.

So an enchanted world now exists alongside the disenchanted one. It is a place of multiple meanings where the supernatural occupies a space somewhere between reality and unreality. It is a domain where belief is a matter of choice and disbelief willingly and happily suspended. Horror and fascination happily mingle with each other.

In this newly enchanted world, the Devil has once again found a place. It is this new imaginary realm that has enabled the fear of the Devil yet again to capture the modern Western imagination.

This rediscovered realm of the supernatural has, as conservative Catholicism and Protestantism would have it, enabled the Devil, in the words of the New Testament, “to prowl about like a roaring lion seeking whom he may devour”.