The Arctic has been unusually warm since the beginning of 2018. In the past week air temperatures have hovered around 20℃ above normal or even higher. On February 25, the Cape Morris Jesup weather station in northern Greenland recorded 6.1℃, despite the fact that at this time of year, when the sun is still below the horizon, temperatures are typically around -30℃. 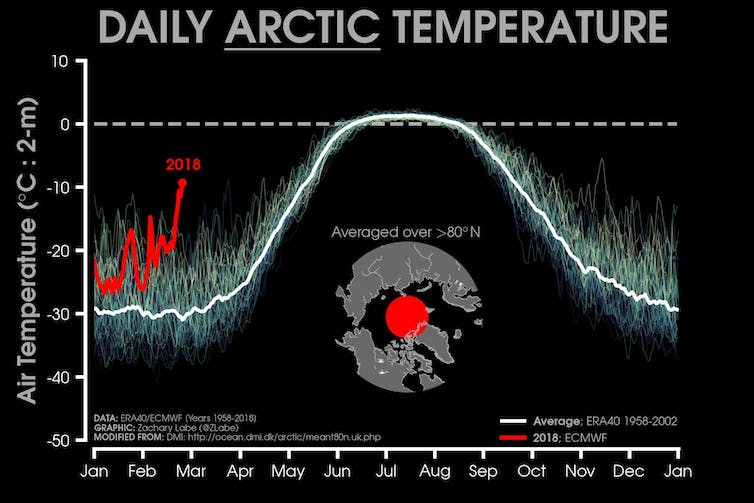 A surprising feature of this warming event was how far into (and beyond) the Arctic it has penetrated. Warm air migrated north from the Atlantic Ocean, over the North Pole and towards the Pacific Ocean, bringing above-freezing air temperatures to large areas of the Arctic Ocean for more than 24 hours.

We have not seen a warm intrusion from the Atlantic Ocean on this scale since at least 1980. 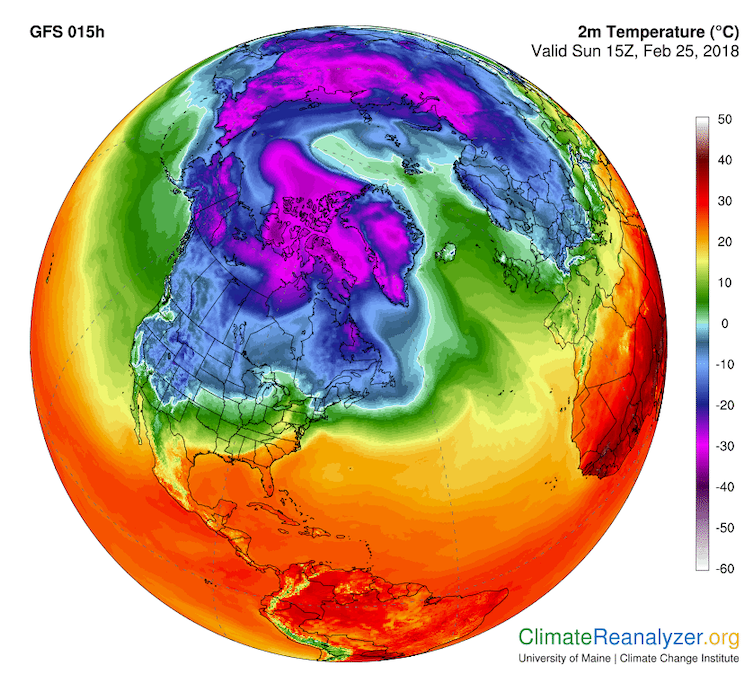 Air temperatures at 3pm on February 25, 2018, based on GFS forecast. The warm air incursion is clearly visible in green. ClimateReanalyzer.org/University of Maine

Warm events in the middle of the northern winter are not unheard of. Large winter storms can bring strong winds that pump warm air into the Arctic from lower latitudes.

For example, during the Norwegian explorer Fridtjof Nansen’s 1896 expedition aboard the icebreaker Fram, the crew observed temperatures of -3℃ on one midwinter’s day. More recently, in December 2015, an Arctic warming event brought temperatures of 2℃ to the North Pole, and the warm weather continued into early 2016.

Winter warming events at the North Pole. Number of days each winter when the air temperature exceeds a given threshold. Graham et al., 2017

But, crucially, this type of event is becoming more common and longer in duration, with higher peak temperatures. 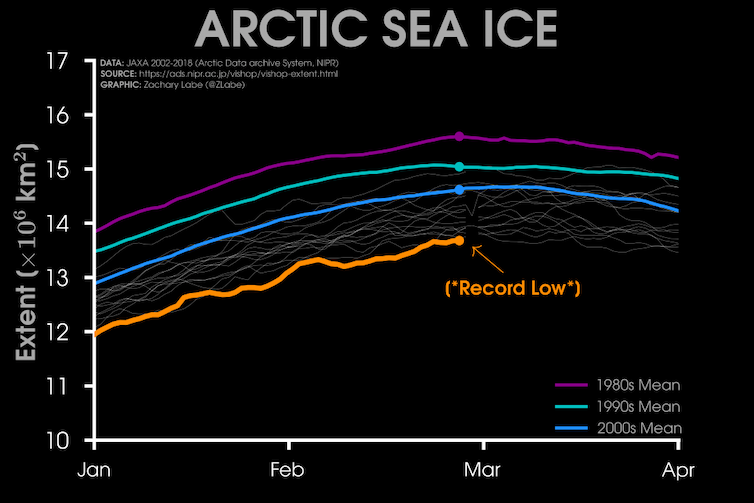 The current warm conditions in the Arctic have implications for sea ice year-round. Sea ice grows in winter and melts in summer. The warm air temperatures will slow down sea ice growth, and strong winds will push it around, breaking it up in places – as happened north of Greenland earlier this week.

Open water where the ice is broken will release extra heat into the atmosphere. By the time the spring sun comes around, the sea ice pack is thinned and weakened, and may melt more easily.

While the Arctic has been hot, Europe has been bitterly cold this week: London recorded -6℃; Berlin reached -14℃; and the Alps plunged to -27℃. Rome received 5-15cm of snow on Monday, and up to 40cm of snow fell in Britain on Wednesday.

It might sound counter-intuitive, but this cold weather is directly linked to the recent warming event in the Arctic. 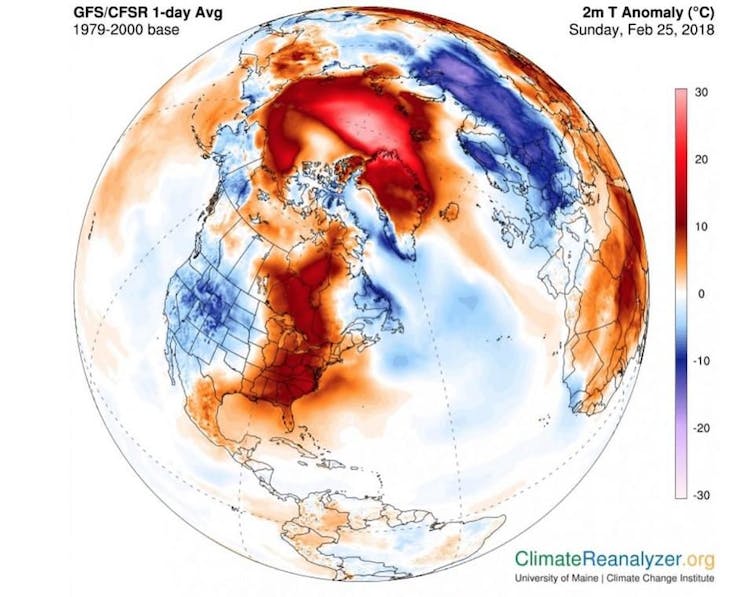 Normally, the cold air above the polar region is contained in the Arctic by a ring-like band of strong winds called the polar vortex. But in the middle of February this year, the polar vortex split into two vortices: one over Eurasia and the other over North America.

Between these two features, a strong high-pressure system gradually formed. As a result, warm air was pumped up into the Arctic on the west side of the high, while cold air was channelled southwards to the east of it. Hence the exceptionally warm air in the Arctic and the cold snap in Europe. 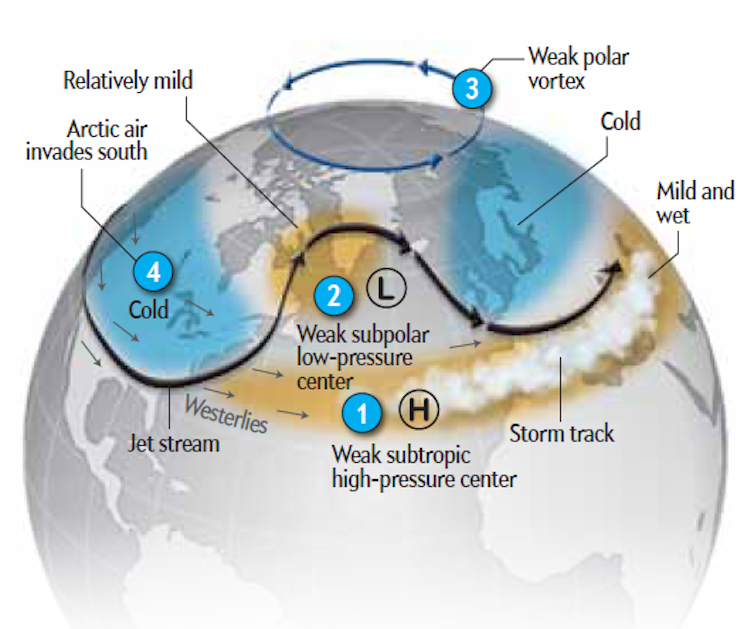 Is the polar vortex changing?

Research suggests that the polar vortex has become “wavier” as a result of this weakening. A wavier jet stream would lead to more frequent cold outbreaks of polar air at lower latitudes, and at the same time cause warm air to intrude into the Arctic. However, other researchers have argued that “large uncertainties regarding the magnitude of such an influence remain”.

Generally speaking, warming at every latitude makes cold spells at low latitudes less likely, and warm intrusions at high latitudes more likely, unless the Arctic warming leads to a fundamental change in the dynamics of the atmosphere.

Read more: Climate shenanigans at the ends of the Earth: why has sea ice gone haywire?

As scientists, we were startled by the extent of this week’s Arctic warming, and will be working hard to understand the short- and long-term implications. All eyes will be on the upcoming maximum winter Arctic sea ice extent, which is likely to happen in the next few weeks and could possibly set a new record low.