The government has convened 16 experts to help deliver its plan to save the Great Barrier Reef.Ove Hoegh-Guldberg, Global Change Institute, University of Queensland, Author provided

Federal environment minister Greg Hunt has announced the make-up of the Independent Expert Panel of 16 leading experts who will advise the government on actions and priorities relating to the Great Barrier Reef. As an Australian who is passionate about the future of our Reef, I am honoured to have been selected and stand ready to serve.

Over recent years there have been lots of panels, and even more reports, about the Reef and its health. So what will the new one bring to the table?

We will mainly be advising on how best to progress with the Reef 2050 Plan – the umbrella for protecting and managing the Great Barrier Reef from today until 2050. It is a key component of the federal and Queensland governments' response to the recommendations of the UNESCO World Heritage Committee.

Recent concerns over whether or not the Great Barrier Reef should be added to the official list of World Heritage In Danger rested partly on whether or not state and federal governments are taking appropriate steps to reverse the Reef’s clear decline over the past several decades.

The plan consists of hundreds of actions, as well as several clear targets, such as:

While the plan been criticised by the Australian Academy of Science as being too modest in scope, these targets nevertheless represent a considerable challenge, particularly given the short deadlines. And the targets and deadlines are consistent with the seriousness of the specific problems facing the Great Barrier Reef.

The new independent expert panel features a balance of expertise, including ecologists, water quality experts and climate change experts, as well as agricultural and conservation scientists. Australia’s Chief Scientist Ian Chubb will chair the panel, which besides supporting the implementation and review of the Reef 2050 Plan will also advise on the Reef Water Quality Protection Plan, help guide the Reef Trust, and perform other related actions aimed at reversing the downward trend of the Reef’s health.

This panel will also interact with the recently established Great Barrier Reef Water Science Task Force, chaired by Queensland’s Chief Scientist Geoff Garrett. Given the complex set of arrangements for protecting the Great Barrier Reef, Queensland will also be looking at the issue from its own perspective.

All eyes are now on Australia, with this being the first of many steps to be taken by the federal government to reverse the decline of one of the nation’s (and the world’s) greatest environmental assets. With a rapidly changing climate posing one of the severest threats the Great Barrier Reef, federal government leadership is also required at the United Nations Paris climate summit later this year.

Professor Hoegh-Guldberg undertakes research on coral reef ecosystems and their response to rapid environmental change, which is supported primarily by the Australian Research Council (Canberra), National Oceanic and Atmospheric Administration (Washington, D.C.), Catlin Group (London), and Great Barrier Reef Foundation (Brisbane). He is a member of the Federal Independent Expert Panel and Queensland State Great Barrier Reef Water Science Taskforce. He did not receive salary for writing this article. 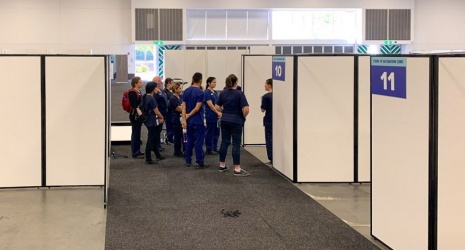