My colleagues and I have developed a 3D printable “clip-on” that can turn your smartphone into a fully functional microscope.

We’ve released the design online so that anyone can print it and modify it to suit their needs.

Read more: Blood tests and diagnosing illness: what can blood tell us about what's happening in our body?

For a lot of medical diagnostics, you need to look at small stuff – down to the level of individual cells. To do that, you need a microscope.

There’s been a push over the past decade or so by scientists and engineers to bring diagnostics into the home, and to other areas where you can’t really bring traditional lab equipment.

Scientists are hoping that this will allow them to, for example, detect malaria and other blood borne parasites in the field in Africa.

And the backbone of a lot of portable medical diagnostic devices is a mobile phone-based microscope.

A good place to start

You may not think of your mobile phone as being anything like a microscope, but it has almost all the parts you need. The lens and camera sensor are arranged exactly as they would be inside a microscope – all you need to do to get some magnification is stick another lens in front.

The next part is to think about how you are going to illuminate your sample, which is often just as important as the lenses you use.

There’s been a lot of great work over the past decade or so engineering mobile phone microscopes with amazing capabilities – for example, the Fletcher lab at UC Berkeley, and the Ozcan lab at UCLA – and a lot of it has to do with custom illumination.

The engineering involved to assemble these mobile phone microscopes is not trivial, however. You often need a decent amount of skill and a lab to be able to put these devices together. We wanted to see how simple we could make a microscope, meaning the fewest extra parts and assembly steps possible.

We figured that it made a lot of sense to use the internal flash in the camera to light up your sample. The challenge is that the flash points in the wrong direction – you need to turn it around to shine through the sample and into the camera.

Redirecting light like this usually requires something fancy like a mirror or a prism. But we realised that the flash on a phone is so bright we can just use the diffuse reflection (glare) off regular plastic. So we designed the clip to have a series of tunnels that confine light and turn it around to face the sample and camera. 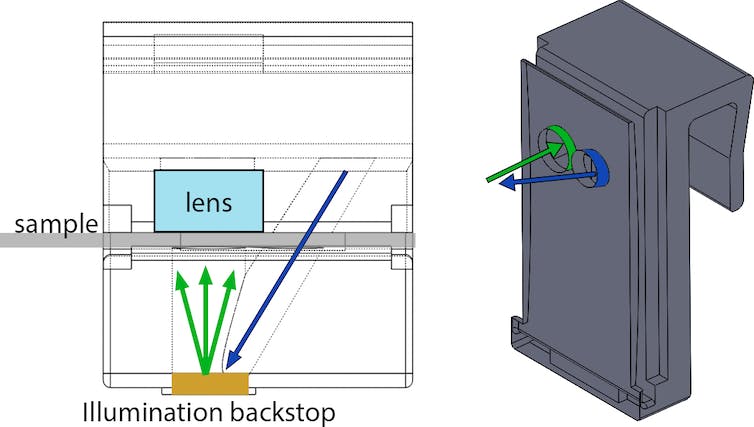 Left: Wireframe schematic of the clip on device. Flash illumination is indicated by the blue arrow. Upon striking the illumination backstop (made of the same 3D printed resin as the rest of the clip), this light is reflected diffusely towards the sample and then through the lens into the camera. Right: Cutaway 3D model of the clip-on device, showing the illumination tunnels. Scientific Reports, CC BY

A lot of light is absorbed by the 3D printed resin of the clip, which is black. But it’s not perfectly black, and even the tiny fraction of light that makes it through the tunnels and reflects off of the black surface is more than enough to light up a microscopic sample. And that’s it – no mirrors, prisms or illumination lenses are needed.

Next, of course, you need something to look at. The local pond is a good place to start. Put some water on a slide or in a capillary tube and you will find many cool-looking microorganisms going about their lives.

A microorganism viewed with the mobile phone microscope.

This type of illumination is called bright-field microscopy. But we actually went a bit further, and showed that you can turn the flash off and use the Sun to perform dark-field microscopy - where the specimen is lit up, but the field around it is dark.

The clip is designed in such a way that sunlight (or ambient room light) gets trapped in the glass sample slide, and can only be redirected into the mobile phone camera if it hits an object in the sample. If the sample slide is empty, the background is dark (hence dark-field). If there is an object it shines bright on the dark background, and as such this is a great way to detect really subtle objects such as cells (which are mostly water) sitting in water.

What we’re hoping is that our design, or something like it, gets used for ultra simple, cheap and robust mobile phone based devices – be it for medical diagnostics in underserved areas such as the remote Australian outback and central Africa, or monitoring microorganism populations in local water sources.

Read more: How we've evolved to fight the bugs that infect us

We’ve released the design online so that anyone can print it and modify it to suit their needs. This part is important because the mission of low-cost microscopy is to ease access to this high tech equipment. This is best accomplished when everyone has the opportunity to make one for themselves or to adapt it freely.

The clip can be printed using any 3D printer - we prefer the Formlabs family of printers - and you’ll need black resin. The cost in resin per clip is typically a couple of dollars at most. You’ll also need a lens to put in the clip. We buy ours from an online retailer and then remove the lens from the camera module.