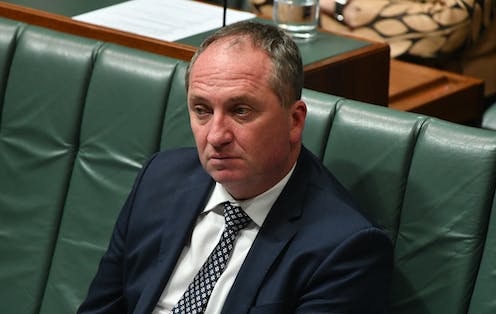 Prime Minister Malcolm Turnbull has claimed Joyce did not breach the Statement of Ministerial Standards regarding employment of spouses and family members as Campion was not his partner at the time of her appointment. Joyce has also denied he breached the ministerial rules.

Read more: Labor moves in on the Barnaby Joyce affair

What is the role of ministerial staffers?

Ministerial advisers are politically partisan staff who are personally appointed by ministers to work out of their private offices.

These advisers have become an integral part of the political landscape in the last 40 years. The number of Commonwealth ministerial staff increased from 155 in 1972 to 423 in 2015.

How do they fit in our system of government?

The modern Westminster ministerial advisory system is built on the 1853 Northcote-Trevelyan report in Britain.

In the 18th and early 19th century, it was difficult to be appointed to a UK government office unless you were an aristocrat with the right connections to a very small elite. The Northcote-Trevelyan report rejected appointment based on patronage. It argued this led to difficulties in getting a good supply of employees in the public service compared to other professions.

This report forms the basis of the Westminster public service today. Public servants are expected to be neutral and apolitical, and recruited and promoted on the basis of merit. The intention was very much to purge the system of patronage.

How are ministerial staff appointed?

Australian ministerial advisers are employed under the Members of Parliament (Staff) Act as ministers’ personal staff.

The employing minister determines the employment terms and conditions of ministerial advisers; the prime minister can vary these. The law is sparse and does not stipulate any precise requirements in terms of staff appointments.

In practice, the appointment of ministerial advisers is based on a party-political network of patronage. The primary consideration is loyalty to the political party – not merit.

There have been notorious instances of the appointment of unsuitable staff. These include then deputy prime minister Jim Cairns’ appointment of his mistress, Junie Morosi, as his principal private secretary (although she was considered spectacularly unqualified for her position).

Read more: Grattan on Friday: Is Barnaby's baby a matter of 'public interest' or just of interest to the public?

Some prime ministers have instituted a centralised process to reduce the appointment of unsuitable candidates. However, my research has shown that some senior ministers are able to circumvent such a process due to their position within the party.

Also, these processes primarily seek to filter candidates based on political danger – rather than on merit considerations.

Is there a breach of the rules in Joyce’s case?

Turnbull’s Statement of Ministerial Standards provides that ministers’ close relatives and partners are banned from being appointed to positions in their ministerial or electorate offices. They also must not be employed in the offices of other members of the executive government without the prime minister’s express approval.

Joyce and Campion claim their relationship started after her appointment – so the government has argued this clause does not apply.

However, the ministerial standards also specify that ministers must declare any private interests held by them or members of their immediate family. And under the Statement of Standards for Ministerial Staff, ministerial advisers have to disclose – and take reasonable steps to avoid – any real or apparent conflicts of interest connected with their employment. Staff are required to provide their employing minister and the special minister of state with a statement of private interests.

Therefore, the relationship between Joyce and Campion should have been disclosed when it arose, as there might have been an apparent conflict of interest connected with Joyce’s ministerial position. It is then up to the prime minister to decide what is to happen following this.

But both the standards for ministers and for their advisers are not legislated. They are not enforceable in the courts or in parliament. Enforcement is handled completely within the executive, which has an incentive to bury embarrassing material wherever possible.

This means any breaches of the standards by ministers and their advisers would be handled behind closed doors, without any formal scrutiny by parliament or any external bodies.

The enforcement of ministerial and adviser standards has been patchy. Whether a minister resigns depends on the prime minister of the day and if there is media furore and public outrage over an issue.

Are the rules too lax?

The legislation governing the employment of advisers is sparse and limited to affirming ministers’ powers to employ their advisers. Beyond this, there is no legislative requirement for ministerial advisers to adhere to certain behavioural rules.

The weak appointment rules have allowed Campion to be shuffled around different offices without a formal appointment process.

The UK has a cap of two advisers per minister. Australia has no such limits.

Australia has the weakest regulation of ministerial staff when compared to other similar Westminster democracies. Other countries have stricter regulations that both restrict the actions of advisers and increase transparency.

Australian ministerial staff are now very important players in our democracy, but ministers and advisers are weakly regulated within our system. The law has lagged behind, but now is the time for reform.