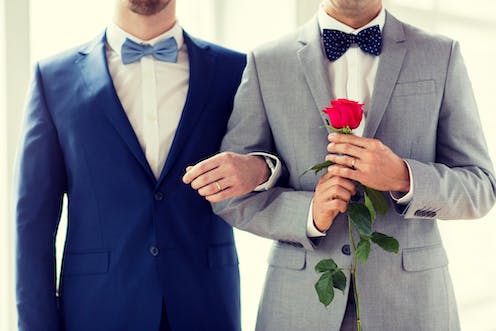 The road to same-sex marriage within churches is likely to be a long one indeed.Shutterstock

Christians were on both sides of the debate leading to last year’s historic shift to marriage equality. To date, no major denomination has publicly shifted to allow same-sex marriage. Why?

Christians were on both sides of the debate leading to last year’s historic shift to marriage equality. To date, no major denomination has publicly shifted to allow same-sex marriage. Why?

Three factors affect whether Christians support or oppose marriage equality: how they read the Bible; how they understand church tradition; and how they see the relationship between the world around them and the life of the church.

Put differently, should Christians seek to impose a moral agenda, or simply set an example? In the former case, diversity is difficult to embrace, as is change.

Nevertheless, there are more Christians supportive of marriage equality than opposed. Why, then, is progress so slow?

The first factor is misinformation leading to fear. The fear is that churches will be coerced into marrying same-sex couples. This is one factor driving the current inquiry into religious freedoms. As Robyn Whitaker has noted, churches will not be forced by the state to offer same-sex marriages.

The second factor relates to the polity and practice of the particular denomination. To make sense of this, some background will help.

Each of these structures makes decisions differently.

For instance, in most episcopal churches, bishops, often with the head of the church internationally (patriarch or pope), make decisions. These are promulgated through the bishops.

In most cases (think Roman Catholic and Orthodox churches, such as the Greek, Russian, Coptic, Syrian and so forth), episcopal governance travels in close companionship with social and ecclesiastical conservatism. Change occurs very slowly. None of these churches have change in marriage practice on their agendas. An exception in this category is Anglicanism.

The PCA issued a statement in November last year, stating its support for “the biblical definition of marriage as between one man and one woman”. No change should be expected.

The UCA is generally much more progressive. As an example, it warmly embraces leadership by ordained and lay women. The PCA does not ordain women. Most who know it expect the UCA to be the first major denomination to offer marriages to same-sex couples. But the process will not be easy.

Since 1994, the UCA has operated on a “consensual model” of decision-making. This ensures all positions are listened to, as “the aim moves from winning an argument with a pre-conceived position to seeking together to discern God’s will for the church”.

Uniting Church Ministers are given legal permission to marry under the Rites of the Uniting Church in Australia, and these rites cannot be changed until the National Assembly Meeting in July 2018 at the earliest.

It is this question of “rites” that needs to be considered. Civil celebrants use a prescribed form of words in a marriage ceremony. Religious celebrants are also required to conduct the marriage according to agreed rites.

So, if UCA ministers are to marry same-sex couples, not only must there be agreement to change practice, there must be a change in the rites (the liturgy or order of service) for marriage. In most denominations, neither practice nor rites are easily changed.

The third form of governance, the congregational form, is the most simple at first appearance. Congregations (local churches) appoint ministers and set the parameters for their life under a local church constitution.

However, for a range of reasons – shared resources, co-operation in education, insurance, political lobbying, engagement with other denominations – even congregational churches form broader unions. This body can then be a “recognised denomination” under legislation, and then can nominate ministers as religious celebrants.

Baptists in Australia vary from conservative to progressive. That they, as a non-liturgical church, ever developed a shared rite might be considered remarkable. To a develop a same-sex marriage rite might require a miracle.

We can now return to the Anglican Church. It is episcopal but with much lay involvement: decisions need to be made at national and local levels. Doctrine and liturgical commissions will each contribute to the process. The means the road to same-sex marriage within the church is likely to be a long one indeed.

Churches that support same-sex marriage and are not recognised denominations, such as the Metropolitan Community Church and Melbourne Inclusive Church, can marry people now, since their ministers are civil celebrants. Short paths come with simpler governance.