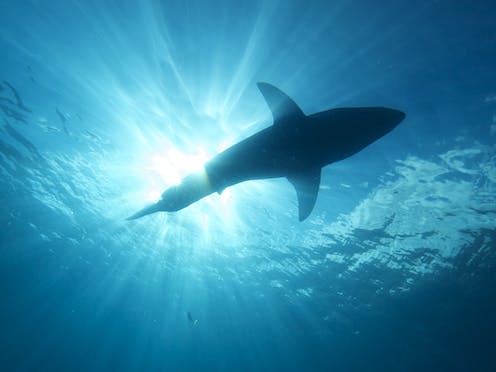 Of all apex predators, the white shark Carchardon carcharias (commonly known as the great white) is perhaps the most fascinating. The potential danger from (very rare) human interaction has embedded the species in our national consciousness.

Of all apex predators, the white shark Carchardon carcharias (commonly known as the great white) is perhaps the most fascinating. The potential danger from (very rare) human interaction has embedded the species in our national consciousness.

Debate as to the size and status of the white shark populations across the globe is both vigorous and often contested, and it is fair to say we have never had an accurate picture. Now, for the first time we estimate that the total number of adult sharks across the Australasian region is around 2,210. We’re lacking data on juvenile sharks in one region so it’s difficult to say what the total Australasian population is, but it’s likely to be in excess of 8,000-10,000 animals.

Read more: Worried about shark attacks or terrorism? Here's how to think about the real risk of rare events

CSIRO researchers working with Australian and New Zealand scientists in the National Environmental Science Program have used world-first genetic analysis to investigate white shark populations. The results of this project, published on Thursday in the journal Scientific Reports, are the first estimates of white shark adult population size, trend and survival rates for the Australasian region.

The widely used aphorism in marine and particularly fisheries modelling is that counting fish is like counting trees, but you can’t see them and they move around all the time.

Until now, researchers have had to rely on patchy sources, like historical catch data. The various shark control programs do not provide usable data on relative density over time. We do have information on white shark migration and population structure from electronic tagging and previous genetic studies, but these don’t tell us about shark numbers.

Read more: Why do shark bites seem to be more deadly in Australia than elsewhere?

To address this key problem we worked with colleagues across Australia and New Zealand to use a highly novel method called close-kin mark-recapture, first developed by CSIRO in the late 2000s to monitor southern bluefin tuna.

Close-kin mark-recapture first involves taking a tissue sample from a shark, alive or dead, obtaining a genetic profile of the animal, and than comparing it to all the other sharks and asking: are these sharks related, and if so how are they related?

Due to a number of factors, it is easier to take genetic samples from juvenile white sharks (in the 3.5 to 4m or less range) than from adults.

In the first phase, we compared the genetic data from juvenile white sharks to look for half-sibling pairs – animals who shared either a mother or a father. The half-siblings are the close-kin side of the problem. The chances of finding these pairs in the samples is determined by (a) the size of the adult population, and (b) the survival rate of adult sharks.

Higher numbers of sharks, or sharks with low survival rates, make it less likely to find siblings in the samples.

This linkage between a specific type of relatedness (half brothers or sisters) and the size and survival rate of the adult population is the mark-recapture side of the equation. In traditional wildlife tagging studies, we “mark” an animal in some way (physically or in terms of visual or genetic ID) and try to “recapture” it again sometime in the future.

The mark-recapture principle is exactly the same with this method. The key difference is that a juvenile shark carries the “mark” of its parent within its DNA, which is “recaptured” when you find a half-sibling pair. Find enough of these half-siblings, and you can estimate both adult numbers and survival rates. 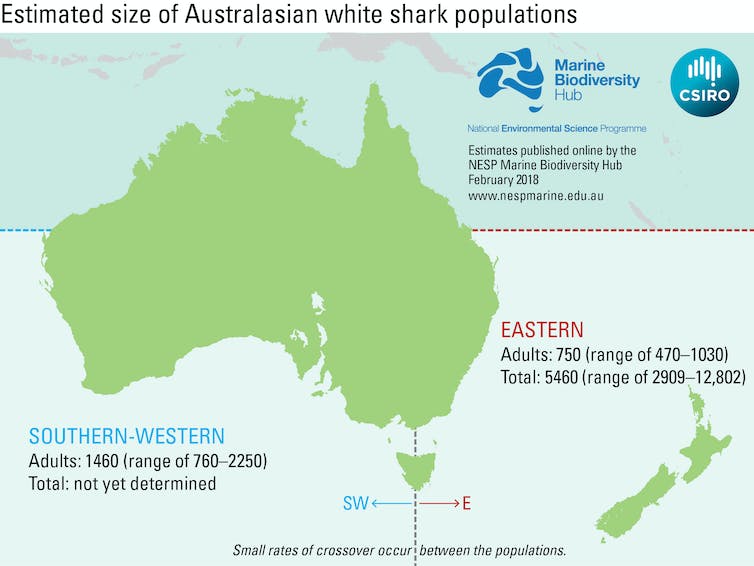 CSIRO, Author provided As part of phase one of the project we looked for half-siblings among 75 Eastern Australasian juvenile sharks and found 20. To give this some context, 75 samples permits 2,775 unique comparisons between animals. So less than 1% of those comparisons were siblings. We estimated that the number of adult sharks to be around 470 (with a range of 280-650), with at least 90% surviving from one year to the next. Given limited data there was no precise information on adult population trend. The close-kin approach can only tell us about the adult population, however. To extend these estimates to total population size, we need to know something about the survival rate of juvenile sharks. Using data from around 70 juvenile sharks fitted with acoustic emitters, archived under Australia’s Integrated Marine Observing System, we estimated that juvenile sharks had an annual survival rate of around 73%. Combining these juvenile survival estimates with the adult abundance and survival information from the close-kin analyses we estimated there to be around 4,060 (and a range of 2,500-6,750) white sharks in the whole Eastern population. After obtaining these results from the initial data, we moved onto phase two of the project. We collected and processed more samples to obtain both more data for the Eastern population, and enough samples and half-sibling matches to estimate the adult population size in the Southern-Western region. In the East we now have 214 juvenile samples, and found 73 half-siblings; in the Southern-Western case we now have 175 samples, and found 27 half-siblings. The revised estimates of adult population size in the East were around 750 (with a range of 470-1,030) and annual survival probabilities of 93%. Revised estimates of total population size in the Eastern region were around 5,460 (with a range of 2,909-12,802). Our initial estimates of the Southern-Western adult population were around 1,460 (with a range of 760-2,250) and that survival probabilities were very high (in the 90% and above range, as for the East). So these estimates suggest there are almost twice as many adult white sharks in the Southern-Western population relative to the East. Are shark populations increasing? In Australia white sharks have been protected under the Federal Environment Protection and Biodiversity Conservation Act since 1999. Between 1995 and 1999 a national recovery plan was in effect. protected under various state legislation and subject to a national recovery plan. We found that in both populations the adult population trend since protection has been essentially flat, with no evidence for a substantial increase or decrease. However, the picture is more uncertain when it comes to estimating population changes for younger white sharks. White sharks take 12-15 years to mature. Assuming protection of the species reduced the juvenile mortality rate, then any such effect will not be apparent in the adult population until the next 5-10 years. Read more: Not just nets: how to stop shark attacks without killing sharks Balancing the conflicting goals of conservation and human protection is at times difficult and contentious. But, unquestionably, without being able to monitor populations effectively there is no way to resolve these questions. Now we can monitor juveniles through electronic tagging programs, and keep track of adult populations with the close-kin method, we should finally have solved the problem of how to track the population size and status of this iconic predator.