He later announced that he would move to cap health insurance premiums for two years.

What makes the private health insurance rebate so controversial, and could we scrap it altogether?

What is the private health insurance rebate?

Read more: Is the investment in private health insurance worthwhile?

The other policies are the Medicare Levy Surcharge (a tax paid by singles who earn more than A$90,000, or families with income over A$180,000, if they don’t have health insurance), and Lifetime Health Cover (which means that if you don’t get insurance by age 30 you’ll pay more for it later).

For several years, rebates covered 30% of health insurance premiums for most people. Means-testing of rebates began in 2012, under which individuals and households with higher incomes received a lower subsidy.

In 2014 the government introduced a new formula, under which rebates are partly indexed to the growth in the Consumer Price Index. As a result, rebates as a percentage of premiums have been gradually falling, year on year.

Why are the rebates controversial?

They are expensive. The premium rebates cost A$1.4 billion when they were first introduced, and by 2015-16 this had risen to A$5.7 billion. While means-testing and indexation have slowed this growth somewhat, spending on the rebates is projected to increase A$6.7 billion in 2019-20.

If their intended purpose is to take capacity pressures off the public system, they aren’t working well. The rebates are meant to work indirectly, by encouraging Australians to buy private cover, and when they need hospital services use the private system and avoid the public system.

Read more: Explainer: why do Australians have private health insurance?

Whether the rebates work or not depends on policy holders choosing to use their private cover when they need to. This is less and less likely to happen, given the increasing trend in the number of policies with exclusions and excesses. 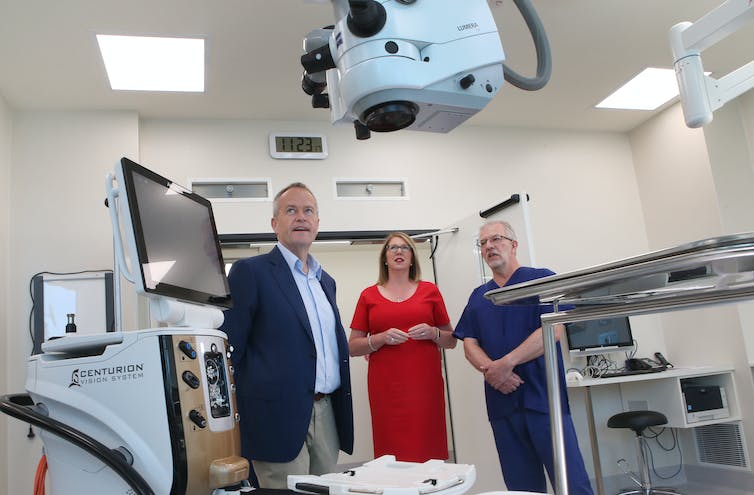 Bill Shorten has proposed capping the amount insurers can raise their prices at 2% for two years. David Crosling/AAP

In fact, the opposite of this intended effect could be happening, if private hospitals focus on (cheaper) patients with straightforward medical conditions, and leave the complicated (expensive) cases to the public system. This is known as “cream-skimming”, and there is evidence that it is indeed happening in our hospital system.

More broadly, in the Australian system, where doctors can work in both public and private sectors, measures aimed at helping the public system by subsidising private activity can be counterproductive if doctors choose to spend more time on better-paying private work.

What should we do with the rebates?

There is an economic case for doing away with the rebates. Evidence from economic modelling indicates there are net savings to the public budget if rebates were removed or reduced.

Where do these savings come from? First, there would be direct savings from not having to pay for the rebates.

As the rebates are wound back, the government would need to spend more to take care of those who drop their private cover, and choose the public system when they need hospital care.

The modelling suggests there are net savings because the savings from the rebates outweigh the additional spending.

If rebates were to be wound back today, there remain significant financial incentives for individuals to keep their private health cover, especially among high-income individuals who are liable for the Medicare Levy Surcharge. Individuals who have strong preferences for private hospital care are also likely to maintain cover.

On the other hand, those most likely to drop cover include individuals who are just liable for the surcharge and would no longer justify paying for coverage, and instead choose to pay the levy.

It’s important to highlight that this evidence, while still relevant, is also relatively dated and the current environment is different from 2013 when the study was undertaken. The most notable difference is the trend that consumers have downgraded or dropped cover, partly in response to the sustained growth in premiums over the past decade.

There is an urgent need for updated independent research to assess the effects of removing rebates on who keeps or drops private health cover, and its subsequent effect on the public health care system.

Where could the savings be used?

Private health insurance rebates are funded by taxpayers, and every Australian has the right to expect their tax dollars to be used as effectively and efficiently as possible.

Any credible discussion on reducing or removing rebates will need to involve how savings are to be used. Savings should be re-invested into expanding the capacity and improving the quality of our public hospital system. The perceived quality gap in public and private hospitals is one reason why Australians buy private health insurance.

Savings should be directed towards shortening wait times by increasing the number of elective services, improving the quality of care, and attracting and retaining our best doctors in public hospitals.

We are all beneficiaries of a well-resourced and well-organised public hospital system – one that will be there when we need it most, regardless of our ability to pay.