This article is part of a series that draws on the latest research on back to school transitions. In it, experts explain how best to prepare children for school, and counter difficulties such as stress or bad behaviour.

Starting school for the first time can be stressful. Children are suddenly thrown into a foreign environment, juggling the pressure of learning new academic skills and establishing relationships with peers. Some thrive, but others may need support through this transition.

Our study found that at the ages of six to seven, which is just after the time children start school, 14% of Australian children had noticeably high levels of emotional problems. Emotional problems generally refer to depressive and anxiety symptoms, somatic (physical) complaints such as headaches, and withdrawn behaviours.

There are roughly 1.5 million children aged six to seven going to school in Australia. This means around 200,000 of them are dealing with some kind of emotional problem. These problems become worse as the children progress through school. We found that three years later, when the same cohort of children were ten to 11, an additional 60,000 had developed symptoms of depression or anxiety.

Read more: How to gently prepare your child for prep

A 2015 report from the Australian Early Development Census (AEDC) has warned that one in five (22%) children who enter school in Australia is developmentally vulnerable in one or more areas, including emotional maturity, communication and cognitive skills (such as memory).

It was also noted that children’s mental health was becoming worse since the 2012 report. The emotional maturity domain, for instance, saw a decrease in the number of children developmentally on track (from 78.1% to 76.4%) and an increase in the number of those who were developmentally vulnerable (from 7.6% to 8.4%) and at risk (from 14.2% to 15.3%).

While we know emotional problems are prevalent among young Australians, we have little knowledge of how these issues develop throughout childhood. Such knowledge is crucial to inform early prevention and intervention, and to alter the development of emotional problems into adolescence and adulthood.

Read more: Australian teens doing well, but some still at high risk of suicide and self-harm

The LSAC explores areas such as children’s social and emotional development, the health status of children and their families, learning and cognition outcomes, parenting, and relationships. This information is collected through face-to-face and telephone interviews, as well as computer-assisted self interviews and/or questionnaires. 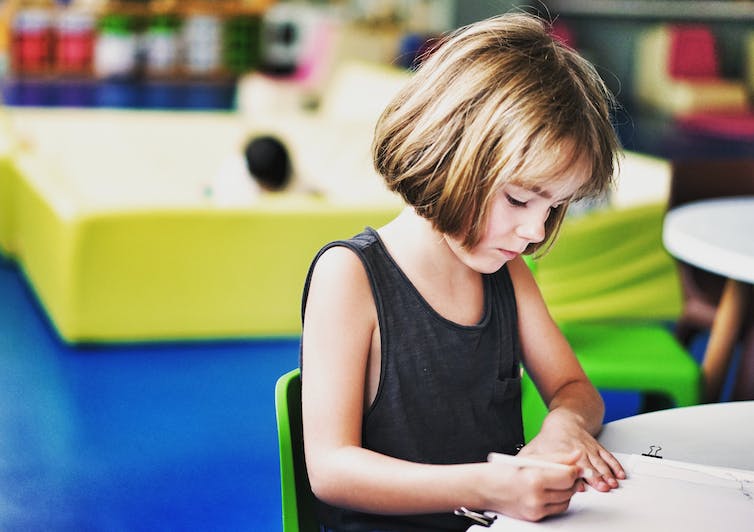 Girls are more at risk of their emotional problems escalating than boys. Photo by pan xiaozhen on Unsplash

We analysed the data on the emotional problems of 3,200 children from the kindergarten cohort who had completed questions relevant to our study; first at the ages of six to seven, then again at eight to nine, and ten to 11. We found that children’s emotional problems, on average, were increasing over time.

However, the rate of increase did not differ based on children’s initial emotional vulnerability.

What are the reasons?

In addition to analysing data on the rates of children’s emotional problems, we also identified a range of risk and protective factors that fall into four categories: individual aspects, social and cultural environment, parenting, and peer group experience.

We found a number of factors to be associated with the increase in emotional problems of the children in our sample over time. For example, compared to boys, girls started with higher levels of emotional problems at six to seven years, and these escalated at a faster rate. There is well-established evidence that adolescent girls often have more emotional problems than boys, but the evidence in childhood is not robust.

Read more: Why we should put yoga in the Australian school curriculum

Our findings suggest that girls with early signs of emotional problems, and their parents, should be considered for parent and child development support programs in the early years of school. Signals can include showing anxiety, chewing nails, not being able to make friends, having sleep problems and signs of depression.

We found peer problems to be an important risk factor linked to children’s escalation of emotional problems, especially during the transition to school. Peer problems include issues such as not being able to make friends, having difficulty getting along with peers or being picked on by other children. Children need to learn skills related to making friends and maintaining friendships, such as cooperation, sympathy and helping others.

Read more: Back to school blues: how to help your child with shyness

One thing to note is that the absence of peer problems does not necessarily suggest the presence of positive relationships. Teachers tend to view children without problematic behaviours more favourably than children with problematic behaviours, and so are less likely to support them. However, lack of peer problems might also mean that the child is isolated and does not have many friends.

It’s important that teachers and parents proactively assist children to develop their social skills. Among the most important ones are to encourage children to help others, cooperate, express their emotions and understand others’ emotions.

This suggests that the early years may represent a sensitive period during which maternal mental health problems have lasting and harmful implications on children’s emotional wellbeing across middle childhood.

Read more: How to gently prepare your child for prep

How parents can help

Two important ways in which parents can prepare their children for school is by teaching them self-regulation and friendship skills.

To have better self-regulation skills, children need to learn to have some discipline early on. Trying to stick to a schedule, for example, is important.

Also important is helping children understand their emotions and express them in a constructive way – for example, to be able to say when they feel frustrated instead of having a tantrum.

To help children have better friendship skills, parents can encourage them to help other children, be involved in group activities with them and to act sympathetically towards others.

More resources for parents can be found here, and here.