Did you know that when you take certain genetic tests, the company can make money by on-selling your data to other businesses?

Now new blockchain-based marketplaces could give individuals control over access to their encrypted DNA data, and the ability to sell it to research companies for their own profit.

Read more: It's time to talk about who can access your digital genomic data

The ‘Google of personalised health care’

Consumer DNA testing saw unprecedented public demand in 2017. By one estimate, 10 million genetic tests were conducted on individuals by companies such as AncestryDNA.

People using these services may not realise that the real money for some of these companies could lie in the sale of genetic data to third parties for medical research. A 23andMe board member reportedly explained this in 2013:

The long game here is not to make money selling kits… Once you have the data, [the company] does actually become the Google of personalised health care.

Understanding the complex relationship between genetics and disease requires powerful statistical tests. The genomic healthcare revolution therefore needs many genomes for its fuel.

At the same time, genomic data can reveal highly personal information about us (and our relatives), especially when paired with our very private health data. There are competing interests between individuals, corporations, and the research community. 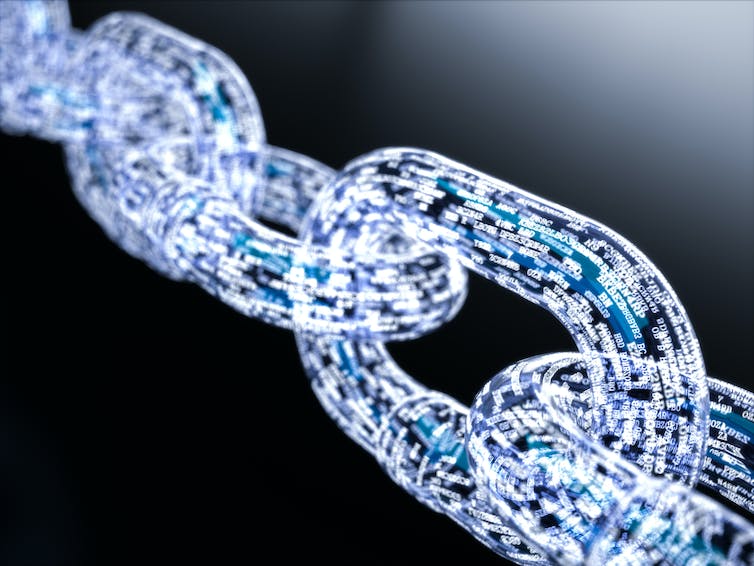 Blockchain is proving useful for much more than cryptocurrencies. Shutterstock

How could blockchain-based DNA marketplaces address these issues?

Marketplaces for buying and selling DNA data would be established by the creation of dedicated cryptocurrency “tokens”.

People will be able to sell their (encrypted) genomic data to researchers for tokens, which they can cash out or use to buy services, such as disease risk reports.

All transactions would be securely recorded on the blockchain.

This is a fledgling industry and we’re likely to see more startups in this space. To gauge what this new ecosystem might look like, we spoke to representatives from three companies: David Koepsell, chief executive of Encrypgen, Bob Kain, chief executive of Luna DNA, and Alexey Gorbachev, a founder of Zenome.

Of these three platforms, Encrypgen seems to be the farthest along. It is free to upload and securely store genomic data for up to five family members (including pets), and share data with your doctor.

Consumers can use one of the sequencing providers on the private blockchain, or upload their DNA sequence from another provider. Access is controlled by the user. If DNA data comes from another provider, you may have already signed an agreement that allows third-party data access.

You will be notified if someone wants to buy access to your genome (using Encrypgen’s $DNA tokens) and can say yes or no. You can remove your genome from the service (and future access) whenever you want, but any use previously granted would continue.

Zenome’s platform makes use of the computing resources of many “nodes” (different people’s computers) in a distributed approach to genomic analysis. To protect user privacy, genomic data is fragmented so that no node has a full copy. Personal information is stored on a user’s own computer and encrypted.

Initially, it will be free to upload data. In return you receive secure storage and a free report about your health and origin. Users can sell access and buy analysis services using Zenome DNA (ZNA) tokens.

Users can upload data to Luna’s protected database if they provide broad consent to studies. Users will receive Luna Coin in return for important information such as health data.

This broad consent will allow relevant third parties (like academic researchers and pharmaceutical companies) to conduct discovery projects on de-identified data for a fee. Luna won’t reveal user information, but if a third party is interested in conducting clinical trials on a specific genotype then Luna would facilitate the introduction and relationship (with the user’s consent). As the database grows, its value increases.

Luna DNA is not initially offering analysis services: the primary aim is to enable genomic research.

Are you going to get rich from this?

Probably not. The dollar value of our genome is difficult to guess, and it’s also likely to increase as we find new uses for the data. Zenome estimates that 23andMe has made US$130 million to date from selling access to one million genotypes to pharmaceutical companies – which breaks down to US$130 per genotype.

The story of Henrietta Lacks has been mentioned in relation to these systems. Her cell line (HeLa) was taken without consent and has gone on to make untold wealth for the biomedical industry. It’s unlikely that one genome alone would lead directly to such massive profits (although it’s impossible to rule this out).

Henrietta Lacks, whose cell line HeLa has made fortunes for the biomedical industry. Wikipedia

It is most likely that you would sell access to your data for the purposes of a study, like participating in a drug trial, and sign an agreement that precludes ownership in any patents resulting from that participation.

For research studies, the value of a genome is going to be strongly influenced by the amount and quality of medically relevant data attached to it, for example a family history of heart disease.

Some genomes may be more interesting than others, for example supercentenarians – people over the age of 110 years. Carriers of rare genotypes, or people with particular diseases will likely also be more desirable for research purposes.

Are there any risks to this solution?

Read more: The blockchain does not eliminate the need for trust

Any system has risks and it is still very early days for these startups. Only the future can tell how each will deal with these issues during their implementation.

The actual ownership of our DNA and its digital representation is currently legally unclear. Research shows that people are more likely to participate in genomics research when privacy policies clearly indicate their ownership of their own data and control of its use.

Regardless of the legal situation, what these companies are proposing should grant control of genomic data to individuals. This seems like a step in the right direction.