Much of the tennis world was looking to the 2018 Australian Open to be the story of comebacks.

Although some players have returned to start their season at the Australian Open, others have not. Five-time Australian Open finalist Andy Murray was the biggest name among the early withdrawals.

Rather than a time of comebacks, 2018 is shaping up to be a season of delayed starts and ongoing depletion at the top of the game. It’s a trend that signals a systemic problem in men’s tennis, which can’t be shrugged off as the misfortune of a few.

Read more: All the racquet: what science tells us about the pros and cons of grunting in tennis

The 2017 US Open was struck by an epidemic of injuries. This resulted in an all-time low number of top 10 players in the draw, including the absences of then No. 1 Andy Murray and No. 4 Novak Djokovic.

Injuries in sport are complex and can’t be attributed to any one cause. Yet the recent rise in injuries among the best men’s tennis players compels us to look for some widespread contributing factors.

In this regard, a closer look at the amount of competitive play that has become the norm among top players is telling. A men’s Grand Slam match can have as few as 18 games or as many as 183 games played, as in the John Isner-Nicolas Mahut Wimbledon marathon of 2010, or more.

So let’s focus on game age – the number of professional games played up to a certain age – to measure a player’s competitive age more precisely.

Breaking down the game age of ten players from the 1970s to the present clearly shows that today’s players are playing more at earlier ages than ever before.

In the time of Björn Borg-John McEnroe, for example, top players were usually 25 years or older before they had accumulated 10,000 games played. In the Murray-Djokovic era that age has dropped to 23. 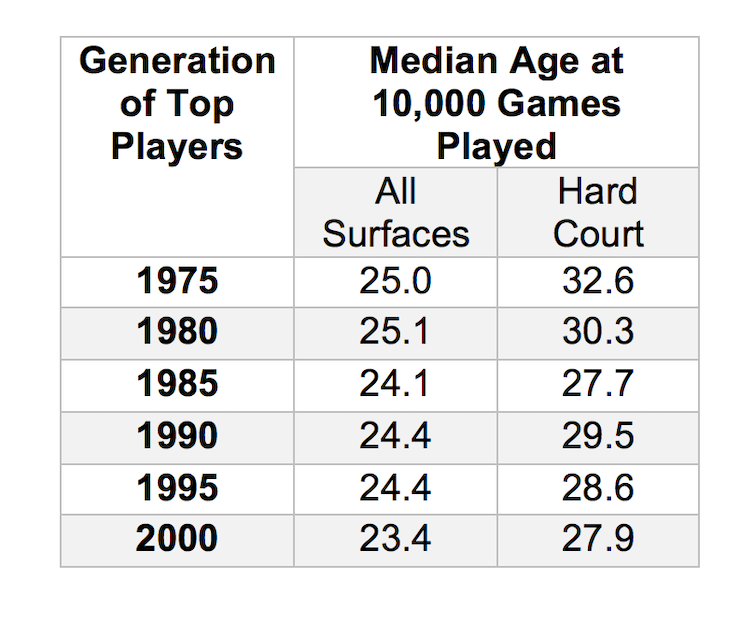 This trend is even starker when we account for surface.

Hard courts, the surface considered most stressful on the body, make up 60% of the highest-level events in the men’s tennis season, and the disparity between accumulated games played on hard court across generations is even greater than all surfaces combined. 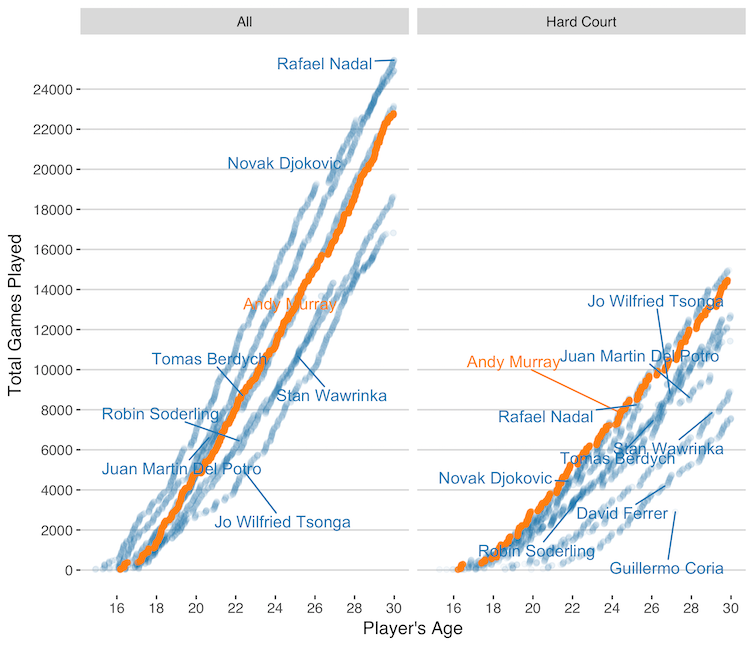 Although Murray’s all-surface game age is not dissimilar to other top players of his generation, he is one of the oldest players in terms of his hard court age.

Both Murray and Djokovic ended their 2017 season after the Wimbledon Championships in July due to injury. It is notable that both have some of the highest hard court game ages of any top player in their age group.

Game age is the most detailed measure of competitive play that we have over long periods of tennis history.

But even an equal game age today isn’t necessarily equal to the same game age of past players. The main reason is that, over time, players are not only bigger and stronger, they are also playing a more gruelling style of tennis. Long points at the baseline are more common than ever before.

With modern tracking data, my research at the Game Insight Group at Tennis Australia shows that Murray, one of the biggest ralliers in the game, has the highest work rate per point over the past five years at the Australian Open of any top 30 player.

Murray is an outlier in this respect, but he is indicative of a broader trend of rising intensity of play in men’s tennis.

The nature of single-elimination tournaments in tennis creates a double-edged sword for the best in the game. Winning more requires playing more, yet playing more appears to increase the risk of a major injury.

With the amount of game play catching up with the top of the men’s game, up-and-coming players are no doubt worried about how they can both emulate those top players’ results while avoiding the same physical costs.

For many, Roger Federer, one of the most successful tennis players of all time who, at the age of 36 (ancient by tennis standards), is the favourite to win the Australian Open, is emerging as a singular example of how to have success and longevity at the highest levels of the sport.

Federer has had the longest career of the “Big 4” – the four men who have won most of the majors in recent years, the others being Rafael Nadal, Djokovic and Murray – and has also been the most injury-free.

It’s not likely a coincidence that Federer, in preferring a more aggressive style of play, plays the least physically demanding style of tennis of the group.

He has also become much more selective in his schedule over time. Federer played fewer lower-level events and skipped the entire clay court season in 2017, reserving his game age for the biggest events where he is best positioned for a title run.

Read more: We need to ‘climate-proof’ our sports stadiums

After losing to Murray in 2008, Federer made the following cautionary statement about Murray’s future:

Federer couldn’t have imagined how prescient those words would be today, or that they would become a cautionary message for all top players to heed.

Changing playing style and cutting back schedules to avoid the grind aren’t easy options for current players, but players could have to consider these options if they want to ensure long and healthy careers.