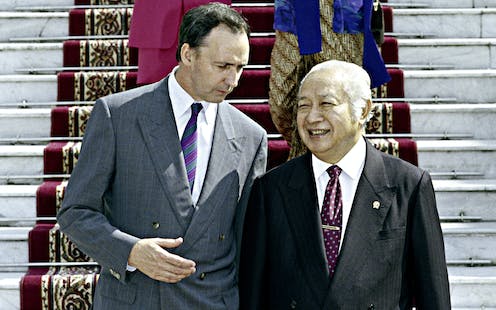 Despite its short lifespan, the signing of the Australia-Indonesia Agreement on Maintaining Security in 1995 marked a particular milestone in the history of the two countries’ relationship.

From the Indonesian perspective, the agreement was considered somewhat effective in building common interests to promote regional security and stability. Indonesia perceived the agreement as complementary to the 15 years of Australia-Indonesia military co-operation that had already taken place.

To some extent, the agreement also enriched Indonesia’s existing bilateral military co-operation with selected countries in the region.

Indonesia once assumed that the agreement was also meant to build confidence and ease Australia’s anxiety over regional security. Australian federal cabinet papers from 1994 and 1995, released today by the National Archives of Australia, support this presumption.

A gesture from down under

Cabinet submissions show Prime Minister Paul Keating first raised the idea of a security agreement in June 1994 with Indonesian President Soeharto. Discussions on the draft were relatively efficient: the text was agreed one month before the treaty was signed in December 1995.

Keating is remembered as one of the most Indonesia-friendly Australian prime ministers. He has frequently argued that relations with Indonesia should be an Australian foreign policy priority.

Keating’s cabinet submission strengthens his image as an Indonesian “diplomat” while prime minister. Unlike previous administrations, members of the Keating government visited Indonesia four times per year. This showed his strong personal interest in building a sustainable relationship with one of Australia’s nearest neighbours.

The agreement with Australia was Indonesia’s first bilateral security agreement. It emphasised the friendly relations between the two countries in the early-to-mid-1990s. This contrasts with the late 1990s, when enmity dominated relations amid the East Timor dispute.

There were some concerns in Indonesia over the agreement, including questioning its impact on the wider southeast Asian region. However, these were not as strong as protests in Australia, where some claimed the agreement showed Keating supported Soeharto’s dictatorship.

The cabinet records not only reinforce Keating’s strategic interest in Indonesia, they also reflect Australia’s anxiety on certain issues.

From a regional perspective, the treaty reassured others of Indonesia’s commitment to building common security interests. From the Keating government’s point of view, the process of securing stability in the region should begin on its doorstep. So Indonesia has a dual purpose for Australia: a near neighbour, and an entry point for securing regional security.

The cabinet records also disclose that the agreement was seen as a means to ease Australian anxiety on uncertain strategic change in southeast Asia. This aligns with the region undergoing a post-Cold-War security transformation in the 1990s, particularly in the relationship between ASEAN and Indochinese countries (such as Vietnam, Laos, Cambodia).

Keating’s submission also supports his statement that Australia’s success in Asia would determine its success elsewhere. For him, the security agreement with Indonesia would help enrich Australia’s existing arrangements in the region.

The cabinet records confirm Australia’s anxiety on what would happen once Soeharto left office. The treaty itself was therefore seen as a way to bind Indonesia’s commitment to co-operate with Australia.

Keating argued that the treaty might not necessarily prevent Australia from any possible disputes with Indonesia. But it could help Australia to handle what – and who – followed Soeharto as president. This expectation was far from true, given Indonesia’s decision to terminate the treaty in 1999 due to Australia’s intervention in East Timor.

The period in Indonesia following Soeharto’s resignation in 1998 was unpredictable. The assumption that the security agreement would be helpful indicates that Australia did indeed have strong fears of Indonesia’s upcoming reformasi.

However, Indonesia’s succession was a domestic issue. It would not have threatened Australia’s strategic security in any way – but for the Howard government intervening in East Timor.

The Labor government’s defeat in 1996 and the conclusion of the security agreement in 1999 were once misunderstood as the end of the Australia-Indonesian friendship. Indeed, it wasn’t until 2006 that the two countries developed the Lombok Treaty to revive security co-operation.

The cabinet records show that Keating’s legacy has proven relevant: Australia’s defence relationship with Indonesia is its most important in the region. It has built a strong base to extent the scope of co-operation between the two countries to economics, counter-terrorism, and law enforcement.