A Senate Committee report on shark deterrent measures has, in the words of committee member Senator Peter Whish-Wilson, moved the “shark cull debate into the 21st century”.

The first recommendation of the inquiry is to “immediately replace lethal drum lines” with so-called SMART drum lines and to phase out shark nets.

Yet if the news media are to be believed, these conclusions go against the grain of public opinion, with Western Australia’s spate of shark incidents having spawned previous headlines such as “Calls grow louder for shark culling in WA”. More recently, a series of incidents in Ballina in northern New South Wales prompted our surfing former prime minister Tony Abbott to weigh in, calling on the state government to authorise culls and nets.

Read more: Sharks aren’t criminals, but our fear makes us talk as if they are

The question of how much the public really supports policies that kill sharks has been surprisingly difficult to answer. The Senate inquiry noted that while it had been suggested “that lethal measures such as nets are no longer supported … reliably ascertaining community views on matters such as this could be quite difficult”.

Difficult? Yes. But doable. We have surveyed public opinion in Western Australia and Ballina, following shark bite incidents in each place. In fact, over the past five years we have searched high and low for the type of widespread support for lethal policies that is suggested by the tabloid press. It simply is not there, as our findings in the peer-reviewed journals Conservation Letters and Marine Policy show.

Public opinion in Perth and Ballina

In fieldwork including phone polling in both Perth and Ballina, as well as face-to-face surveys of local residents, beachgoers, and business owners in Ballina, we consistently found levels of support for lethal policies in the 20-25% range.

This is particularly remarkable in the case of Ballina. As the shire’s mayor David Wright told the Senate committee, between 8 February 2015 and July 2016, surfers there “were involved in 9% of the world’s shark attacks and interactions”, with the media dubbing it the “shark attack capital of Australia”.

A large majority of people in both Perth and Ballina viewed shark bites as accidental rather than intentional. While fear of sharks is linked to higher support for lethal policies, fear alone does not cause people to support killing sharks.

Support for lethal policies arises when fear of sharks is combined with the misconceived idea that sharks bite people on purpose. In our surveys, respondents who view shark bites to be intentional were more than 2.5 times as likely to support policies that kill sharks. 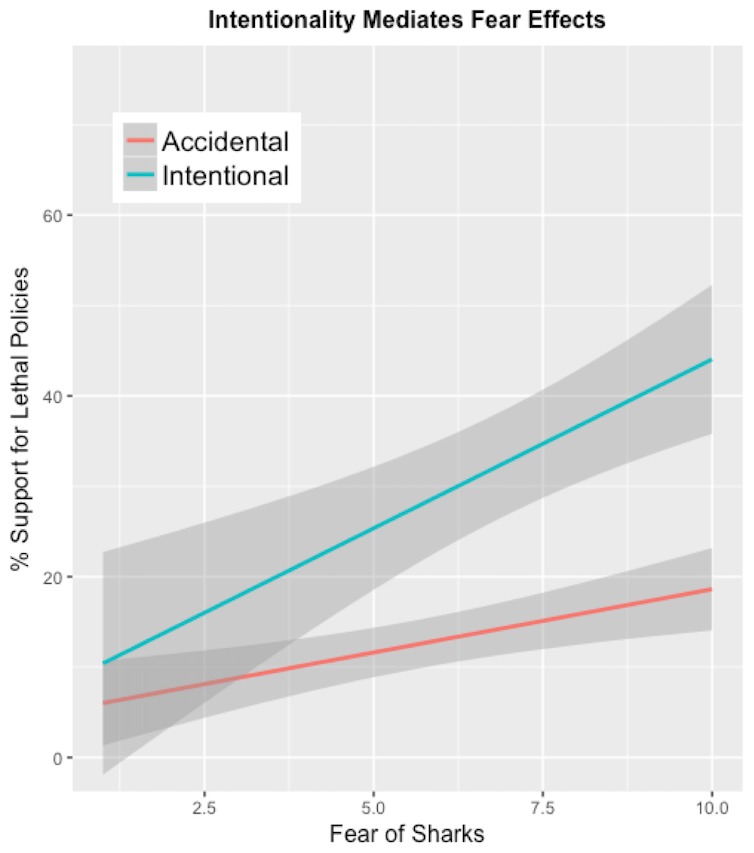 Author provided This is strongly related to the Senate inquiry’s finding that the belief that “killing ‘rogue’ sharks will solve the problem” remains widespread. This is despite a clear expert consensus that there is “no evidence for anything called a rogue shark”. As the Department of the Environment and Energy says, “No shark is thought to target humans as prey”, and the vast majority of shark bite incidents “can be attributed to the shark confusing us with its normal prey”. This view was apparent among the relatively few beachgoers in Ballina who reported supporting lethal policies, with several respondents suggesting that they would only support killing sharks that “had gotten a taste for human flesh”. Many respondents were also unaware that shark nets are lethal to sharks. Indeed, this is their primary purpose, as the Senate inquiry noted: “It is not intended that the nets create an enclosed area: rather, they are a passive fishing device designed to cull sharks in the area.” Understanding overcomes fear Our second study looked specifically at the interaction between fear of sharks and the perception that they bite humans intentionally. We carried out an experiment in the Sydney SEA LIFE Aquarium’s “shark tunnel” – a one-way, U-shaped exhibit that provides perfect conditions for our study. We divided participants into two groups and assigned one group to a treatment to “prime” their emotions at the beginning of the exhibit. We also surveyed all participants about their feelings about and perceptions of sharks, after viewing the exhibit. This also allowed us to capture both a before and after measurement of fear, from which we could determine whether people’s fear had subsided after seeing sharks’ behaviour at first hand. We tested two “priming” messages. One called attention to the low probability of being bitten by a shark – we call this our Probability Prime. A second priming message drew “attention to intentionality”. This was our Intentionality Prime and it prompted aquarium visitors to consider sharks’ behaviours. The Probability Prime, which reflects standard marine education attempts to reduce fear of sharks, failed to do so, consistent with research showing humans overestimate low probability risks. Crucially, considering our findings in Ballina and Perth, the Intentionality Prime successfully reduced the public’s fear of sharks. 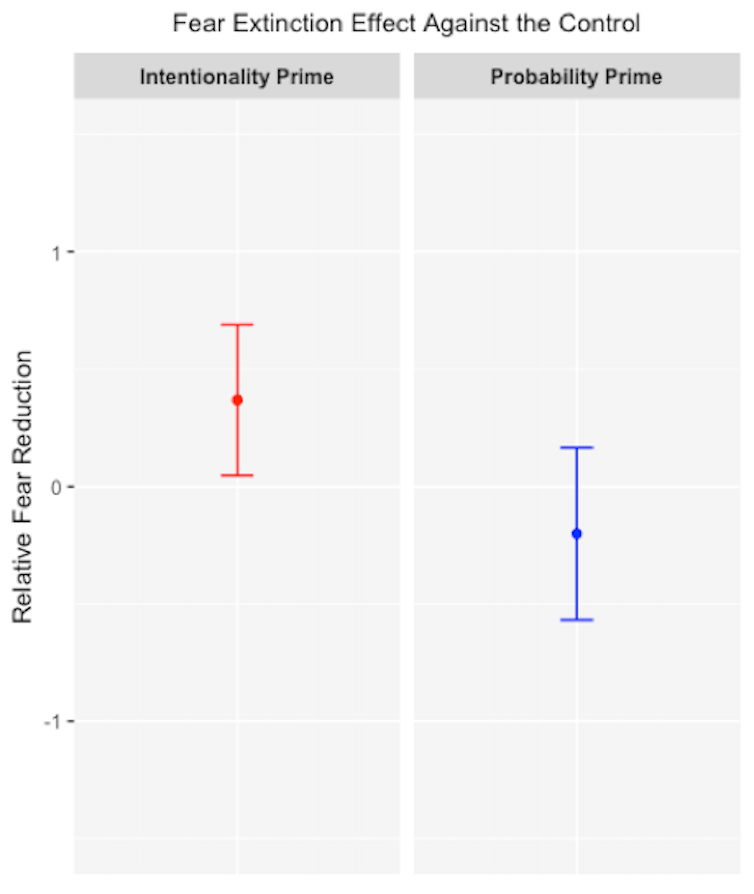 shark fear. Author provided There are five take-home messages from our research results: There is little blame on the shark. The tide has turned and the public is sophisticated enough to understand that sharks are not intentionally hurting people. There is little blame on the government. Governments that feel they need to continue using shark nets or else face the wrath of the public following a shark bite should rework their political calculations. The public no longer supports policies that kill sharks. In WA, 75% supported non-lethal options, in Ballina the number was 83% and in the Sydney experiment it reached 85%. A Save the Sharks movement has begun, with the public we have polled consistently voicing greater support for conservation approaches above killing sharks. Survey respondents believe that governments choose lethal measures to ease public concern, not to make beaches safer. This is a problem for Australia’s democracy; the public believes that policies are being designed to protect governments, not people. This last point is arguably the most serious flaw of all in these policies: the continued killing of sharks for political gain.