Many Australian women with endometriosis are reporting they’re being advised a reliable treatment or even possible cure for their endometriosis is to “go away and have a baby”. This message is consistent with what women from other countries are also being told by a wide range of sources from self-help books to web forums to medical professionals.

Pregnancy as a natural cure for endometriosis appears to date back to the early 20th century. However, even into the 1950s and 1960s, when pregnancy was commonly recommended as a treatment for endometriosis, this evidence was based mostly on case reports of women whose endometriosis improved during pregnancy. Case reports are often unusual findings and don’t necessarily reflect what happens to most people.

Endometriosis and the lack of a cure

Endometriosis is the presence of tissue similar to the lining of the uterus outside the uterus itself. Accurate estimates of how many women in Australia have endometriosis are hard to find, but a common figure is around one in ten women during their reproductive years.

While severe pain during the period is a common symptom of endometriosis, it’s so much more than just a “really bad period”. There’s almost no area of women’s lives that is not negatively affected by the condition.

Current medical treatments, often using hormone therapy, are not always effective. And the side effects of many of the hormonal treatments can be particularly unpleasant for women, leading them to stop treatment.

Excision surgery, in which the endometrial lesions are cut away, is the most effective current treatment. But surgery is not something most women enter into lightly, given the cost and risk of undergoing surgery. Unfortunately, even surgery is not always successful with around 50% of women having symptoms reoccur after five years.

When we look at women around the world, it looks like having children does decrease the amount of period pain women have. A significant problem with this is we don’t know if these women had endometriosis, and these kinds of studies can’t tell us for sure if getting pregnant was responsible for this reduction in period pain.

Read more: Women aren’t responsible for endometriosis, nor should they be expected to cure themselves 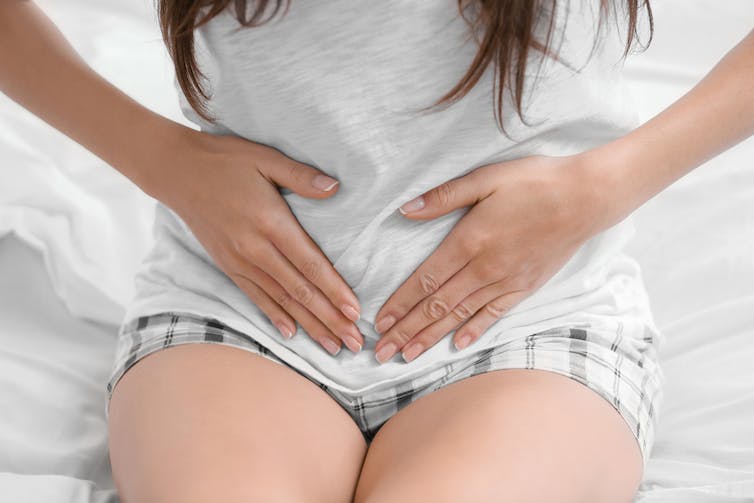 Endometriosis is incredibly debilitating for women, and there’s no cure. from www.shutterstock.com

Pregnancy, pain and the brain

Women with endometriosis, like other chronic pain conditions, have changes in the way their brains process pain. Nerves, especially in the pelvis, are also more sensitive than in women without chronic pain. The concept of “calming” these hyperactive pain pathways is an important treatment strategy in treating chronic endometriosis pain. Each time menstruation occurs it irritates these sensitive nerves and reinforces these pain pathways.

One way to prevent this reinforcement of pain pathways can be by stopping regular menstruation entirely. This is a key reason women with endometriosis are so often treated with continuous use of hormonal contraceptives.

After giving birth, it’s quite possible the pain, if it had decreased, will return. This is especially true once women start having regular periods again, as there’s no evidence pregnancy shrinks endometrial lesions or changes pain processing in the long term, both major drivers of endometriosis pain.

Should pregnancy be recommended as a treatment?

Pregnancy might help reduce endometriosis symptoms, if only temporarily. But women with endometriosis often rightly feel upset and offended when advised to have a baby as a treatment strategy.

There are also risks involved, as women with endometriosis are more likely to have pre-term births, increased rates of caesarean sections and an increased risk of miscarriage.

Women shouldn’t have to bring another human into the world to relieve the pain of endometriosis. This is why we need to prioritise understanding the cause of endometriosis, finding effective treatments and eventually a cure.