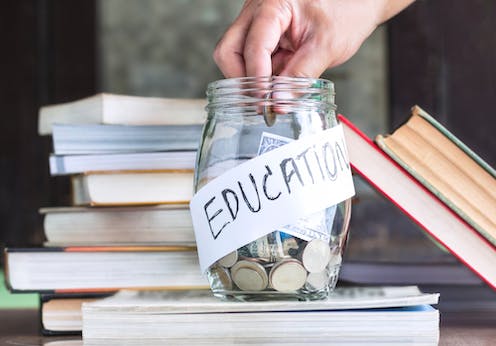 The uneven approach between VET and higher education in particular reflects an ongoing failure to conceive of the two as part of a single tertiary education system.Shutterstock

There is a stark difference between schools, VET and higher education spending in Australia, according to our research published today.

There is a stark difference between schools, VET and higher education spending in Australia, according to our research published today.

The Mitchell Institute’s 2017 report shows that while spending on schools and higher education continues to grow, vocational education and training (VET) expenditure is going in the opposite direction. We are spending less on VET now than we were a decade ago, in real terms.

Read more: Government spending on education: the winners and losers

The chart below shows the trends in expenditure over an 11-year period to 2015-16. This analysis uses 2005-06 as the base index year. Indexing enables comparison of change over time from a common starting point, which is 100 here. So, an increase from 100 to 102 would represent a 2% increase. All expenditure values are in 2015-16 dollars, converted to real terms using a GDP deflator.

This analysis was done using Australian Bureau of Statistics (ABS) data. While more detailed data are available for each education sector through different collections, the ABS applies the same method for estimating expenditure for each sector. This makes it the best means of making a comparison across schools, VET and higher education.

The figures include all expenditure by government entities – meaning by governments (to both public and private education providers) and also by public schools, TAFEs and universities. This gives us an approximate picture of where the dollars are flowing, and how this is changing over time.

What’s important here is the increasing disparity in expenditure growth between the sectors, particularly between VET and higher education.

This comparison confirms widespread concerns about VET going backwards. Expenditure in 2015-16 was 4.7% below the level in 2005-06.

This tells a worrying story about quality vocational education and training not being a priority for governments.

Key growth employment areas like aged care, early childhood education and hospitality rely on vocational training for skilled workers. Building up vocationally qualified workers in the growing service and caring industries will be essential, particularly as employment in the manufacturing sector declines.

Universities going from strength to strength

Higher education has followed a very different path. Spending has grown by 53% over the 11 years from 2005-06.

These figures include spending on more than just teaching and learning and universities have other significant sources of revenue, including international students.

Even so, it is clear that governments, and Australians collectively, are prioritising spending on university education over vocational training.

This is the second time preschool has been included in this overview of education expenditure.

The chart below compares growth in expenditure on preschool, alongside the other education sectors over the same 11-year period.

Although coming off a much lower base, preschool spending grew rapidly following the National Partnership Agreement on Universal Access to Early Childhood Education in 2009. This growth reflects a growing awareness of the importance of the early years among governments.

What this all means

This comparison shows where we are focusing our education resources as a nation.

These diverging patterns of expenditure across the education sectors reflect our longstanding fragmented approach to policy and funding, particularly at the tertiary level.

Under current policy settings, it is not hard to imagine the already considerable discrepancy between VET expenditure and higher education and school expenditure continuing to grow.

This report, the fourth in the series, should prompt government to consider a more strategic approach to distributing resources across the education sector.

The uneven approach between VET and higher education in particular reflects an ongoing failure to conceive of the two as part of a single tertiary education system.

This blindspot continues to act as a barrier to the creation of the responsive, integrated education and training system many are arguing is needed to sustain economic growth in a changing world.