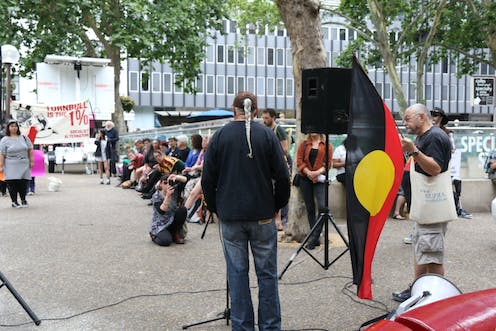 A Senate inquiry has recommended that trials of the Cashless Debit Card be continued and expanded to new sites in other states next year. This is despite Labor and Greens senators providing separate dissenting reports that rejected the recommendation that legislation for the bill should pass.

The majority report’s proposal dramatically contrasts with most of the submissions accepted by the inquiry raising significant concerns and arguing against the trials. These submissions outline a variety of serious issues that have been largely overlooked.

What is the card?

The trials for the Cashless Debit Card began in early 2016 in Ceduna, South Australia, and the East Kimberley in Western Australia.

The card quarantines 80% of social security payments received by all working-age people (between the ages of 15 and 64) in the trial sites. It attempts to restrict cash and purchases of alcohol, illegal drugs and gambling products.

The card compulsorily includes people receiving disability, parenting, carers, unemployed and youth allowance payments. People on the aged pension, on a veteran’s payment or earning a wage are not compulsorily included in the trial, but can volunteer to take part.

The trial disproportionately targets Indigenous people, despite the government claiming the card is for both Indigenous and non-Indigenous welfare recipients. This is disingenuous, given the card was first proposed as a key recommendation in mining magnate Andrew Forrest’s Review of Indigenous Training and Employment.

This recommendation followed various other forms of income management, including a program that was part of the Northern Territory Intervention in 2007.

The Intervention required the suspension of the Racial Discrimination Act to explicitly target all Indigenous people on welfare. Concerns about human rights breaches continue, and most were overlooked by the Human Rights Joint Committee’s commentary on the Cashless Debit Card bill.

The trial of the card has increased hardship in people’s lives. This is not only because of the experiment’s disorganised and ill-conceived implementation, but also due to the trial’s design.

People are being compulsory included because there is an assumption that they engage in problematic behaviours, such as the over-consumption of alcohol, gambling, or the use of illegal drugs. But this is not the reality for most people.

Being put on the card has made people’s lives harder because limiting cash restricts people’s ability to undertake day-to-day activities to help their family’s wellbeing. This includes getting second-hand goods, paying for transport, and buying gifts.

Further, 48% of participants reported that the card does not help them look after their children better. This is concerning, as recently completed research into income management programs indicates a correlation with negative impacts on children – including a reduction in birth weight and school attendance.

Getting the assumptions wrong has pushed already vulnerable people into even more vulnerable situations. Medical specialists have raised concerns with the card being used to treat addiction.

The government used both the interim and final evaluations as key evidence to justify extending the trials.

Both evaluations have been severely criticised as being methodologically and analytically flawed: from the way interviews were conducted, to having no baseline to test government claims of success, through to an over-emphasis on anecdotal improvements and discarding important issues such as the increase in crime and domestic violence.

The decision to implement the card was not a community decision that represents the regions’ diverse interests or population. And some have had more say than others.

For example, the Miriuwung Gajerrong Corporation noted that, although the:

… Department of Social Services states that the Cashless Debit Card program was co-designed with local leaders in Kununurra … in reality, only four local leaders were consulted in relation to the introduction of the [card] in Kununurra.

Consultations themselves have not been about co-design, but have been tokenistic to convince people to support the card.

In a perverse twist, the only way people can get themselves off the trial is to get a job. Yet in both Ceduna and the East Kimberley, the biggest cause of unemployment is the lack of formal, dignified and secure jobs. Linking to unemployment, some people included in the trial are also subjected to the punitive Community Development Program. This compounds poverty, as the program’s nature induces high breaching rates.

Even if a few support the card, many more have suffered material and emotional hardship. The community has been fractured through such heavy-handed intervention. And the A$25 million spent on it has demonstrated no credible evidence of sufficient benefit to justify an ongoing rollout.

That the card continues to be pursued by government exposes its dogged obsession with implementing neocolonial and punitive policy for some imagined political gain at the expense of vulnerable people.

The author would like to thank professor Jon Altman and Sarouche Razi for comments on earlier drafts.