This follows apparently egregious behaviour by some irrigators and state government regulators in New South Wales. Yet the alleged theft of water in the Murray-Darling Basin is only the tip of the iceberg when we consider the institutional problems – namely the capture of state government agencies by powerful irrigation interests.

Take NSW as an example. In 1993 the then state Department of Water Resources’ North west rivers audit found the same theft, meter-tampering and questionable government oversight exposed again by the ABC’s Four Corners investigation in July.

Only half of the targeted volume of salt has been flushed out to sea and the water supply to Broken Hill and other communities has become unreliable. Moreover, floodplain forests and wetlands of international significance continue to decline, and native fish and water bird populations have flatlined.

In fact, many values are at risk in the river system that supplies water to more than 3 million people, and covers a seventh of Australia’s landmass. It is not only a few (alleged) bad apples, it is governance of water that is broken. 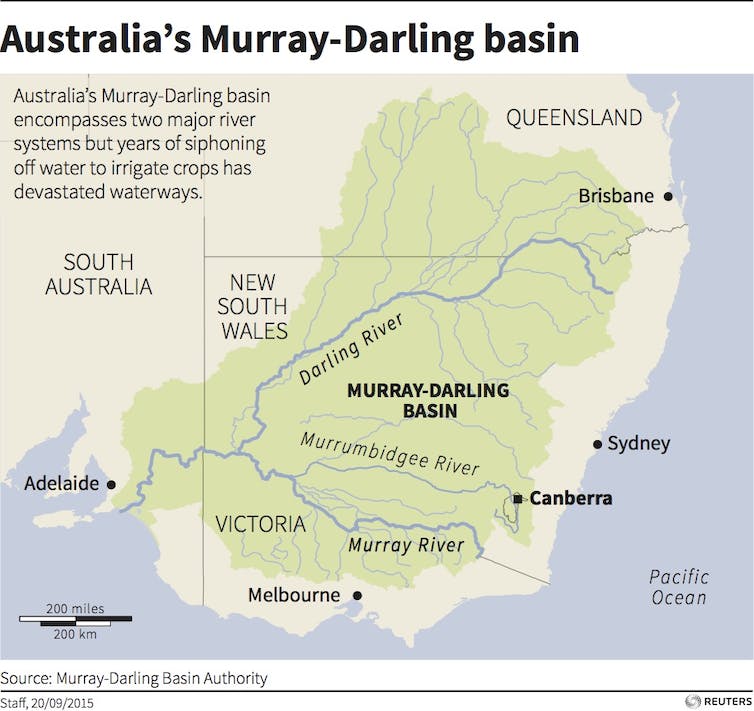 Problems with the existing plan

While bad behaviour in NSW is evident, of more concern is the way some state governments are frustrating implementation of the A$13 billion 2012-26 Basin Plan and associated programs to recover water for the river system.

If the Basin Plan is to improve the health of the river and its extensive floodplain forests along the lower River Murray, the water recovered for the environment needs to be released in pulses. That will be the best way to ensure it can rise out of the river channel and inundate wetlands.

In this context it is unhelpful for the Victorian Government to propose flows of around half the previously agreed size because of the objections of a small number of landowners along the Goulburn River in its Goulburn key focus area project.

Upstream, state governments have rules that allow water purchased by taxpayers for the river to be extracted by irrigators when it crosses state borders. However, they are failing to remove bottlenecks that prevent managed floods from travelling safely down rivers. They have even proposed to reduce the water available for the environment below minimum requirements.

Astonishingly, 30% of water extraction points in the Basin are still not metered and the information that is collected is not publicly available or audited so that theft can be penalised. 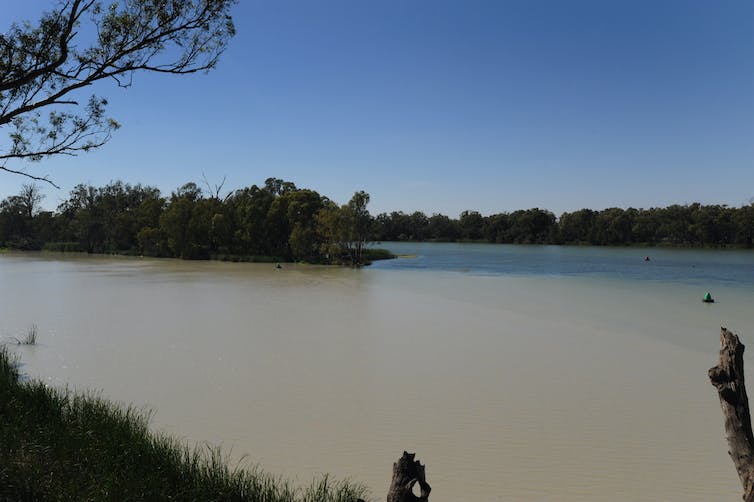 Where the Darling River meets the Murray River at the town of Wentworth. AAP

Sustainable management of the Murray-Darling Basin requires trust and cooperation among the responsible state, ACT and federal governments.

The alleged water theft in NSW breaks that trust, especially for SA as the downstream state that relies on the River Murray. But so too does the stalling of implementation of the Basin Plan agreement and manipulation of the rules that govern who gets what water and when they get it.

Read more: ‘Tax returns for water’: satellite-audited statements can save the Murray-Darling

The foundation of trust is transparency. As a start, there are many opportunities for online recording of water allocations and use to increase trust. It is still possible to fix implementation of the Plan.

In a report released yesterday the Wentworth Group of Concerned Scientists has identified several solutions, including metering all water diversions, completing water recovery, and investing in regional development.

The good news is that there are signs of political leadership. The Council of Australian Governments promised in June to deliver the Basin Plan “in full and on time” for its planned commencement in 2019.

Recently, Prime Minister Malcolm Turnbull recommitted the federal government to Basin Plan implementation. He endorsed the far-reaching recommendations of the Murray-Darling Basin Authority’s Basin-wide Compliance Review to strengthen enforcement of water laws and the Basin Plan, and to recover the remaining environmental water.

Beginning in 2018, Weatherill’s newly announced Royal Commission will investigate breaches of the Murray Darling Basin Agreement, and the Commissioner “will examine the adequacy of existing legislation and practices and make recommendations for any necessary changes.”

Most significantly, Weatherill has proposed going beyond water theft to “look into whether any legislative or policy changes since the agreement was signed in 2012 have been inconsistent with the purpose of the Basin Agreement and Basin Plan”.

Read more: We need more than just extra water to save the Murray-Darling Basin

The Royal Commission’s terms of reference are not yet available and the extent of cooperation of upstream governments is highly uncertain (NSW has already said it will not cooperate). Yet the Royal Commission could help identify ways to better meter and account for water, improve compliance and set rules to protect environmental water.

At the next Basin Ministerial Council meeting later this year the governments need to map out measures to put the Plan back on track. If it can do so, it will be endorsed at the Council of Australian Governments in 2018. This is their opportunity to articulate precisely how they will fulfil their commitment to delivering the basin plan in full and on time.

The Murray-Darling Basin Plan is not perfect. Implementation has problems, but with the remaining $5.1 billion allocated funds and proper leadership it can be well implemented to benefit both people and the environment.