The Great Barrier Reef is better able to heal itself than we previously imagined, according to new research that identifies 112 individual reefs that can help drive the entire system towards recovery.

The back-to-back bleaching events in 2016 and 2017 that killed many corals on the Great Barrier Reef have led many researchers to ask whether and how it can recover. Conventionally, we tend to focus on what controls recovery on individual reefs – for example, whether they are fouled by seaweed or sediments.

But in our study, published in PLoS Biology, my colleagues and I stepped back to view the entire Great Barrier Reef as a whole entity and ask how it can potentially repair itself.

Read more: The Great Barrier Reef can repair itself, with a little help from science

We began by asking whether some reefs are exceptionally important for kick-starting widespread recovery after damage. To do this we set three criteria.

First, we looked for reefs that are major sources of coral larvae – the ultimate source of recovery. Every year corals engage in one of nature’s greatest spectacles, their mass reproduction during a November full moon. Fertilised eggs (larvae) travel on ocean currents for days or weeks in search of a new home.

With our partners at the CSIRO we’ve been able to model where these larvae go, and therefore the “connectivity” of the reef. By using this modelling (the Great Barrier Reef is far too large to observe this directly), we looked for reefs that strongly and consistently supply larvae to many other reefs.

Healthy reefs supply far more larvae than damaged ones, so our second criterion was that reefs should have a relatively low risk of being impacted by coral bleaching. Using satellite records of sea temperature dating back to 1985, we identified reefs that have not yet experienced the kind of temperature that causes mass coral loss. That doesn’t mean these reefs will never experience bleaching, but it does mean they have a relatively good chance of surviving at least for the foreseeable future.

Our final criterion was that reefs should supply coral larvae but not pests. Here we focused on the coral-eating crown-of-thorns starfish, whose larvae also travel on ocean currents. We know that outbreaks of these starfish tend to begin north of Cairns, and from that we can predict which reefs are most likely to become infested over time.

Fortunately, many good sources of coral larvae are relatively safe from crown-of-thorns starfish, particularly those reefs that are far offshore and bathed in oceanic water from the Coral Sea rather than the currents that flow past Cairns. Indeed, the access to deep – and often cooling – ocean water helps moderate temperature extremes in these outer reefs, which also reduces the risk of bleaching in some areas.

Using these three criteria, we pinpointed 112 reefs that are likely to be important in driving reef recovery for the wider system. They represent only 3% of the reefs of the Great Barrier Reef, but are so widely connected that their larvae can reach 47% of all the reefs within a single summer spawning season.

Unfortunately, their distribution across the reef is patchy. Relatively few are in the north (see map) so this area is relatively vulnerable. 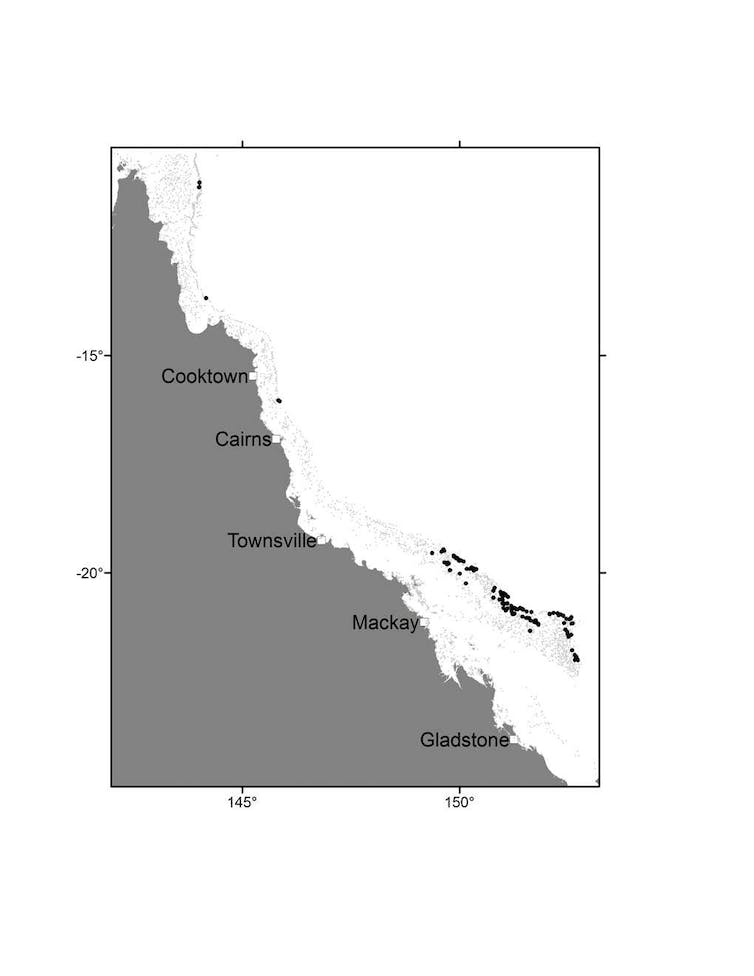 Our study shows that reefs vary hugely, both in their exposure to damage and in their ability to contribute to the recovery of corals elsewhere. Where these patterns are pretty consistent over time – as is the case for the reefs we identified – it makes sense to factor this information into management planning.

It would be sensible to improve surveillance of these particular reefs, to check that crown-of-thorns starfish do not reach them, and to eradicate the starfish if they do.

To be clear, these are not the only reefs that should be managed. The Great Barrier Reef already has more than 30% of its area under protection from fishing, and many of its other individual reefs are important for tourism, fisheries and cultural benefits.

But the point here is that some reefs are far more important for ecosystem recovery than others. Factoring these patterns into tactical management – such as how best to respond in the aftermath of a cyclone strike – is the next step. It’s a need that has been articulated repeatedly by the Great Barrier Reef Marine Park Authority.

Taking the long-term view, the greatest threats to the reef are rising sea temperatures and ocean acidification caused by elevated carbon dioxide levels. This is clearly a challenge for humanity and one that requires consistent policies across governments.

But local protection is vital in order to maintain the reef in the best state possible given the global environment. Actions include improvements to the quality of the water emerging from rivers, controlling crown-of-thorns starfish, and maintaining healthy fish populations.

This is an expensive process and resources need to be deployed as effectively as possible. Our results help target management effectively by revealing the underlying mechanisms of repair on the reef. If management can help protect and facilitate corals’ natural processes of recovery, this might go a long way towards sustaining the Great Barrier Reef in an already challenging environment.