Rising housing costs are hurting low-income Australians the most. Those at the bottom end of the income spectrum are much less likely to own their own home than in the past, are often spending more of their income on rent, and are more likely to be living a long way from where most jobs are being created.

Low-income households have always had lower home ownership rates than wealthier households, but the gap has widened in the past decade. The dream of owning a home is fast slipping away for most younger, poorer Australians.

Home ownership rates also declined more for poorer households among older age groups. Home ownership now depends on income much more than in the past. 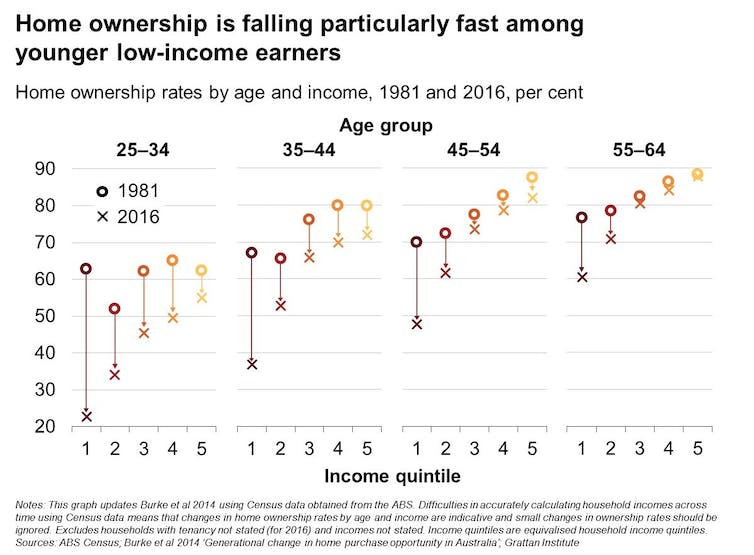 Lower home ownership rates mean more low-income households are renting, and for longer. But renting is relatively unattractive for many families. It is generally much less secure and many tenants are restrained from making their house into a home. For poorer Australians who do manage to purchase a home, many will buy on the edges of the major cities where housing is cheaper. But because jobs are becoming more concentrated in our city centres, people living on the fringe have access to fewer jobs and face longer commutes, damaging their family and social life. Prices for low-cost housing have increased the fastest The next chart shows that the price for cheaper homes has grown much faster than for more expensive homes over the past decade. This has made it much harder for low-income earners to buy a home. If we group the housing market into ten categories (deciles), we can see the price of a home in the lowest (first and second) deciles more than doubled between 2003-04 and 2015-16. By contrast, the price of a home in the fifth, sixth and seventh deciles only increased by about 70%. Tax incentives for investors may explain why the price of low-value homes increased faster. Negative gearing remains a popular investment strategy; about 1.3 million landlords reported collective losses of A$11 billion in 2014-15. Many investors prefer low-value properties because they pay less land tax as a proportion of the investment. For example, an investor who buys a Sydney property on land worth A$550,000 pays no land tax, whereas the same investor would pay about A$9,000 each year on a property on land worth A$1.1 million. Rising housing costs also hurt low-income renters As this last chart shows, more low-income households (the bottom 40% of income earners) are spending more than 30% of their income on rent (often referred to as “rental stress”), particularly in our capital cities. In comparison, only about 20% of middle-income households who rent are spending more than 30% of their income on rent. Why are more low-income renters under rental stress? First, Commonwealth Rent Assistance, which provides financial support to low-income renters, is indexed to the consumer price index and so it fell behind private market rents which rose roughly in line with wages. Secondly, rents for cheaper dwellings have grown slightly faster than rents for more expensive dwellings. Finally, the stock of social housing – currently around 400,000 dwellings – has barely grown in 20 years, while the population has increased by 33%. As a result, many low-income earners who would once have been in social housing are now in the private rental market. What can be done about it? Increasing the social housing stock would improve affordability for low-income earners. But the public subsidies required to make a real difference would be very large - roughly A$12 billion a year - to return the affordable housing stock to its historical share of all housing. In addition, the existing social housing stock is not well managed. Homes are often not allocated to people who most need them, and quality of housing is often poor. Increased financial assistance by boosting Commonwealth Rent Assistance may be a better way to help low-income renters meet their housing costs Boosting Rent Assistance for aged pensioners by A$500 a year, and A$500 a year for working-age welfare recipients would cost A$250 million and A$450 million a year respectively. Commonwealth and state governments should also act to improve housing affordability more generally. This will require policies affecting both demand and supply. Reducing demand – such as by cutting the capital gains tax discount and abolishing negative gearing – would reduce prices a little. But in the long term, boosting the supply of housing will have the biggest impact on affordability. To achieve this, state governments need to change planning rules to allow more housing to be built in inner and middle-ring suburbs. Unless governments tackle the housing affordability crisis, the poorest Australians will fall further behind.