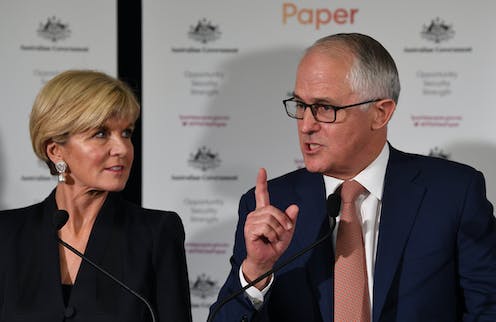 A white paper has many purposes and audiences. There are, for example, the other government departments, ministers, opposition, internal staff that have to breach the silos and understand the Grand Vision.

The 2017 Foreign Policy White Paper will be snatched up by the diplomatic community in Canberra, analysed to a hair’s breadth and cabled around the world. This white paper, after a long pause and significant uncertainty created by the presidency of Donald Trump, attracted strong domestic interest outside the usual “business and boffins” types that follow the Department of Foreign Affairs and Trade portfolio.

These disparate audiences usually mean careful phrasing. This white paper is a little different: it is certainly filled with the usual “risk…but opportunity” stock phrases, but at moments is also unusually blunt in tone and stark in its delineation of options. For example:

The Government is publishing this White Paper to chart a clear course for Australia at a time of rapid change.

It goes on to name a most significant change:

The United States has been the dominant power in our region throughout Australia’s post-Second World War history. Today, China is challenging America’s position.

Prime Minister Malcolm Turnbull addresses the Trump in the room in his foreword:

More than ever, Australia must be sovereign, not reliant. We must take responsibility for our own security and prosperity while recognising we are stronger when sharing the burden of leadership with trusted partners and friends.

But whom should we trust?

The question of what we should do is relatively clear, and uncontroversial:

The question is how we should do it. The guidance in the white paper sounds remarkably like that Australia should just keep being its awesome self - strong economy, strong borders, strong institutions (like parliament?) - and everything will turn out fine. That sounds more like wishful thinking than a foreign policy plan. Trying not to be the grass that gets trampled when elephants fight is not a plan.

The closest the white paper gets to a plan is to double-down on the US relationship, and trust that the Trump administration is a blip. Turnbull has just spent an extended period in Asia with Trump, attending the Asian Summit Season. Can he really be as confident as this document sounds?

Still, the white paper has to land somewhere, and that the US will wake up to itself soon is a defensible place to land. Acknowledging “friction” between our stronger engagement with China and our “different interests, values and political and legal systems” might be the best we can do at present.

Chapter two is probably of the most interest to the reading public - it is an excellent synthesis of all the complexity DFAT faces daily, although the climate chapter must be the rosiest version of facts possible. There is surely a top contender for understatement of the decade in the section headed “An Environment Under Strain”:

The coming decade will likely see an increased need for international disaster relief.

Generally speaking, the climate section is underwhelming. Other nations and international organisations, such as the EU Global Strategy, have underlined the strategic risk climate poses to the conduct of foreign policy in a clear-sighted and comprehensive manner.

What is also missing is the will to invest in diplomacy. What will Australia do if US global leadership conflicts with our desire for China to take a stronger role in regional security, which it must, given time?

A white paper ignites a domestic conversation about foreign policy, and this one is certainly substantive and to be welcomed. But there is little point in a Foreign Policy White Paper if it largely apes the Defence White Paper and the viewpoint of the intelligence community - as this one does. It should align, certainly, but it should also add value, the perspective gained from experienced statecraft about non-traditional security threats and relationship-building. When it comes to diplomacy, the government has to “live within its means” (bah), but defence is be described as “strong” or “substantial” no less than nine times.

What if geographic proximity to a rising Asia is not enough to ensure our own rise? What if increased defence spending doesn’t placate the US, and chokes off more creative options to integrate into the region?

There is more depth in the trade section of the paper, perhaps reflecting the increasing dominance of the trade agenda over the other parts of DFAT. The economic vision of the paper is clear - we will maintain an open economy and manage the winners and losers from this policy. “Strength through openness” is a strong narrative:

The Government will continue to work hard to ensure community support for our openness to trade, investment and skilled migration._

As a voter wading through a Queensland election at present, I can attest that the federal government has a serious job getting that narrative through to ordinary Australians. Moreover, the hard sell on trade continues with little acknowledgement that Australians outside the business community might have valid concerns about human rights or gender equality issues arising out of trade negotiations.

The promising governance innovation of MIKTA (Mexico, Indonesia, Turkey, Korea and Australia) gets a cursory mention in the document, and seems to have been restructured out of existence. The focus on Indo-Pacific is clear. This is understandable, and the ALP’s “FutureAsia” policy means this is now a welcome bipartisan focus. But Bishop’s investments in innovative pivotal power diplomacy should not be abandoned.

The “cumbersome” United Nations is treated with a level of ambiguity and grudging acceptance. Australia will run for another Security Council term in 2029. Nonetheless, there is a encouraging focus on supporting international law and the rule of law.

In a breakthrough from the previous white paper in 2003, there is a section on gender equality. It is expressed as a development issue rather than a strategic foreign policy issue, and comes at the end of a 100-page plus document. But it is still a step forward. And before the poor old Great Barrier Reef and Papua New Guinea, Timor Leste and the Pacific, all of which surely deserve deeper treatment than is offered here. But at least our neighbours score a chapter to themselves and a spot as the fifth priority.

It is worth looking at the section on “soft power” at the very end of the document, an important addition. It covers science diplomacy, sports and creative diplomacy, international education, digital engagement and people-to-people links, as well as the New Colombo Plan.

It may feel like an afterthought, but much of Australia’s way through the maze presented in the white paper may in fact stem from better investment in these areas of statecraft and a stronger nation brand in pursuit of our five new priorities.