No human has been to the Moon since 1972 and only 12 people have ever done it – all of them American men.

But that list could soon be getting a lot longer.

Why the Moon? Haven’t we already been there, done that? Well, yes. But now there are new reasons motivating countries to reach the Moon.

Read more: How old is our Moon?

Human and other missions to the Moon are planned by India, China and Russia, as well as Japan and Europe. South Korea and North Korea are also looking towards the Moon.

Even NASA seems to be getting its mojo back, recently announcing a revamped vision for a Deep Space Gateway that includes a port of call at the Moon en route to Mars and beyond. Elon Musk has also called for a Moon base.

Private companies are vying for a slice of the Moon pie, lured by Google’s multi-million dollar XPRIZE that challenges entrants to develop low-cost methods for robotic space exploration.

A space race of sorts seems to back on in earnest, for five reasons. 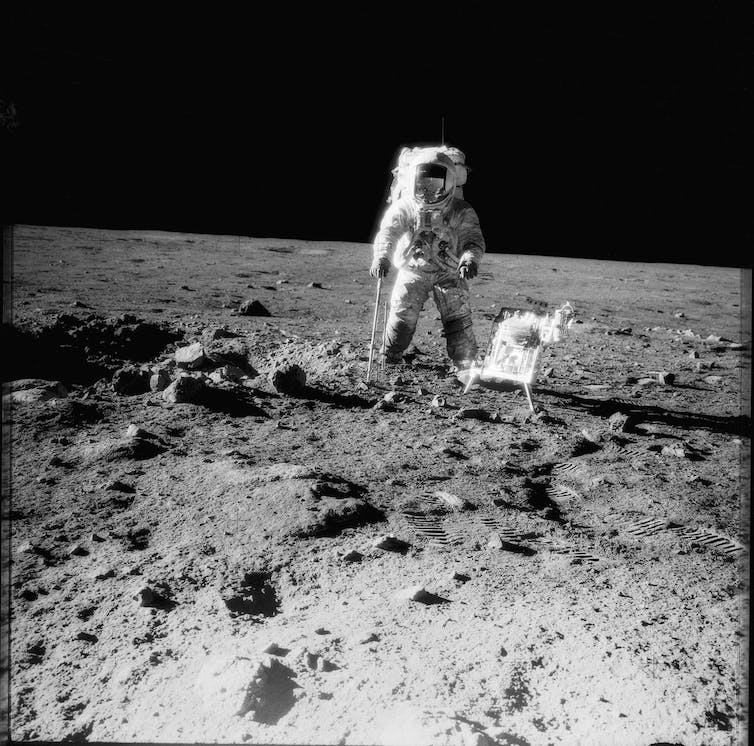 Apollo 12 crewman with tools and carrier of Apollo Lunar Hand Tools on the Moon, November 1969. NASA

Reason 1: a vision for innovation

In the past and still now, one reason that space attracts interest and investment is that humans seem driven to explore and push the limits, physically and viscerally.

But space also acts as a unifying force, providing a clear vision that pushes technology and innovation forwards.

After several decades of relative neglect, space exploration is again seen as driving technology, inspiring engagement with science and engineering, and creating national pride. The program at the recent International Astronautical Congress in Adelaide captured that sentiment.

Read more: Explainer: What is a lunar eclipse?

These motivators are seen as especially important by emerging economies like India, China and Russia, which means that more established players like Europe and the USA have to work harder keep up.

The recent announcement that Australia will have a space agency is expected to create new opportunities for this country.

Paradoxically, exploration of the Moon builds both international cooperation and competition.

Even if they don’t have their own space program, countries can develop instruments to fly on spacecraft that are built and launched by other nations. For example, India’s Chandrayaan-1 spacecraft carried instruments from Sweden, Germany, UK, Bulgaria, and the US to the Moon. This helps mesh economies and provides strong motivation to keep the peace.

Economic and geopolitical competition occurs because the Moon is seen as unclaimed territory. No country is allowed to own the Moon, at least according to a 1967 UN Treaty that has agreement from over 100 countries. 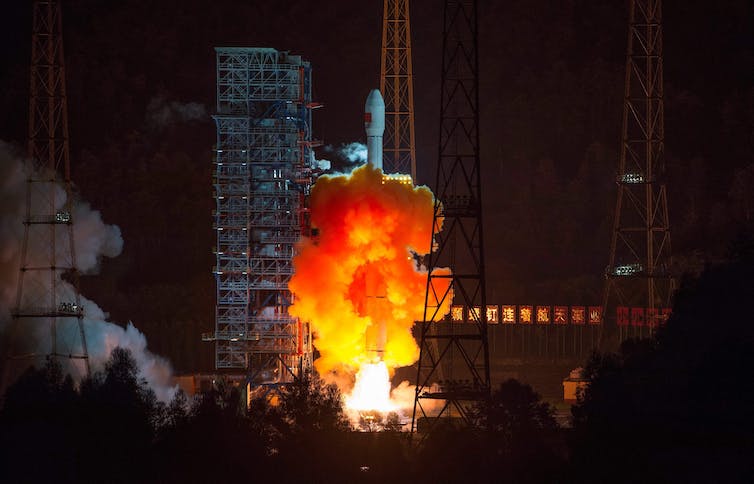 Nonetheless, there are incentives to place a claim on the Moon. For example, helium-3 (an isotope of the element helium) is abundant on the Moon, but rare on Earth. It is a potential fuel for nuclear fusion, a potentially unlimited and non-polluting source of energy. China, in particular, has stated a strong interest in lunar helium-3.

The situation appears similar to that of Antarctica in the 1950s, when the continent was subdivided by the 12 countries that had active scientific programs in the region at the time. Sending a spacecraft to the Moon – even if it fails prematurely like India’s Chandrayaan-1 – may provide a compelling case for recognition if the Moon were ever to be carved up into zones of research and economic development.

Russia, China, Japan, Europe and the USA landed (or crashed) spacecraft on the Moon in the decades after Apollo.

Growing space agencies need successful missions, and the Moon is a tempting target. Radio communication over the relatively short distance between the Earth and Moon (384,400 km) is almost instantaneous (1-2 sec). Between Earth and Mars, two-way communication times can be the better part of an hour.

The low gravity and lack of an atmosphere on the Moon also simplifies operations for orbiters and landers.

The Russian Luna missions showed that it is technically feasible to apply robotics to bring samples from the Moon to Earth. China aims to launch a robotic mission to the Moon in the next 1-2 years to fetch samples. If successful, these will be the first samples brought back from the Moon since Luna 24 in 1976.

Despite decades of observations, each new mission to the Moon produces new discoveries. 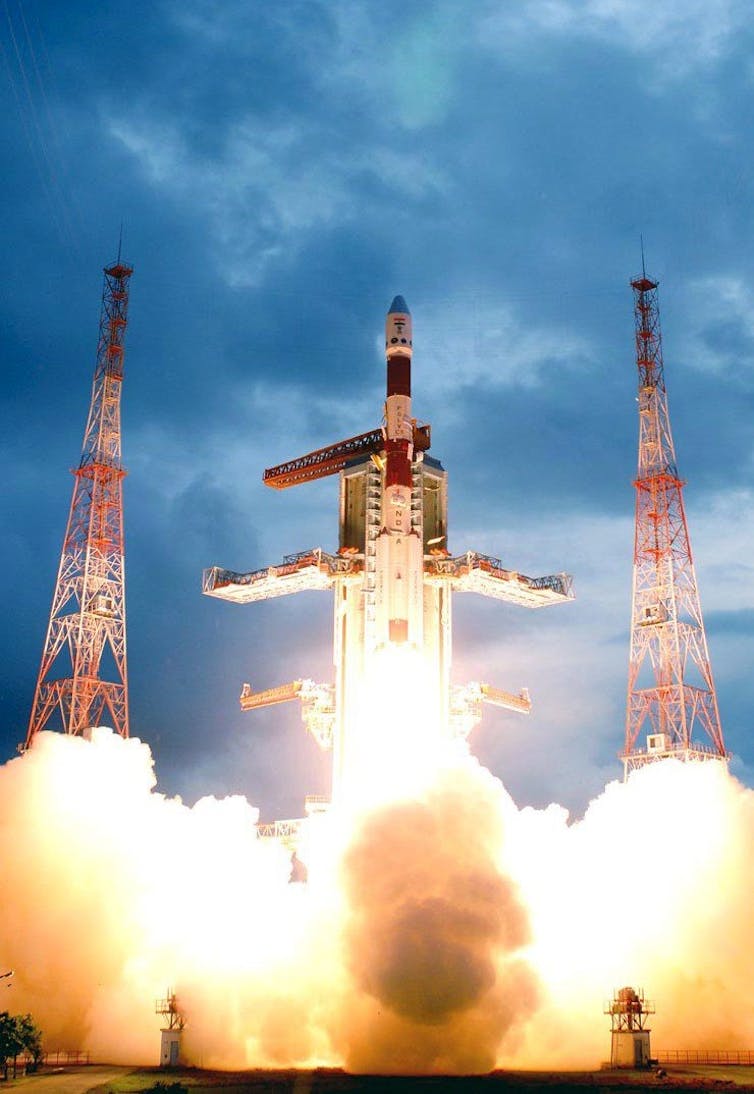 An exciting discovery has been the presence of water ice and other organic compounds in permanently shadowed regions of the Moon that never see sunlight. If present in sufficient quantities, water ice on the Moon could be used as a resource for generating fuel or supporting human habitation. This would be a major advantage for future missions considering the cost of carrying water from the Earth to the Moon.

Read more: Antarctica may hold the key to regulating mining in space

Although immense engineering advances are needed to recover these resources from environments as cold as -250℃, such challenges drive new technologies.

Reason 5: we learn about Earth

Aside from the practicalities, exploration of the Moon has revealed completely new ideas about the origin of the Solar system.

Prior to the Apollo missions, planets were thought to form over long periods of time by the slow agglomeration of dusty particles. Moon rocks returned to Earth by the Apollo missions changed that idea literally overnight. We now know that gigantic collisions between planets were common, and one such collision of a Mars-size planet with the Earth probably formed the Moon (animation).

We’ve also learned that the dark circular features on the Moon are scars of impacting asteroids stirred up by shifts in the orbits of Jupiter and Saturn.

Future studies of the Moon will undoubtedly lead to even deeper insights into the origin of the Earth, our home planet.

Space exploration is not only about “out there”. Travel to the Moon creates jobs, technical innovations and new discoveries that improve the lives of all of us “down here”.