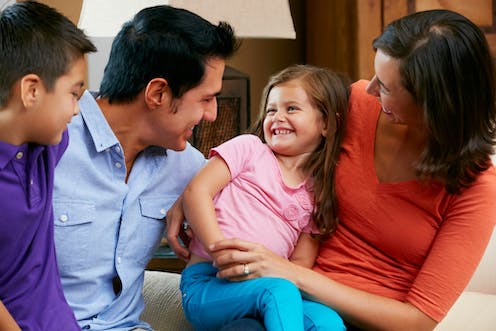 It's important to speak to your kids about the same-sex marriage debate, but how much and what will depend on their age and level of interest.Shutterstock

After three months of sometimes acrimonious debate, the results of the same-sex marriage postal survey are in: 61.6% (a majority), voted yes to legalising same-sex marriage. Nearly 13 million of...

After three months of sometimes acrimonious debate, the results of the same-sex marriage postal survey are in: 61.6% (a majority), voted yes to legalising same-sex marriage. Nearly 13 million of us (a response rate of 79.5%) returned the survey form.

The postal survey exposed significant differences of opinion, and has left many feeling bruised. So much so that there has been an increase in numbers accessing mental health services.

Many parents might now be experiencing a dilemma as to whether they need to discuss this result with their children. Although the public vote has ended, the conversation will no doubt continue. Now more than ever, it is important to talk about the issues with your children and provide honest information. In the long term, it will be the youngest members of our society who will be most affected by the outcomes of this voting process.

Children will continue to receive messages from other sources. They may overhear adult conversations, other children may talk about it, and they are unlikely to have missed the topic in the media. While it’s important to be honest with your child, try not to be pessimistic or worry them about the consequences of the result or what happens next.

Here are some things that can help make these conversations easier.

Start by having open communication and letting your child know that you are willing to answer their questions. Conversations should be brief and factual, and the level of detail you provide will depend on your child’s age and level of interest in the topic.

Whichever side you’re on, try to use correct and respectful terminology and be nonjudgmental of the opposing view.

Discourage your child from colloquial use of terms such as “gay” or “homo” to represent things that are negative or bad. Although often not purposely used to be hateful, these expressions can be quite commonplace in schools and carry negative connotations for LGBTQI+ people.

Don’t shy away from discussing the same-sex marriage postal vote with young children, especially if they have questions. Keep discussions simple and honest with younger children, and focus conversations around love and caring relationships.

To facilitate conversations, parents can introduce their child to more basic LGBTQI+ terminology such as gay and lesbian. Explain these terms simply. For example, “a lesbian is a woman who loves another woman”. In this way, the same-sex marriage vote can be explained fundamentally as deciding whether someone should be allowed to marry a person of the same sex.

Young children may have limited exposure to same-sex couples and “non-traditional” family structures, so it is important that parents help normalise all family types. Explain that some families have one mummy and one daddy, while other families might have two mummies or two daddies. Emphasise to children that regardless of how many mums and dads a family might have, what is important is that children are loved and cared for. 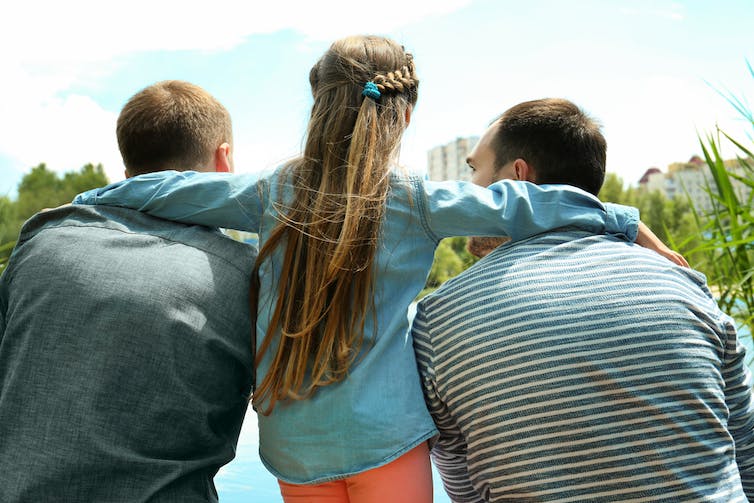 It’s important to talk to your kids about non-traditional family structures. Shutterstock

Watching the news with your older child can provide an opportunity to discuss the issues and help you understand what your child already thinks and knows. During conversations, encourage children to try to understand both sides of the debate. Do not lecture them or try to convince them your viewpoint is correct. They will likely form their own views over time.

The language used and the topics discussed with older children are more complex and diverse. For example, you may explore different perceptions of gender and sexuality (like transgender and asexual identities), and discuss issues of discrimination, diversity and inclusion. What you discuss should be framed around what your young person is curious and concerned about - let them set the agenda.

Respectful and accurate use of LGBTQI+ terminology will be particularly important for older children as they are more likely to have been exposed to defamatory LGBTQI+ language in media and at school. If LGBTQI+ terminologies are not familiar to you, this may be a good opportunity to learn and discuss these together with your adolescent. A good place to start, for example, may be understanding what each of the letters in the LGBTQI+ acronym stand for. This glossary of terms can be useful.

Adolescents likely have LGBTQI+ peers and may themselves be trying to understand their sexuality.

There are many benefits of having open, clear, factual discussions with children about relationships and sexuality from an early age. When parents talk to their children about sexuality-related issues, children are likely to feel good about themselves, their bodies and their gender. They can appreciate and accept individual differences, and understand what constitutes appropriate and inappropriate behaviour. Importantly, they can make informed and responsible sexual decisions later in life.

Parents who identify as LGBTQI+ may be facing stigma not only directed at themselves, but also at their children. Helping children to navigate stigma and respond effectively to bullying is important.

Parents may need to find ways to manage their own emotions when discussing the topic with their children. Although as a parent you will always want to put your child first, it is important during this time that you consider your own needs and look after yourself as well.

For school-age children and adolescents who identify as LGBTQI+ or whose families are LGBTQI+, the same-sex marriage postal vote can be a vulnerable time.

Schools can be challenging places for LGBTQI+ young people, and more than half of LGBTQI+ students indicate they felt unsafe at school due to their sexuality.

Parents should be aware that their child may be a target of homophobic bullying, especially as the same-sex marriage debate continues. Ask your child if they are OK and let them know you are always available should they need to talk. Be prepared to help your child respond effectively to bullying and to be an advocate for them at school.

While there is no one way to respond to bullying, headspace and the Australian Psychological Society both offer practical suggestions that parents can discuss with their children if they are being bullied:

If parents are aware their child is being bullied, it is important that they do not ignore it. Schools will have anti-bullying policies in place and parents and schools should work together to protect children against bullying.

It’s not over yet 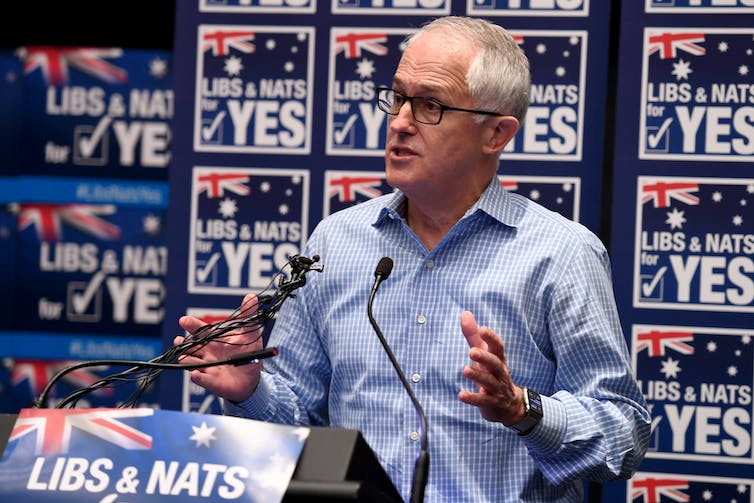 Prime Minister Malcolm Turnbull has said if there is a Yes vote, legislation will be passed by Christmas. Paul Miller/AAP

The debate is not over yet. Legislation will now be introduced in parliament, with Prime Minister Turnbull saying the government will pass legislation by Christmas. This issue will continue to be debated beyond today’s result, and these are not one-off conversations to have with your children. Your child’s needs and ability to understand the issues will change with time, so an ongoing personal conversation is important, especially as the public conversation will no doubt continue.

Where to get help

For information or support for both parents and young people, visit ReachOut or headspace. Crisis support is available from Kids helpline on 1800 55 1800 or Lifeline on 13 11 14.