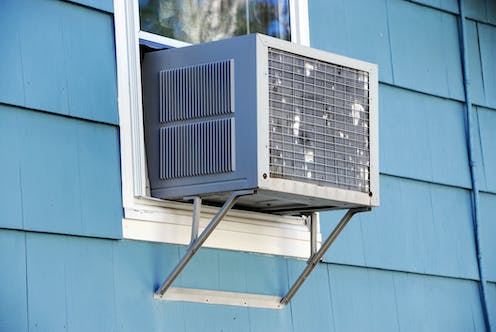 The trifecta of rising electricity prices, soaring temperatures and concerns over possible blackouts risks increasing heat-related deaths and illness this summer, as households struggle to afford to run cooling appliances.

Over the past year, our Heatwaves, Homes & Health research project has investigated the impact of electricity policy on heat-vulnerable and financially constrained households in Melbourne, Dubbo and Cairns. Many of these households live in poor quality homes that typically heat up quickly and cool down slowly.

Read more: Are heatwaves ‘worsening’ and have ‘hot days’ doubled in Australia in the last 50 years?

Our findings reveal that schemes to reduce energy demand (like raising electricity prices during heatwaves and encouraging electricity conservation to avoid blackouts) could increase health and wellbeing risks, unless they take into account housing, health and socioeconomic disadvantages.

The inequitable rise of air conditioning

About four out of five Australian households now have air conditioners. This is a rapid shift from 30 years ago, when most households used fans, cool water, and slowing down their activities on hot days. Many still use these strategies, but not necessarily by choice.

Our study investigated what households most at risk – those with older residents, infants and chronic health conditions – do to try to keep cool during heatwaves.

Seventy professionals from health and social service organisations reported their experience with vulnerable households through interviews and a survey, and 36 at-risk households were interviewed in their homes. Half of the households were renters (public and private) and 70% were on low incomes.

For low-income households, whether homeowners or renters, home improvements like effective insulation and shading were usually out of their reach. Some wanted air conditioning installed to avoid debilitating discomfort or even hospitalisation, but either could not get their landlords’ agreement, or couldn’t afford the cost.

However, having access to air conditioning was not a straightforward solution. Older households often downplayed the potential risks of heat to their health, severely restricting or avoiding use of their air conditioning out of fear of an unaffordable electricity bill.

Read more: How to keep your house cool in a heatwave.

In contrast, parents of infants tended to use their air conditioning even when the electricity bills caused financial hardship. For some households, using air conditioning meant spending less on other aspects of household well-being, such as healthy food, health care, childrens’ school needs or social activities. Some relied on community organisations to help when electricity bills were due.

Professionals who work with vulnerable households worried that electricity costs were affecting their clients’ health. The vast majority – 88% of those surveyed – reported that they knew of households with very young, old or ill members who did not use air conditioning during heatwaves, most commonly because of electricity cost. One third knew of clients who avoided using fans to reduce electricity bills.

Health authorities often advise older people and people with health conditions to visit cool public places during extreme heat. Yet our findings show that access is limited by the lack of suitable transport or suitable public spaces. Our cities and towns have few cool places which don’t charge for entry, stay open in the evening when it’s still hot, and don’t encourage spending, alcohol consumption, or gambling.

On top of that, “cost-reflective” pricing – electricity tariffs with higher costs when demand is highest (and the weather is hottest) – is being introduced in Australia. The energy sector hopes this will reduce peak demand, but this approach does not take into account vulnerable people who, although they have a legitimate health risk, may respond with unhealthy self-rationing of cooling.

The difference between air conditioning ‘needs’ and ‘wants’

Last summer featured public appeals such as “turn up your aircon to 26 degrees”, particularly as Queensland and New South Wales faced electricity shortages. This summer we will see demand-response trial programs, which incentivise households to reduce their energy at peak times.

Yet advice to conserve power during the 2014 Victorian heatwave reportedly caused some of the most vulnerable households to restrict use of air conditioners. Our study shows that a sense of responsibility to the community means some elderly people are unlikely to excuse themselves from public appeals to minimise power use, even when it puts their health at risk.

Heatwaves are predicted to become longer and more extreme. This increases the chance of a prolonged electricity outage, our health infrastructure being overwhelmed, and unnecessary loss of lives.

Managing these risks isn’t as simple as telling people to reduce their power use. Fixing the vast number of inefficient, “tinder box” Australian homes should be a priority, as well as improving access to cool public spaces.

Additionally, energy policy needs to understand vulnerability as more than a lack of income. Housing and health issues, basic access to air conditioning for the most vulnerable, and perceptions of need should all be taken into account. Efforts to manage peak demand, including pricing reforms, should not put heat-vulnerable households at greater health or financial risk.

That doesn’t mean we shouldn’t encourage people to reduce their power use. But public campaigns should acknowledge that the need for air conditioning isn’t trivial or avoidable for those most at risk.

Luckily, there is significant scope for young and healthy households, and those with well insulated, shaded and ventilated homes, to curb air conditioning use during the hot peaks. Earlier research indicates that there is considerable willingness in younger households to act for the “common good” and health of older people during heatwaves. This should be fostered for the benefit of the most vulnerable and society as a whole.