Global greenhouse emissions from fossil fuels and industry are on track to grow by 2% in 2017, reaching a new record high of 37 billion tonnes of carbon dioxide, according to the 2017 Global Carbon Budget, released today.

But this year’s figures suggest that the keenly anticipated global peak in emissions – after which greenhouse emissions would ultimately begin to decline – has yet to arrive.

The Global Carbon Budget, now in its 12th year, brings together scientists and climate data from around the world to develop the most complete picture available of global greenhouse gas emissions.

In a series of three papers, the Global Carbon Project’s 2017 report card assesses changes in Earth’s sources and sinks of CO₂, both natural and human-induced. All excess CO₂ remaining in the atmosphere leads to global warming.

We believe society is unlikely to return to the high emissions growth rates of recent decades, given continued improvements in energy efficiency and rapid growth in low-carbon energies. Nevertheless, our results are a reminder that there is no room for complacency if we are to meet the goals of the Paris Agreement, which calls for temperatures to be stabilised at “well below 2℃ above pre-industrial levels”. This requires net zero global emissions soon after 2050. 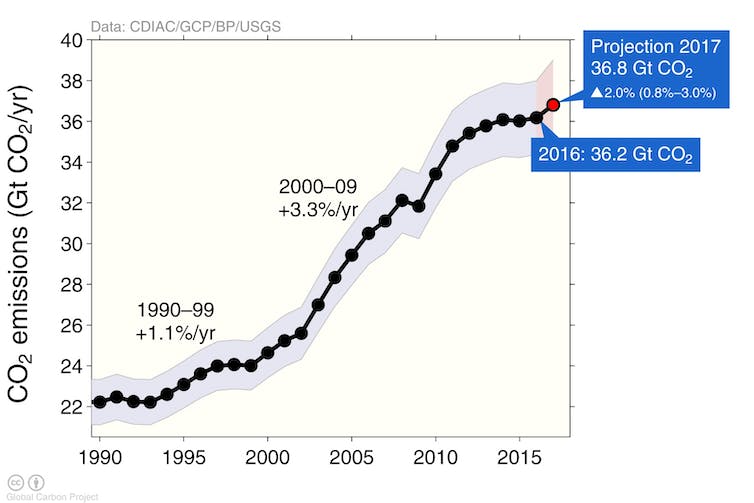 The most significant factor in the resumption of global emissions growth is the projected 3.5% increase in China’s emissions. This is the result of higher energy demand, particularly from the industrial sector, along with a decline in hydro power use because of below-average rainfall. China’s coal consumption grew by 3%, while oil (5%) and gas (12%) continued rising. The 2017 growth may result from economic stimulus from the Chinese government, and may not continue in the years ahead.

The United States and Europe, the second and third top emitters, continued their decade-long decline in emissions, but at a reduced pace in 2017.

For the US, the slowdown comes from a decline in the use of natural gas because of higher prices, with the loss of its market share taken by renewables and to a lesser extent coal. Importantly, 2017 will be the first time in five years that US coal consumption is projected to rise slightly (by about 0.5%).

The EU has now had three years (including 2017) with little or no decline in emissions, as declines in coal consumption have been offset by growth in oil and gas.

Unexpectedly, India’s CO₂ emissions will grow only about 2% this year, compared with an average 6% per year over the past decade. This reduced growth rate is likely to be short-lived, as it was linked to reduced exports, lower consumer demand, and a temporary fall in currency circulation attributable to demonetisation late in 2016. 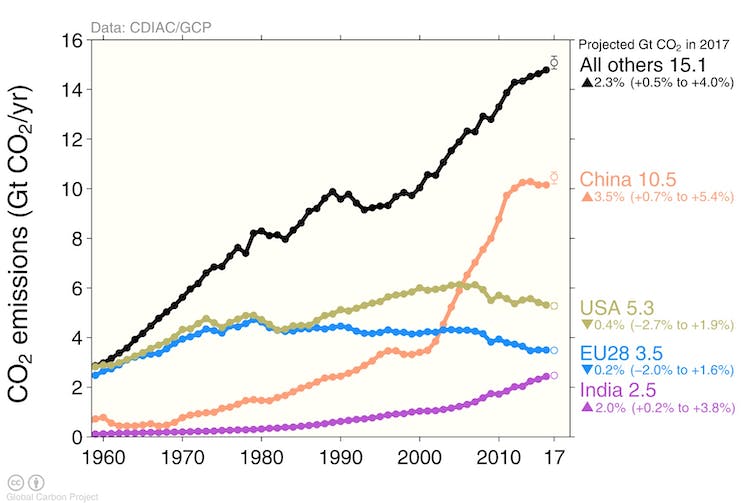 Trends for the biggest emitters, and everyone else. Global Carbon Project, Author provided

Yet despite this year’s uptick, economies are now decarbonising with a momentum that was difficult to imagine just a decade ago. There are now 22 countries, for example, for which CO₂ emissions have declined over the past decade while their economies have continued to grow.

Concerns have been raised in the past about countries simply moving their emissions outside their borders. But since 2007, the total emissions outsourced by countries with emissions targets under the Kyoto Protocol (that is, developed countries, including the US) has declined.

This suggests that the downward trends in emissions of the past decade are driven by real changes to economies and energy systems, and not just to offshoring emissions.

Other countries, such as Russia, Mexico, Japan, and Australia have shown more recent signs of slowdowns, flat growth, and somewhat volatile emissions trajectories as they pursue a range of different climate and energy policies in recent years.

Still, the pressure is on. In 101 countries, representing 50% of global CO₂ emissions, emissions increased as economies grew. Many of these countries will be pursuing economic development for years to come.

A peek into the future

During the three-year emissions “plateau” – and specifically in 2015-16 – the accumulation of CO₂ in the atmosphere grew at a record high that had not previously been observed in the half-century for which measurements exist.

It is well known that during El Niño years such as 2015-16, when global temperatures are higher, the capacity of terrestrial ecosystems to take up CO₂ (the “land sink”) diminishes, and atmospheric CO₂ growth increases as a result.

The El Niño boosted temperatures by roughly a further 0.2℃. Combined with record high levels of fossil fuel emissions, the atmospheric CO₂ concentration grew at a record rate of nearly 3 parts per million per year.

This event illustrates the sensitivity of natural systems to global warming. Although a hot El Niño might not be the same as a sustained warmer climate, it nevertheless serves as a warning of the global warming in store, and underscores the importance of continuing to monitor changes in the Earth system. 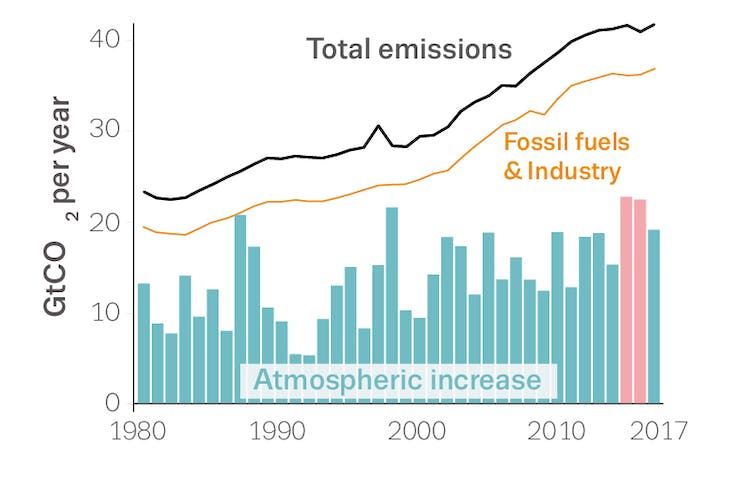 No room for complacency

There is no doubt that progress has been made in decoupling economic activity from CO₂ emissions. A number of central and northern European countries and the US have shown how it is indeed possible to grow an economy while reducing emissions.

Other positive signs from our analysis include the 14% per year growth of global renewable energy (largely solar and wind) – albeit from a low base – and the fact that global coal consumption is still below its 2014 peak.

These trends, and the resolute commitment of many countries to make the Paris Agreement a success, suggest that CO₂ emissions may not return to the high-growth rates experienced in the 2000s. However, an actual decline in global emissions might still be beyond our immediate reach, especially given projections for stronger economic growth in 2018.

To stabilise our climate at well below 2℃ of global warming, the elusive peak in global emissions needs to be reached as soon as possible, before quickly setting into motion the great decline in emissions needed to reach zero net emissions by around 2050.