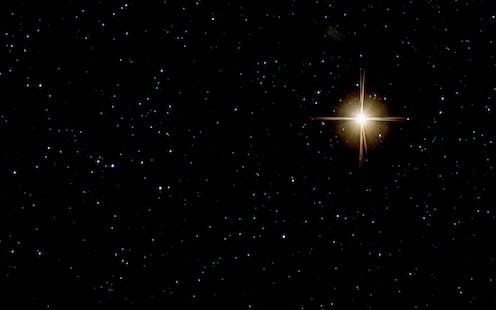 The star Betelgeuse varies in brightness.Flickr/A Tag , CC BY

Aboriginal Australians have been observing the stars for more than 65,000 years, and many of their oral traditions have been recorded since colonisation. These traditions tell of all kinds of celestial events, such as the annual rising of stars, passing comets, eclipses of the Sun and...

Aboriginal Australians have been observing the stars for more than 65,000 years, and many of their oral traditions have been recorded since colonisation. These traditions tell of all kinds of celestial events, such as the annual rising of stars, passing comets, eclipses of the Sun and Moon, auroral displays, and even meteorite impacts.

This challenges the history of astronomy and tells us that Aboriginal Australians were even more careful observers of the night sky than they have been given credit for.

What is a variable star?

The Greek philosopher Aristotle wrote in 350BCE that the stars are unchanging and invariable. This was the position held by Western science for nearly 2,000 years.

It wasn’t until 1596 that this was proved wrong, when German astronomer David Fabricius showed that the star Mira (Omicron Ceti), in the constellation of Cetus, changed in brightness over time.

In the 1830s, astronomer John Herschel observed the relative brightness of a handful of stars in the sky. Over the course of four years, he noticed that the star Betelgeuse, in Orion, was sometimes fainter and sometimes brighter than some of the other stars. His discovery paved the way for an entire field of astrophysics dedicated to studying the variable nature of stars.

But was Herschel the first to recognise this?

There is evidence that ancient Egyptians observed the variability of the star Algol (Omicron Persei).

Algol consists of two stars that orbit each other. As one moves in front of the other, it blocks the other star’s light, causing it to dim slightly. This is called an eclipsing binary. It can be seen in the sky as the winking eye of Medusa’s head in the Western constellation Perseus. 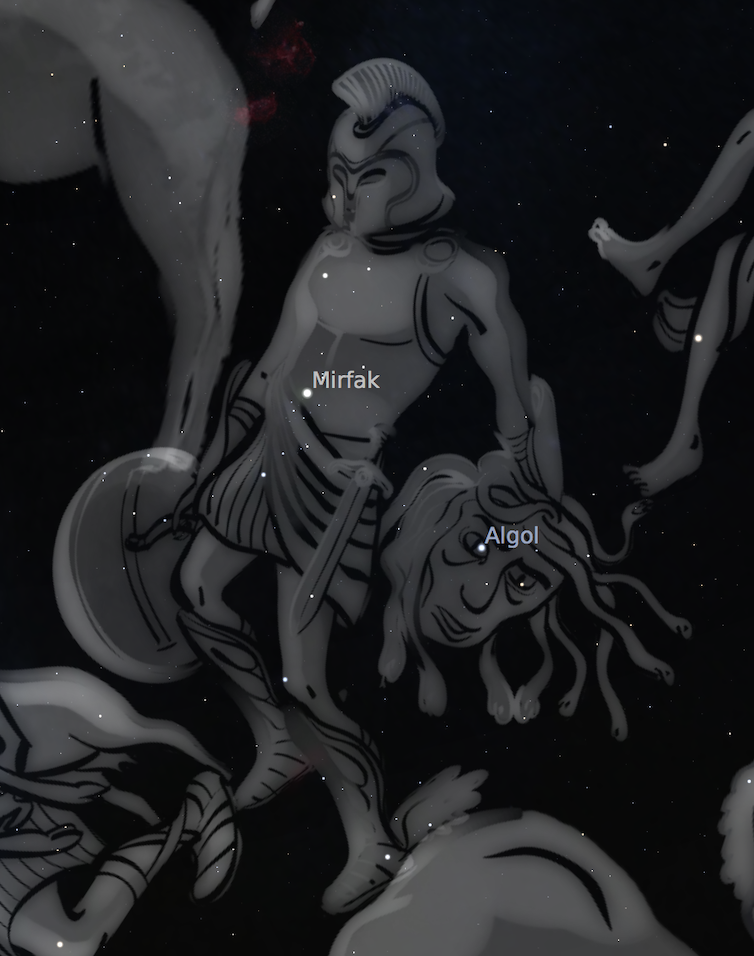 The variable star Algol is the winking eye of Medusa’s head, held by Perseus. Stellarium

Are there any clear records from oral or Indigenous cultures that demonstrate knowledge of variable stars?

A Kokatha oral tradition from the Great Victoria Desert tells of Nyeeruna, a vain hunter who comprises the same stars, in the same orientation, as the Greek Orion.

He is in love with the Yugarilya sisters of the Pleiades, but they are timid and shy away from his advances. Their eldest sister, Kambugudha (the Hyades star cluster), protects her younger sisters.

Nyreeuna creates fire-magic in his right hand (Betelgeuse) to overpower Kambugudha, so he can reach the sisters. She counters this with her own fire magic in her left foot (Aldebaran), which she uses to kick dust into Nyreeuna’s face. This humiliates Nyreeuna and his fire-magic dissipates. 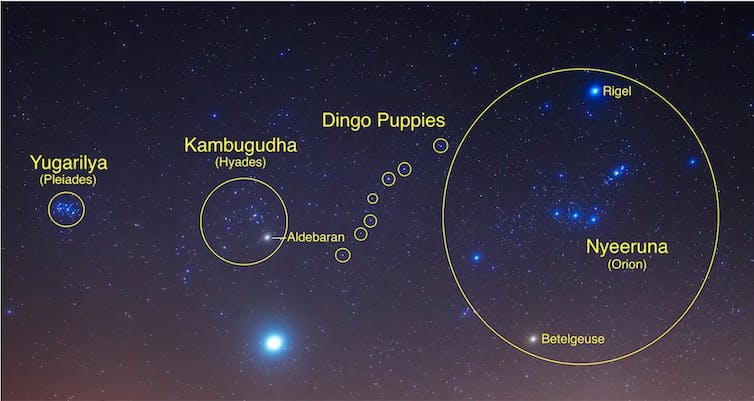 Nyreeuna (Orion), Kambugudha (the Hyades), and the Yugarilya sisters (Pleiades) with the row of dingo pups between them. Journal of Astronomical History & Heritage

Nyreeuna is persistent and replenishes his fire-magic again to get to the sisters. Kambugudha cannot generate hers in time, so she calls on Babba (the father dingo) for help. Babba fights Nyeeruna while Kambugudha and the other stars laugh at him, then places a row of dingo pups between them. This causes Nyeeruna much humiliation and his fire-magic dissipates again.

The story explains the variability of the stars Betelgeuse and Aldebaran. Trevor Leaman and I realised this in 2014, but we did not realise until now that the story also describes the relative periods of these changes.

Betelgeuse varies in brightness by one magnitude every 400 days, while Aldebaran varies by 0.2 magnitudes at irregular periods. The Aboriginal people recognised that Betelgeuse varies faster than Aldebaran, which is why they say that Kambugudha cannot generate her fire-magic in time to counter Nyreeuna.

The second oral tradition comes from the Ngarrindjeri people, south of Adelaide. The story tells of Waiyungari, a young initiate who is covered in red ochre.

He is seen by two women, who find him very attractive. That night, they seduce him, which is strictly against the law for initiates. To escape punishment, they climb into the sky where Waiyungari becomes the star Antares and the women become the stars Tau and Sigma Scorpii, who flank him on either side. 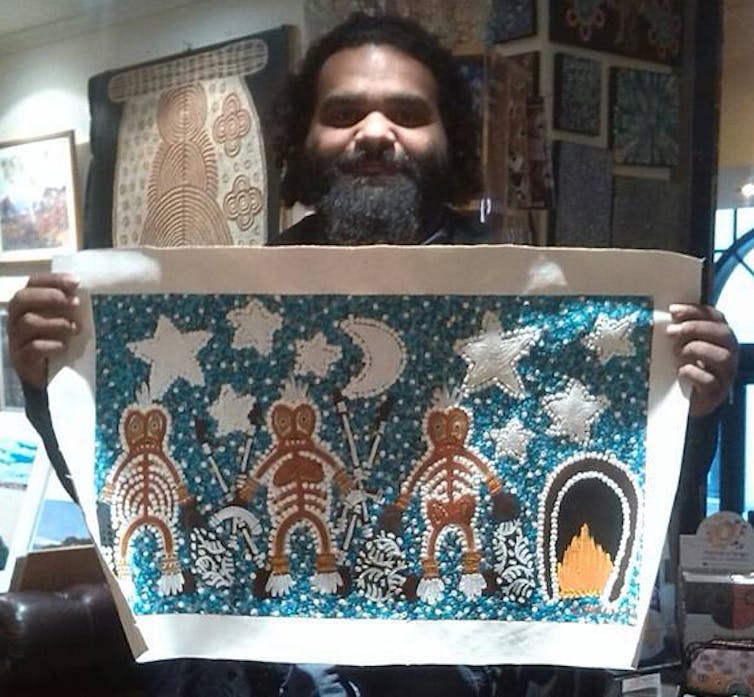 The Ngarrindjeri people say Waiyungari signals the start of Spring (Riwuri) and occasionally gets brighter and hotter, symbolising his passion for the women. It is during this time that initiates must refrain from contact with the opposite sex. Antares is a variable star, which changes brightness by 1.3 magnitudes every 4.5 years.

What does this tell us?

Ruddy celestial objects hold special significance in Aboriginal traditions - from red stars to lunar eclipses to meteors - which may be one of the reasons why these stars are so significant.

Read more: The Memory Code: how oral cultures memorise so much information

Red objects are often related to fire, blood and passion. Psychological studies show that the colour red enhances sexual attraction between people, which may explain why both stories relate to sexual desire and taboos.

The Aboriginal traditions change the discovery timeline of these variable stars, which historians of astronomy say were discovered by Western scientists.

We see that Aboriginal people pay very close attention to subtle changes in nature, and incorporate this knowledge into their traditions. Astrophysicists have much to learn if we recognise the scientific achievements of Indigenous cultures and acknowledge the immense power of oral tradition.

Duane Hamacher is giving a plenary talk on this research into Aboriginal observations of red-giant variable stars at the Australian Space Research Conference, to be held at the University of Sydney on November 15, 2017.