Over the past few years the whisky-drinking world has been introduced to several new products that claim to produce high-quality liquor in just a fraction of the time usually required to age single malt spirits. Instead of maturing the whisky for a decade or more in oak barrels, some distillers say they can replicate the quality and taste in a matter of weeks.

As global whisky consumption continues to rise, could these new ageing techniques be the answer to protecting supply? Or are the claims too good to be true? And even if the taste measures up, does that still necessarily make it the same as a fine aged malt?

Recent innovators in this field include Lost Spirits, whose prizewinning rums and single malts use a patented combination of light and heat to speed up the ageing process. Cleveland Whiskey creates whiskies and bourbons in high-pressure stainless steel tanks that mix the spirit with new wood combinations, creating unique flavours in days.

Highspire Whiskey uses wine barrels and adds oak wood chips to get a product aged in just four months. Tuthilltown Spirits, a distillery based in New York, blasts music through stereo speakers to get their barrels vibrating!

Australia’s homegrown example is Deviant Distillery based in Tasmania, which claims to have created a single malt spirit that has the “chemical composition and flavour identical to a 10-year-old whisky”. Before we test the validity of such a claim, we should review how brown liquors are made.

The basic chemistry of making spirits

Whiskies come in different variants (scotch, bourbon, rye, and so on) but are all essentially produced with just three simple ingredients: water, grain and yeast.

The most commonly used grains are barley, wheat, rye or corn. Some spirits are subject to regulations, such as Scotch whisky which must be produced from malted barley, or bourbon which must be made from at least 51% corn.

The first step is to germinate the grain in water. This releases enzymes that break down starches in the grain into sugars. This process is stopped by drying, and the “malt” (the germinated grain) is collected, before the sugars are redissolved in water. Yeast is then added to convert the sugars to alcohol. By the end of this stage, the brew contains about 8% alcohol.

The next step is distillation, where the different alcohols are separated, and the fraction that contains ethanol is collected. This process is usually repeated until this fraction contains upwards of 70% ethanol, some water, and a rich tapestry of chemicals that have been collected along the way.

Next, the distillate is transferred into charred oak barrels for ageing, where flavours such as vanilla, coconut and butterscotch are extracted into the whisky. During warm weather, increased pressure causes alcohol to move through the charred wooden pores, absorbing chemicals in the wood and filtering out impurities. When the temperature cools, the spirit moves in the reverse direction, and as this process repeats over time the liquor is slowly filtered through the barrel.

Speeding up the chemistry

You might think that speeding up the ageing process is simply a case of extracting the flavours more quickly from the oak barrels, but the chemistry is more complex than that. Chemical reactions create new molecules, many of which are credited with the properties of the longest aged whiskies.

But at the end of the day it is all just chemistry, and this brave new generation of innovators is using science to try and speed up the process. Innovative ageing vessels, coupled with clever manipulations of light and temperature, have been found to achieve authentic results in quick time.

One of the most innovative approaches currently getting some attention is through ultrasound. The underlying phenomenon driving these reactions is called acoustic cavitation - the formation, growth and collapse of microscopic bubbles under the influence of a sound field. Blasting spirits with ultrasound has been shown to speed up the ageing process of spirits and accelerate the formation of certain esters that give spirits their distinctive tastes. 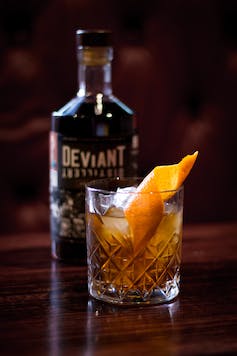 Many of the spirits that have been aged in this way cannot be sold with the names of familiar spirits, as they did not undergo the regulated minimum ageing process. For example, Deviant Distillery is not allowed to call its product whisky because it has not been aged for two years.

But how do they taste?

So the chemistry of fast liquor is effectively sound, but how does it taste? Research at the Food Safety and Measurement Facility at the University of California, Davis has mapped the “chemical fingerprint” of 60 American whiskies.

This study identified between 30 and 50 specific compounds that are responsible for differentiating the taste of one drop from another. In the case of Lost Spirits, they have published forensic data showing a favourable comparison to a 33-year old sample. More to the point, their Reactor Aged Islay Whisky recently won the coveted “Liquid Gold” standard.

Chemicals such as isopropanol react with fatty acids to form ester molecules, which impart many of the classic whisky flavours. By using ultrasonic waves or other ways of inputting energy, these ester-forming reactions can potentially yield unique flavours that are different from those of conventionally aged spirits.

So should we give these fast liquors a go? After all, are they not just alcohol and water with a handful of trace flavour molecules? Provided we can strike the special balance between dreamy romantic whiskies while hastening the ageing process, these technologies might just help us rethink and reinvent a whole new spectrum of flavours and experiences.