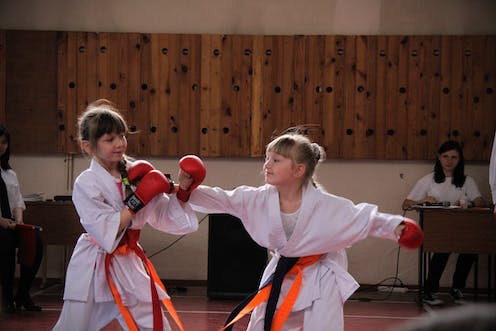 Did you fight with a brother or sister when you were little? Do you still?

According to Rob Brooks, professor of evolutionary ecology at UNSW, sibling competition has played a more important role in human evolution than many of us realise.

“Siblings compete with one another for the love and affection of their parents but even more importantly for the investment of their parents. And that’s been a really big force in the evolution of our species,” he says in the latest episode of Trust Me, I’m An Expert, a podcast from The Conversation about the most fascinating stories from Australia’s academic experts.

Our November episode is all about research on competition, including the often fierce rivalry between siblings.

“There’s the notion that if that other child gets something that I don’t get or gets to it first – even if it’s the Weet-Bix packet and there are more than enough Weet-Bix in there – then I am going to be denied,” Brooks says on the podcast.

“I think we have deep psychological affinity for this knowledge.”

In the same episode, Victoria University sports historian Rob Hess discusses some of the long forgotten categories of the Olympic Games and its precursor the Wenlock Olympian Games – including penny-farthing races and even a town planning competition.

And we hear from Seng Loke, a professor in computing science at Deakin University about how driverless cars may one day end up colluding with each other and competing against rival cars.

Trust Me, I’m An Expert is out at the start of every month. Find us and subscribe in iTunes, Pocket Casts or wherever you get your podcasts.

You can read more about what the podcast is all about here, and find our previous episodes here.

And if you like Trust Me, you’ll love The Anthill, a podcast from our colleagues at The Conversation UK that draws out the best stories and brightest minds from the UK academic community.

Their latest episode is all about the 1917 Russian Revolution, with stories from historians, music experts and even descendants of key players in the story.

Music in Episode 2 of Trust Me, I’m An Expert:

Survivor: Eye of the Tiger

BBC broadcasts of the 2012 London Olympics and the 1936 Berlin Olympics.