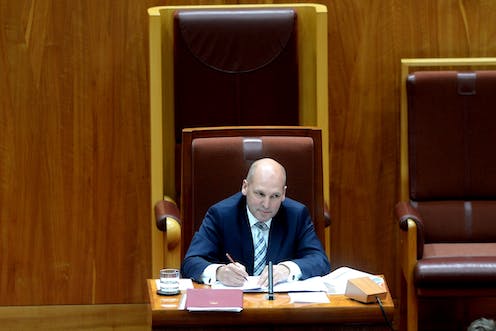 Senate President Stephen Parry has announced he will resign immediately from parliament after the UK government advised that he was a British citizen.

Confirming the latest blow to the Turnbull government, Parry said he was quitting now that the court’s Friday ruling had “given absolute clarity to the meaning and application of Section 44(1)” of the Constitution.

Parry’s British citizenship is via his late father who came to Australia as a child. He only checked out his situation with British authorities after the court ruling, indicating publicly on Tuesday that he was awaiting information.

Parry’s departure is feeding into the current’s tensions between the Nationals and the Liberals, with New South Wales National John “Wacka” Williams putting up his hand for the position of Senate president.

The post has never been held by a member of the Nationals or its predecessor, the Country Party – and the Liberals will want to keep it in their own hands.

Queensland Liberal Ian Macdonald said he would be speaking to colleagues about whether he should put up his hand. “I’d be happy to serve if my colleagues thought it was a good idea”.

The government puts up a nominee who is then voted on by the Senate. The Liberal candidate is routinely chosen by Liberal senators but there might be pressure this time to include the Nationals in the decision.

Williams, the Nationals’ whip in the Senate, is a deputy president and so used to occupying the Senate chair. “I’d like to see more discipline in the chamber, especially at Question Time,” he said on Wednesday.

Williams pointed out he has only 20 months left in parliament – he will retire at the end of this term. “For 20 months it would be good if the Liberal Party supported the National Party to do the job.”

The acting parliamentary leader of the Nationals, senator Nigel Scullion, said that “Wacka would make a great president for the Senate”.

But Liberal senator Eric Abetz said: “This is a Liberal Party position, it always has been and always will be.”

Barnaby Joyce, who is campaigning to get back into Parliament after being disqualified by the High Court, is being cautious. His spokesman said that Joyce “always supported the right of any National MP to put up their hand for a position”.

There was tension between the Coalition partners last week when Malcolm Turnbull made deputy Liberal leader Julie Bishop acting prime minister while he is overseas, rather than Scullion.

Parry is set to be replaced as a Tasmanian senator on a countback by Richard Colbeck, a former minister who was next on the Liberal ticket, although the process will have to be formally decided by the High Court.

Calls continue to come for a full audit of the citizenship of MPs, including from Liberals such as Craig Kelly, but this is being resisted by both the government and the opposition.

In his resignation statement Parry appealed to senators not to further burden by too many references an overloaded Senate committee system. “There are only so many hours that a senator can apply to this work. It is important that the fine reputation of our Senate committees continues to be well regarded here and internationally.”

Cabinet minister Mathias Cormann, who is deputy Senate leader, has turned sharply on Parry for waiting so long to declare his situation, criticising his delay in interviews on Wednesday night on both the ABC and Sky.

“Senator Parry should have acted sooner – there is no question about that”, Cormann said.

His comment contrasted with the benign line from Attorney-General Goerge Brandis, who said the circumstances that led to Parry’s “unexpected departure were not of his making. He responded to the decision of the High Court swiftly and properly”.

Cormann continued to resist the mounting calls for an audit of all MPs, arguing the matter went to the separation of powers. “There is only one authority that can conclusively resolve these questions,” he said, and that was the High Court.

“Our democracy is based on the very important principle of the separation of power between the executive, the parliament and the judiciary. The executive would be conflicted when it comes to assessing the individual members of parliament,” he said.

Cormann said there was a process available now for the eligibility of members of parliament to be challenged before the High Court. An ad hoc process would not lead to a conclusive resolution – only the court could deliver that.

In relation to Parry’s replacement, Brandis said the appropriate course was for the Senate to refer the matter to the court for orders to be made. “In the absence of any evident factual or legal dispute about Stephen’s ineligibility, I do not anticipate any delay in the making of the usual order for a special count of the Senate ballot papers for the state of Tasmania.”