Native species are particularly vulnerable on islands, because when invaders such as rats arrive, the native species have nowhere else to go and may lack the ability to fend them off.

The main characteristic of an island is its isolation. Whether just off the coast or hundreds of kilometres from the nearest land, they stand on their own. Because of their isolation, islands generally have a unique array of plant and animal species, many of which are found nowhere else. And that makes all islands one of a kind.

However, islands, despite being geographically isolated, are now part of a network. They are globally connected to the outside world by planes, boats and people. Their isolation has been breached, offering a pathway for introduced species to invade.

More than 70% of these species have arrived since the 1970s – when Galapagos first became a tourist destination – an average of 27 introduced species per year for the past 40 years.

Introduced species – plants or animals that have been artificially brought to a new location, often by humans – can damage native fauna and flora. They are among the top threats to biodiversity worldwide, and one of the most important threats to oceanic islands. The Convention on Biological Diversity has a dedicated target to help deal with them and their means of arrival. The target states that:

by 2020, invasive alien species and pathways are identified and prioritised, priority species are controlled or eradicated and measures are in place to manage pathways to prevent their introduction and establishment.

The Galapagos Islands are home to giant tortoises, flightless cormorants, and the iconic Darwin’s finches – species that have evolved in isolation and according to the differing characteristics of each of the islands. 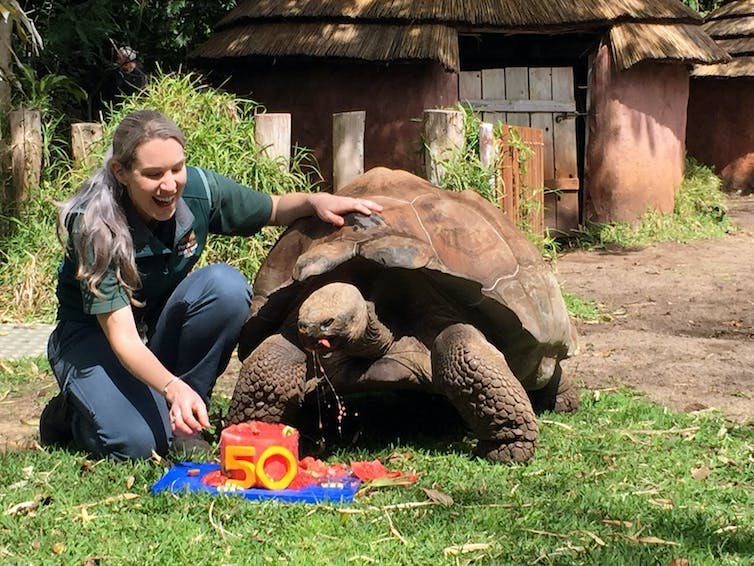 The Galapagos is home to many famous animals, including the Galapagos giant tortoise. Perth Zoo/AAP

However, the Galapagos’ natural attributes have also made these islands a top tourist destination. Ironically enough, this threatens the survival of many of the species that make this place so unique.

Humans on the rise

In 1950 the Galapagos Islands had just 1,346 residents, and no tourists. In 2015 more than 220,000 visitors travelled to the islands. These tourists, along with the 25,000 local residents, need to have most of their food and other goods shipped from mainland Ecuador.

These strengthening links between Galapagos and the mainland have opened up pathways for the arrival and spread of introduced species to the archipelago, and between its various islands. 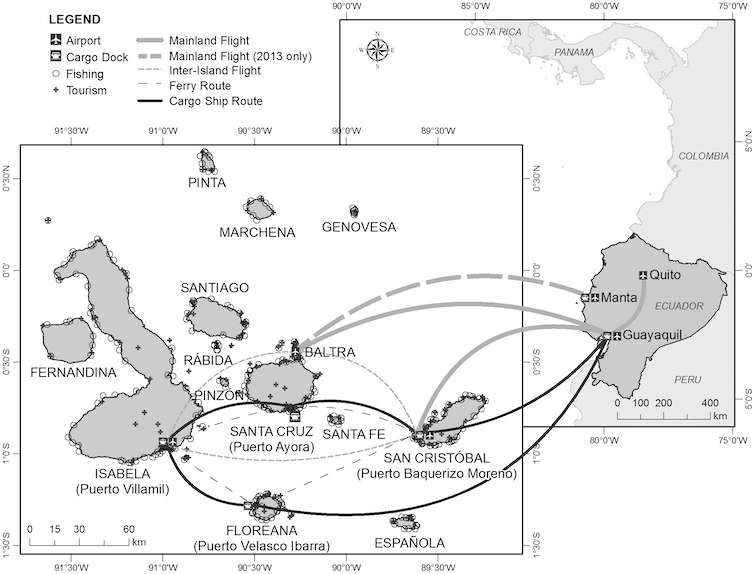 Major species transport routes into and between the Galapagos Islands. PLoS ONE 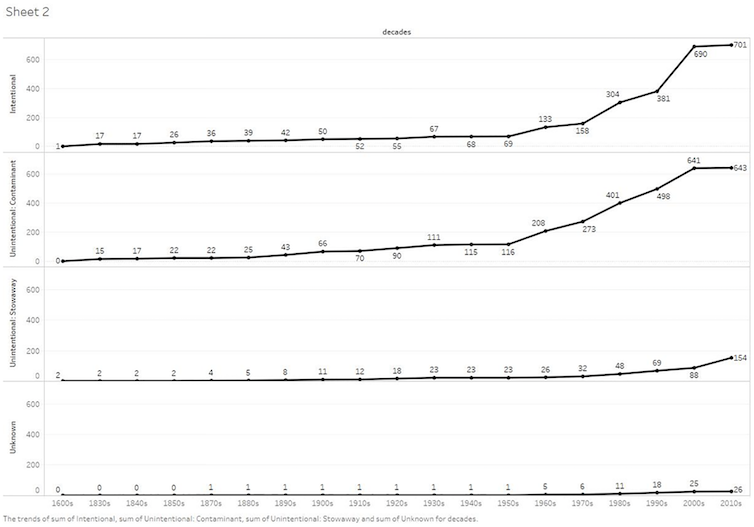 More and more alien species are finding their way to the Galapagos Islands. PLoS ONE

Plants were the most common type of introduced species, followed by insects. The most common pathway for species introduction unintentionally was as a contaminant on plants. A few vertebrates have also been recorded as stowaways in transport vehicles, including snakes and opossums; whilst others have been deliberately introduced in the last decade (such as Tilapia, dog breeds and goldfishes). 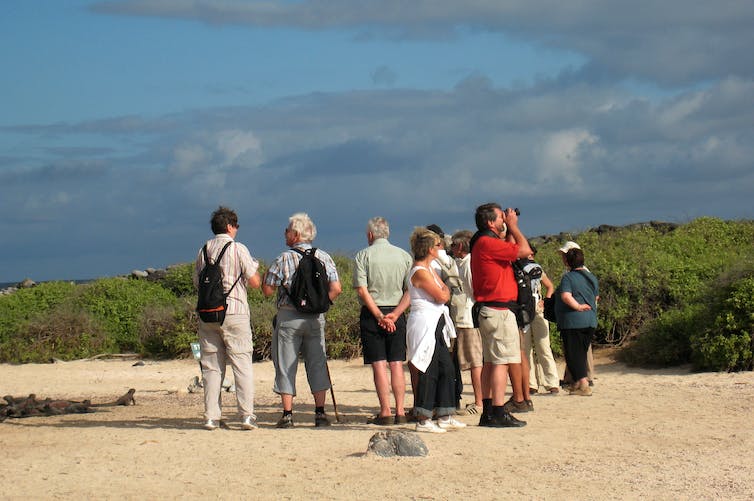 The natural appeal of the Galapagos Islands makes it a popular tourist spot. But tourists bring along introduced species, intentionally or accdientally. Suree Pritchard/AAP

The number, frequency and geographic origin of alien invasion pathways to Galapagos have increased through time. Our research shows a tight relationship between the number of pathways and the ongoing increase in human population in Galapagos, from both residents and tourists.

For instance, the number of flights has increased from 74 flights a week in 2010 to 107 in 2015; the number of airplane passengers has also increased through time with about 40% being tourists, the remainder being Galapagos residents or transient workers.

Global connections between Galapagos and the outside world have also increased, receiving visitors from 93 countries in 2010 to 158 in 2014. In 2015 and 2016, the Galapagos Biosecurity Agency intercepted more than 14,000 banned items, almost 70% of which were brought in by tourists. 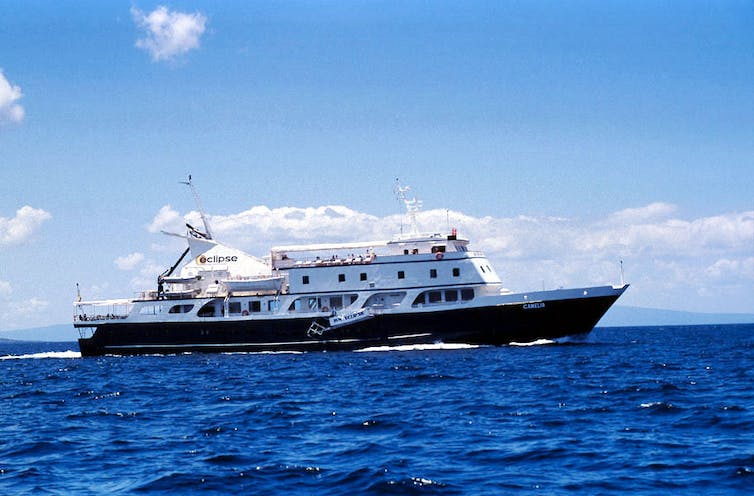 Understanding how local tourism works to connect isolated islands is key to minimising the spread of invasive species. Tempo Holidays/AAP

If islands are to be kept as islands, isolated in the full sense of the word, it is of high priority to manage their invasion pathways. Our research aims to provide technical input to local decision makers, managers and conservation bodies working in Galapagos in order to minimise a further increase on the number of available pathways to Galapagos and the probable likelihood of new arrivals. Our next step is to evaluate how local tourism boats are connecting the once isolated islands within Galapagos, as a way to minimise further spread of harmful introduced species to this UNESCO World Heritage Site.