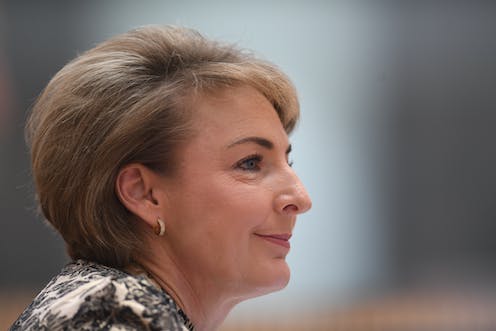 The federal opposition is continuing to call for Employment Minister Michaelia Cash’s resignation, claiming she misled parliament this week after repeatedly telling a Senate estimates committee that neither she nor her office had any involvement in tipping off the media about a police raid.

Cash’s senior media adviser, David De Garis, later confessed he had leaked information about the raid on the Australian Workers Union’s offices to the press. Cash retracted her statements and De Garis resigned.

Labor frontbencher Tony Burke argued that “the wrong person has resigned”. But Cash has refused to resign, claiming she was unaware of her staffer’s actions. Prime Minister Malcolm Turnbull has defended Cash, saying she acted properly.

Who are these advisers?

Ministerial advisers are partisan staff who are personally appointed by ministers and work out of the ministers’ private offices.

The question is what happens if advisers overstep their roles?

According to the doctrine of ministerial responsibility, ministers are responsible to parliament for the acts of their departments.

British academic Sir Ivor Jennings wrote that the “act of every civil servant is by convention regarded as the act of the minister”. And British MP Lord Morrison proclaimed that the “minister is responsible for every stamp stuck on an envelope”.

But it is doubtful that this principle has ever reflected reality. It is rare for ministers to resign or even accept responsibility for the actions of their department, where they were not personally involved.

Ministers should also technically take responsibility for the actions of advisers in their own offices, who are at an even higher level of direct ministerial control than departments.

Even more than public servants, advisers are seen to be acting as alter egos of their ministers. This means ministers should be accountable to parliament for the actions of their advisers – even those they did not authorise.

But what happens in reality is that ministers tend to use their advisers as scapegoats and blame them for controversial events. This is consistent with “public choice” theory, which predicts that politicians have the incentive to deflect all the blame that comes in their direction while accepting the credit for anything that goes right.

How are advisers regulated?

Australia has inadequate legal and political regulation of ministerial advisers. They are subject to a Statement of Standards, which sets out the standards they are supposed to meet in preforming their duties.

Sanctions under the standards are handled internally within the executive through the Prime Minister’s Office. This means any breaches of the standards by ministerial advisers would be handled behind closed doors, without the scrutiny of parliament or any external bodies.

Australia thus has minimal legal and political regulation of ministerial advisers. This has led to an accountability deficit, where ministers have been able to utilise their advisers to escape responsibility for public controversies and scandals.

How can we fix the system?

Other Westminster jurisdictions have more stringent regulation of political advisers.

Second, regulations can restrict the actions of advisers themselves. For example, in the UK, there is a prohibition on advisers leaking confidential or sensitive information, which would have been applicable in this scandal.

Canada has post-employment restrictions banning advisers from becoming lobbyists for five years after ceasing their employment.

Third, transparency measures also exist, such as requirements that departments disclose all meetings that advisers have with the media (as in the UK) and what hospitality these advisers receive (in the UK and Canada).

Ideally, the Australian regulatory framework should be reformed so it is policed externally from the core executive. In Canada, the conflict of interest and lobbying provisions are policed by the Conflict of Interest and Ethics Commissioner, who has been independent and ready to criticise the government.

In the last 40 years, ministerial advisers have become an integral part of Australia’s system of government. But the law and rules have lagged behind, and our system should be reformed to ensure greater accountability.