Thursday August 17 this year started out as an ordinary day but our lives would be transformed into a frantic world of agony and ecstasy, bordering on madness.

It all began with an email alert from LIGO, the Laser Interferometer...

Thursday August 17 this year started out as an ordinary day but our lives would be transformed into a frantic world of agony and ecstasy, bordering on madness.

It all began with an email alert from LIGO, the Laser Interferometer Gravitational-Wave Observatory.

A quick check of my emails before bed. A gamma ray burst (GRB) detected by NASA. I was tasked by LIGO to do a routine check that LIGO was operating properly at the time of the GRB. So far nothing unusual.

This time there was an accompanying email – now that’s unusual. It read “[…] this burst is coincident with a binary neutron star merger”.

I read the email several times: in shock, then after a long pause, I shouted “Holy cow!!!” “Everything okay?” asked my wife Shirley. “Not sure – something just happened,” I replied. “I think I’m in for a late night.”

At the same time, in the United States, LIGO scientists were putting together an alert to be sent to astronomers across the globe for an urgent search for an optical counterpart to the neutron star merger and GRB.

I first realised that something extraordinary had occurred when Eric sent me a text message, when I was travelling to France: “Dave, don’t know if you have landed, but I just got an advocate job […] a Fermi GRB with a really loud binary NS trigger - how amazing is that!!”

The NASA Fermi satellite had detected a GRB several seconds after the gravitational waves from the neutron star collision were detected by LIGO. This was not a chance coincidence.

We’d been planning for this

It was ironic that the trip to France was an Australian Academy of Science visit to plan for imaging a possible optical glow from a neutron star merger using the University Western Australia’s Zadko Telescope, located near Perth, for the following year.

Even in one year’s time, when LIGO would be more sensitive, predictions for capturing the light from such an event were a long shot at best.

A kilonova is a term describing the prediction that a binary neutron star merger could produce a faint optical glow from nuclear reactions occurring from the collision debris. Heavy metals are formed during this process, including gold.

So when we received a LIGO alert for optical and radio telescope follow-up of the event, it was game on!

The search is on

We were immediately bombarded by emails from colleagues at OzGrav (ARC Centre of Excellence for Gravitational Wave Discovery) at Swinburne University, including coordinates of some likely galaxies where the merger occurred.

Within 24 hours of the first LIGO alert, we were notified of an urgent message from astronomers in Chile that an unidentified optical source was pinpointed in the galaxy NGC 4993.

Now we had an exact position in the sky to image the event. For the first time a gravitational wave source had been exactly localised in the sky and connected to another galaxy.

After having invested ten years of research into the synergy between GRBs and gravitational waves, we both knew how rare, special and historic this events was.

The sky position was in our bit of southern sky, in the constellation Hydra. All focus quickly moved from gravitational waves and gamma ray bursts, to the optical realm: the Zadko telescope was primed and ready to hit any target, or so we thought.

But we hit a snag. The Zadko telescope’s computers were down because of a cyber attack. That meant no images (data) from the first night (WA time) after the alert sent by LIGO was received.

After a monumental effort from UWA technical staff Andrew Burrell, and Romain based in France, the cyber attack was eventually thwarted after 48 hrs. The robotic system was stable and back online, but were we too late to obtain any useful data?

Despite severe bad weather conditions, the first Zadko images were obtained day 2 after the event. At first it was not possible to identify any source in the image at the location of the event.

Read more: After the alert: radio ‘eyes’ hunt the source of the gravitational waves

But our colleagues at Swinburne and in France stressed that the light from the host galaxy was obscuring the afterglow. After some careful image analysis, the glow of an uncatalogued source appeared. We got it. 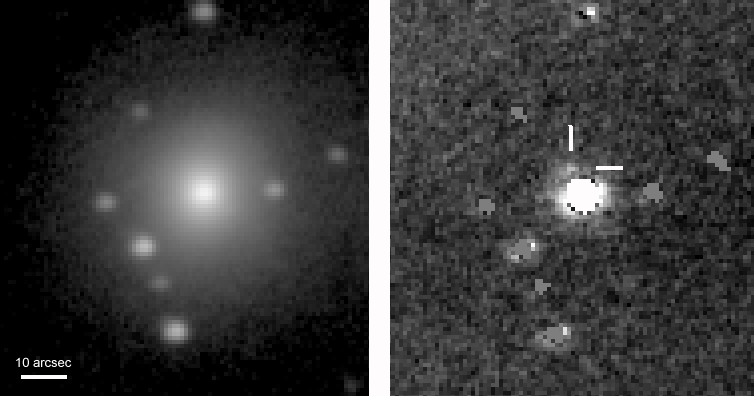 Left: Zadko image of the host galaxy named NGC 4993 obtained several days after the neutron star merger. Right: after subtracting the glow from the galaxy, an optical source is visible just above the galaxy (cross hairs). Richard Tonello, Author provided

Due its location in the sky, the afterglow was only visible from Perth for a few hours at night. We prioritised the Zadko system to image the event every night until it became too faint.

The international Zadko team acquired four days of high quality optical data. We had obtained precious data describing the optical evolution of a kilonova explosion. A detailed record of the Zadko, along with other OzGrav data, is presented in a paper published today in The Publications of the Astronomical Society of Australia.

In 2018 a more sensitive LIGO/Virgo network will start a one-year observation run at higher sensitivity, corresponding to a greater astrophysical detection range. We should expect many more roller-coaster rides during this new era of multi-messenger astronomy. Hold on to your hats!