Australia’s tallest building is currently the Gold Coast’s Q1, at 322.5 metres (including the spire).

But the 78-floor largely residential tower is set to be challenged by taller buildings planned in Melbourne and the Gold coast.

And Australia’s tall buildings are still relatively small when compared to giants overseas, such as Dubai’s 828m, 163-floor Burj Khalifa, and the 1km tall Jeddah Tower planned for Saudi Arabia.

Read more: Google architecture and what do you see? And what’s a building without people?

So if the right environmental conditions exist, is there an upper limit to building tall? Actually, our planning should include safety considerations, not just engineering capability. 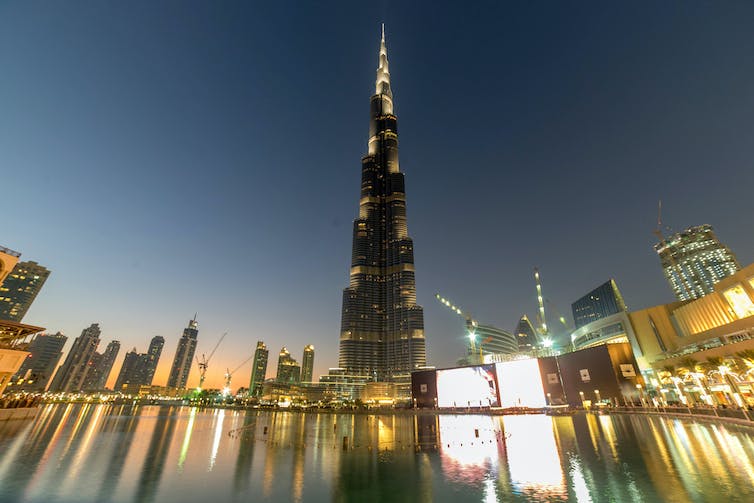 The concept of a mile-high skyscraper was first touted by the American architect Frank Lloyd Wright in 1956.

Wright proposed a 548-storey tapering form more than four times the height of the Empire State Building in New York.

While Wright’s vision was an ideal, a historical review of tall buildings reveals a more steady, incremental approach to innovation. At various points in time, different technologies have been both the enabler and then limiter of building taller.

Technical challenges grow, technology evolves to meet the needs, reaches its limits, and the cycle begins again. The structural engineer Richard Tomasetti noted in 2013’s The Tall Buildings Reference Book that “limitations are best perceived as a function of time”. This suggests that, over time, structural engineering can match any desired height given the right innovations. 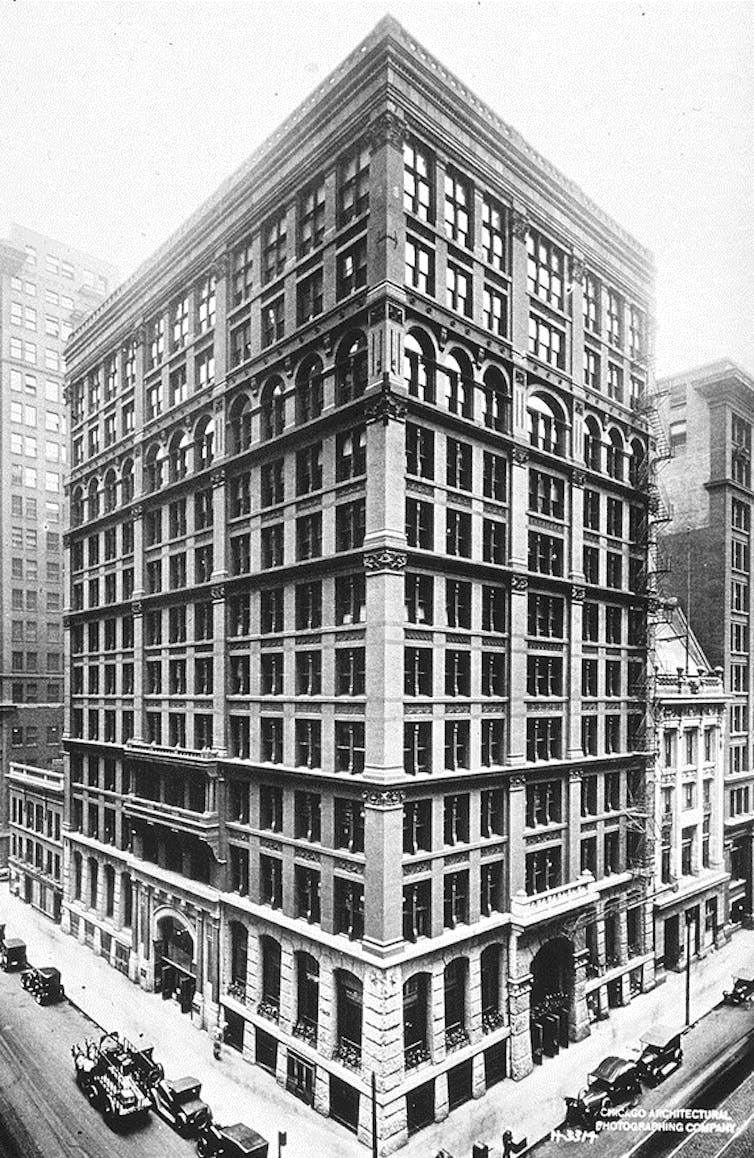 The 10-storey Home Insurance Building, built in Chicago 1885 is often regarded as the first skyscraper. It was demolished in 1931. Wikimedia

The first tall office buildings, made from load-bearing stone walls, appeared in Chicago and New York in the late 1800s. They were a response to the demands of a thriving economy and pressures on land and commercial floor space. 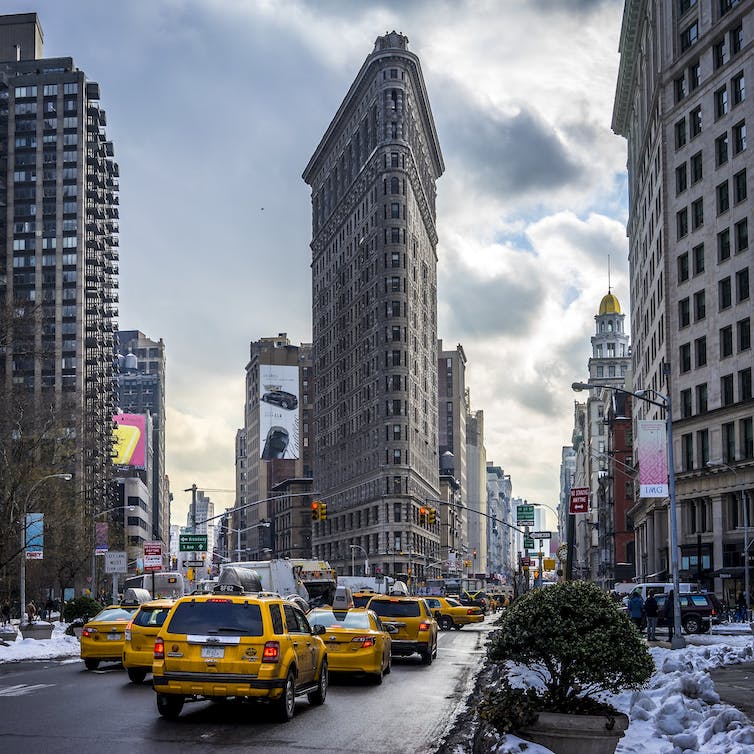 The development of framed structural systems – first in cast iron such as New York’s famous Flatiron building (above), then steel, then hybrid concrete and steel systems – revolutionised tall buildings.

The Bank of Manhattan Trust building (now Trump Tower), which was once the world’s tallest building.

New innovations such as fire resistance, electric lighting, bathrooms and steam-powered radiators provided levels of comfort and safety that were unimaginable in older buildings.

One particular invention that enabled building height was the elevator. Before its adoption, there was a diminishing rental return on the highest floors, which had to be reached by foot.

By making the upper stories more easily accessible, the elevator flipped the business model and the pursuit of height became an economic driver. Higher floors were marketed as healthier, quieter, more prestigious - and much more expensive.

Elevators inside and outside a building made it easier to get to the higher level.

Many structural innovations were beyond the scope of contemporary regulations and some more revolutionary engineering, such as metal cage construction, were applied in the field before the building codes caught up with the new technology.

The approach to firefighting has been the most obvious constraint. Buildings more than seven or eight storeys tall are beyond the reach of a typical firefighter’s ladder. The requirement for suppressing fires has to be designed within the building itself.

Some of the strategies developed for skyscrapers included compartmentalisation (containing and preventing the spread of fire), protected stairways for escape and for fire fighter access, a defend-in-place strategy, and the concept of phased rather than simultaneous evacuation of the building.

Building tall comes at a premium, and economies are an important motivator in developing cost-efficient designs. Greater financial return on higher floors can offset the cost, but the financial case can be complex.

Tall buildings are inherently more expensive to build than low-rises, largely because of the size of the structure required to deal with wind loads and vertical loads.

They take longer to build and are generally 25-40% more expensive per square metre than a low-rise building.

They also lose efficiency in terms of lettable or sellable area, because of the significant amount of area required in support. Stairs, lifts, bathrooms, and a myriad of services supplying power, fresh air, data, as well as key life safety systems are often bundled together in the building’s core.

A recent phenomenon in office design has been to increase the lettable area per floor, essentially fattening the building to improve the net-to-gross. 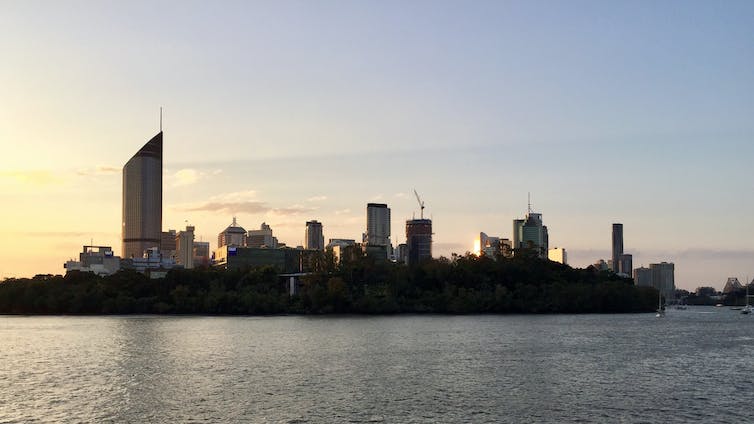 The past 60 years have seen extraordinary advances in technology. These include the development of structural systems, high-strength concrete and steel, vertical transportation systems, and sophisticated glass and steel façades coupled with computational methods and smart technologies.

Software and computing power has enabled more accurate analysis of structures and statistical analysis as well as higher degrees of coordination of the different systems that serve the building and its occupants.

There are many interesting technologies developing to service super-tall structures. For example, distributing water from the base to the top of a super-tall tower would be unacceptably costly using today’s technology.

The concept study NEXT Tokyo 2045 proposed for Tokyo Bay – which proposes the world’s first mile-high skyscraper – looks to decouple from urban utilities to avoid pumping water from the ground up. Instead, the design team proposes using the building’s surface area to harvest water from clouds and rain.

The tall building plan for Tokyo.

The façade of such buildings also offers enormous surface area for generating solar-powered energy for local use.

Smart technology for elevators that continuously review building traffic patterns and optimise traffic handling is one of the latest evolutions of elevator design. These would allow double and triple-decker elevators to work effectively.

Wright’s vision for quintuple-decker lifts (albeit in his proposal was powered by atomic energy) has become potentially viable due to the developments in both hardware and software.

Life in the high winds

The behaviour and expectations of occupants is likely to evolve owing to the physics of height.

Wind, often regarded as the main structural foe, is an inescapable phenomena that effects not only the structural response, but also occupant comfort and the level of engagement with the outdoors.

Wind hitting the building can cause uplift and areas of negative pressure that effects the permeability of the façade. Occupant controlled windows, balconies and outdoor living as we know it become untenable and a greater reliance is given to mechanical systems for ventilation and temperature control.

Buildings can be designed so that wind can pass through, and the energy harnessed and controlled. 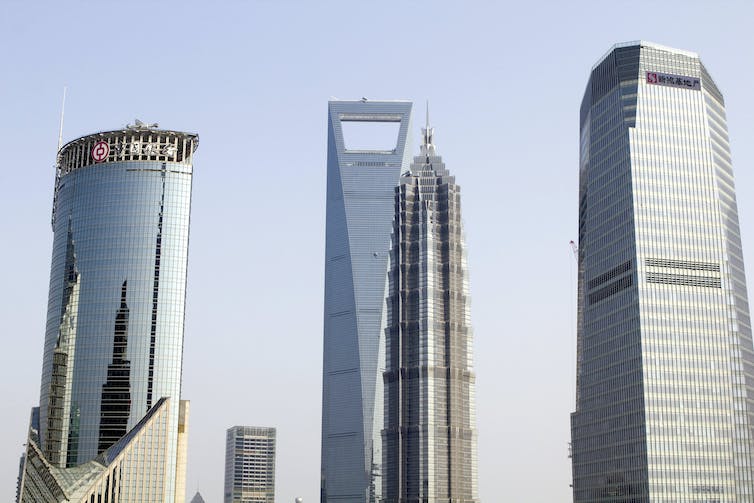 Unlike its towering neighbours, Shanghai’s World Financial Center has a hole in it to let the wind pass through. Flickr/mikeric, CC BY-NC-ND

If height becomes an inconvenience owing to the time taken in elevators to reach ground level, then multiple uses of intermediate levels should be considered so that street level is not the primary social destination.

A variety of uses such as leisure, work, social and healthcare uses could change the model of towers which from single use to something similar to a small town.

So we are able to adapt our technologies, business models and behaviours to accommodate for ever-increasing heights. It seems there is no height limit for buildings. Or is there?

We pay great attention to addressing all the drivers for tall, and seem to ignore all those elements that act as constraints. Yet history provides us with a long list of disasters involving tall buildings.

We recently witnessed a most painful example in the Grenfell Tower fire in London. 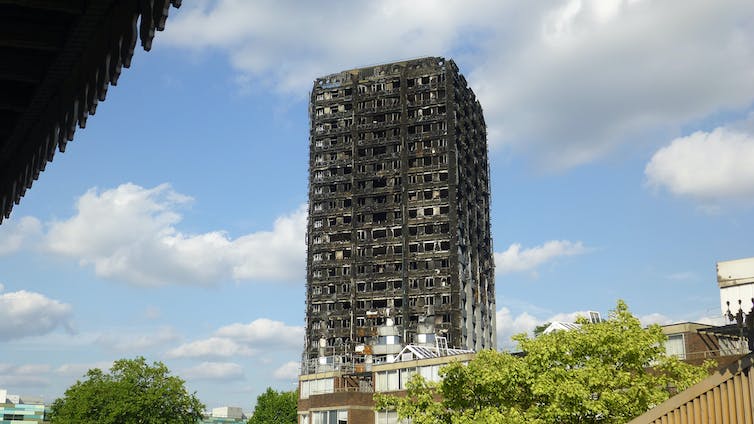 The Grenfell Tower in London after it was ravaged by fire. Flickr/PaulSHird, CC BY-SA

While long and detailed investigations will establish its causes, one obvious conclusion can be drawn without having to wait for such investigation.

Fire safety in high rise buildings (a constraint) has not received sufficient attention. This has put society in a position to challenge the competency of those involved in guaranteeing the fire safety of tall buildings.

Solutions generated to enable height, such as staged emergency evacuation and defend in place, do not seem to be valid anymore when large external fires seem to be an unavoidable feature of the architecture of modern tall buildings.

It is not certain we have solutions that will guarantee the safety of people occupying a tall building when we have no capacity to evacuate if a fire was to propagate externally. Let’s not forget that disasters can be one of the most effective means to put a break to progress.

So therefore the only limit to height is our capacity to maintain the safety of people in all aspects associated with the design, build and occupancy of tall buildings.