On January 27, 2017, the Bulletin of the Atomic Scientists moved the arms of its doomsday clock to 2.5 minutes to midnight – the closest it has been since 1953. Meanwhile, atmospheric carbon dioxide levels now hover above 400 parts per million.

Why are these two facts related? Because they illustrate the two factors that could transport us beyond the Anthropocene – the geological epoch marked by humankind’s fingerprint on the planet – and into yet another new, even more hostile era of our own making.

My new book, titled The Plutocene: Blueprints for a post-Anthropocene Greenhouse Earth, describes the future world we are on course to inhabit, now that it has become clear that we are still busy building nuclear weapons rather than working together to defend our planet.

Read more: An offical welcome to the Anthropocene epoch – but who gets to decide it’s here?.

I have coined the term Plutocene to describe a post-Anthropocene period marked by a plutonium-rich sedimentary layer in the oceans. The Anthropocene is very short, having begun (depending on your definition) either with the Industrial Revolution in about 1750, or with the onset of nuclear weapons and sharply rising greenhouse emissions in the mid-20th century. The future length of the Plutocene would depend on two factors: the half-life of radioactive plutonium-239 of 24,100 years, and how long our CO₂ will stay in the atmosphere – potentially up to 20,000 years.

Under these conditions, population and farming centres in low coastal zones and river valleys would be inundated, and humans would be forced to seek higher latitudes and altitudes to survive – as well as potentially having to contend with the fallout of nuclear conflict. The most extreme scenario is that evolution takes a new turn – one that favours animals best equipped to withstand heat and radiation.

While we have a range of tools for studying prehistoric climates, including ice cores and tree rings, these methods do not of course tell us what the future holds.

However, the basic laws of physics, the principles of climate science, and the lessons from past and current climate trends, help us work out the factors that will dictate our future climate.

Broadly speaking, the climate is shaped by three broad factors: trends in solar cycles; the concentration of atmospheric greenhouse gases; and intermittent events such as volcanic eruptions or asteroid impacts.

Solar cycles are readily predicted, and indeed can be seen in the geological record, whereas intermittent events are harder to account for. The factor over which we have the most control is our own greenhouse emissions.

CO₂ levels have previously climbed as high as 2,000 parts per million (ppm), most recently during the early Eocene, roughly 55-45 million years ago. The subsequent decline of CO₂ levels to just a few hundred parts per million then cooled the planet, creating the conditions that allowed Earth’s current inhabitants (much later including humans) to flourish.

But what of the future? Based on these observations, as reported by the Intergovernmental Panel on Climate Change (IPCC), several projections of future climates indicate an extension of the current interglacial period by about 30,000 years, consistent with the longevity of atmospheric CO₂.

If global warming were to reach 4℃, as suggested by Hans Joachim Schellnhuber, chief climate advisor to the German government, the resulting amplification effects on the climate would pose an existential threat both to nature and human civilisation.

Barring effective sequestration of carbon gases, and given amplifying feedback effects from the melting of ice sheets, warming of oceans, and drying out of land surfaces, Earth is bound to reach an average of 4℃ above pre-industrial levels within a time frame to which numerous species, including humans, may hardly be able to adapt. The increase in evaporation from the oceans and thereby water vapour contents of the atmosphere leads to mega-cyclones, mega-floods and super-tropical terrestrial environments. Arid and semi-arid regions would become overheated, severely affecting flora and fauna habitats.

The transition to such conditions is unlikely to be smooth and gradual, but may instead feature sharp transient cool intervals called “stadials”. Increasingly, signs of a possible stadial are being seen south of Greenland.

A close analogy can be drawn between future events and the Eocene-Paleocene Thermal Maximum about 55 million years ago, when release of methane from Earth’s crust resulted in extreme rise in temperature. But as shown below, the current rate of temperature rise is far more rapid – and more akin to the planet-heating effects of an asteroid strike. 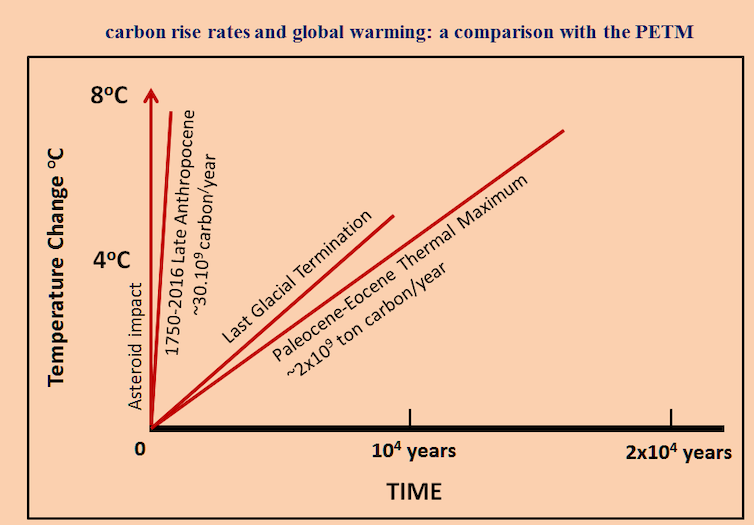 Rate of global average temperature rise during (1) the end of the last Ice Age; (2) the Paleocene-Eocene Thermal Maximum; (3) the current bout of global warming; and (4) during an asteroid impact. Author provided

Defending ourselves from global warming and nuclear disaster requires us to do two things: stop fighting destructive wars, and start fighting to save our planet. There is a range of tactics we can use to help achieve the second goal, including large-scale seagrass cultivation, extensive biochar development, and restoring huge swathes of the world’s forests.

Space exploration is wonderful, but we still only know of one planet that supports life (bacteria possibly excepted). This is our home, and there is currently little prospect of realising science fiction’s visions of an escape from a scorched Earth to some other world.

Read more: What is a pre-industrial climate and why does it matter?.

Yet still we waver. Many media outlets operate in apparent denial of the connection between global warming and extreme weather. Meanwhile, despite diplomatic progress on nuclear weapons, the Sword of Damocles continues to hang over our heads, as 14,900 nuclear warheads sit aimed at one another, waiting for accidental or deliberate release.

If the clock does strike nuclear midnight, and if we don’t take urgent action to defend our planet, life as we know it will not be able to continue. Humans will survive in relatively cold high latitudes and altitudes. A new cycle would begin.