Australia worked closely with the UK, Europe and USA in developing space capability in the 1950s and 1960s. from www.shutterstock.com

The eyes of the world’s space expertise will be on Australia this month, as Adelaide hosts the world’s largest space conference.

The meeting occurs in the 50th anniversary year of the launch of...

The eyes of the world’s space expertise will be on Australia this month, as Adelaide hosts the world’s largest space conference.

The meeting occurs in the 50th anniversary year of the launch of Australia’s first satellite, WRESAT. This project occurred as the culmination of a decade in which Australia was seen as a significant player in the space arena.

But now, Australia is perceived to be underperforming in the space sector. It remains one of only two OECD countries not to have a space agency (the other nation is Iceland).

So what happened in the past half century to slow us down? My doctoral thesis is attempting to find the answer.

Australian involvement in space activities commenced with participation in the International Geophysical Year (IGY), a global scientific research program focused on understanding the Earth’s relationship to its surrounding space environment. Longer than a calendar year, the IGY ran from July 1, 1957 to December 31, 1958, and was a significant catalyst for space-related activities in many nations.

In mid-1955, the USA and the USSR had both announced their intention to launch a satellite during the IGY. 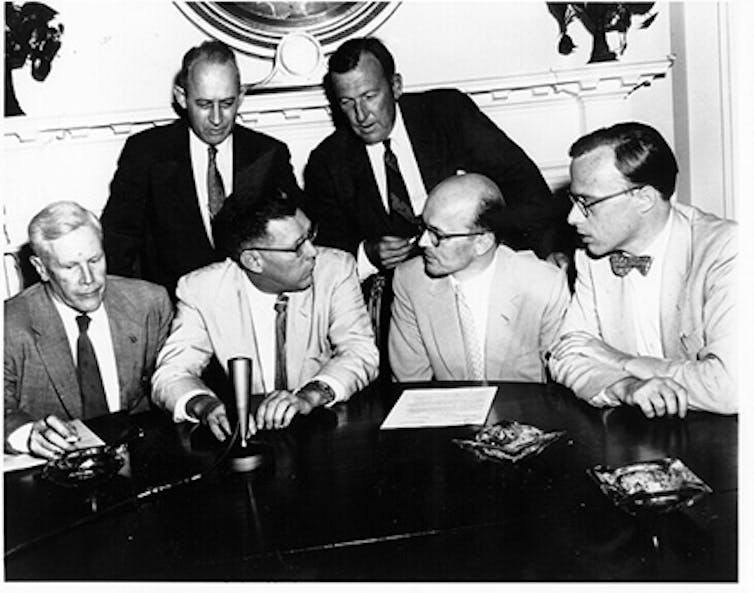 1955 American announcement of plans for the building and launching of the world’s first man-made satellite, under President Eisenhower. The then Presidential press secretary James Hagerty is shown with five scientists. NASA

In that same year, Britain and Australia’s Weapons Research Establishment (WRE) announced their IGY plans to launch sounding rockets for upper atmosphere research from the WRE-managed Woomera Rocket Range. Located in outback South Australia, the range had been established in 1947 under the Anglo-Australian Joint Project as a guided weapons development and test facility. 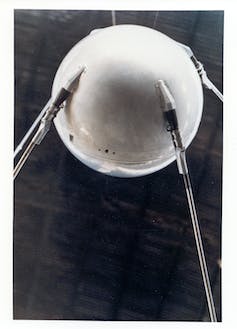 A mockup of the world’s first satellite, Sputnik. NASA

The decision to launch “sounding” (sub-orbital measurement-taking) rockets there for the IGY, coupled with US plans to launch the world’s first satellite, would lead to Woomera becoming the hub of early space activities in Australia.

The “space age” truly dawned in October 1957, with the surprise launch of the USSR’s Sputnik 1 satellite beating the US into orbit. A space race between the two Cold War superpowers commenced, with Australia poised to participate in the openly scientific and covertly military adventure of space exploration. 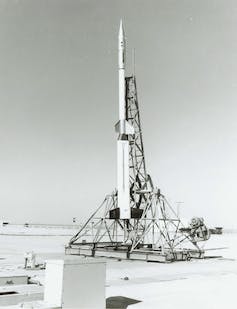 Although the WRE’s first sounding rocket program was unsuccessful, the development of the Long Tom rocket in 1958 paved the way for a succession of Australian sounding rockets operating until 1975. This program, conducted in conjunction with the University of Adelaide, carried out upper atmosphere research that made important contributions to understanding the factors governing Australia’s meteorology.

Project Moonwatch volunteers, mostly amateur astronomers, supported the Smithsonian Astrophysical Observatory’s work by spotting faint satellites and establishing their orbital co-ordinates so that the observatory’s high precision camera could be then be focused on the satellite. Australia boasted five initial Moonwatch groups (Sydney, Melbourne, Adelaide, Woomera and Perth) – the first citizen scientists of the Space Age. 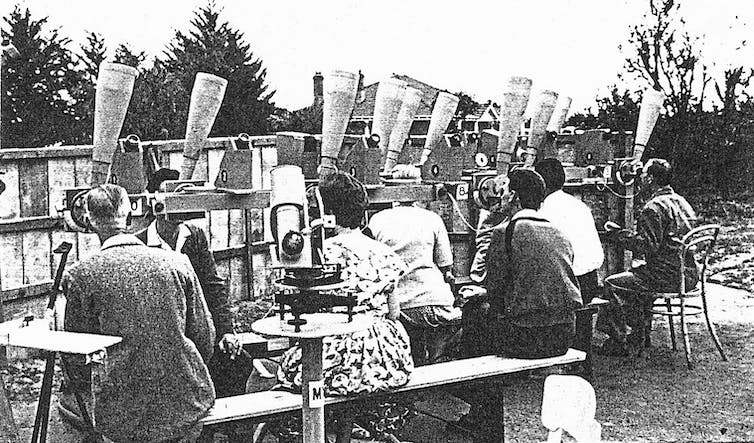 Members of the Perth MoonWatch group keep an eye out for satellites during the 1950s. Astronomical Society of Western Australia, Author provided (No reuse)

When NASA was formed in July 1958, it assumed control of these original tracking stations. By 1970, Australia was home to the largest number of NASA stations outside the USA, hosting facilities for its orbital satellite, “manned” space flight and deep space tracking networks.

These facilities, managed and staffed by Australians, made significant contributions to the early exploration and utilisation of space, particularly the Apollo lunar program. Television coverage of Armstrong’s first steps on the Moon came to the world through the NASA Honeysuckle Creek tracking station in the ACT (with the rest of the television during the Apollo 11 mission relayed via the CSIRO’s Parkes Radio Telescope).

Although advances in technology eventually rendered most of the Australian tracking stations obsolete, the NASA Deep Space Communications Complex at Tidbinbilla, near Canberra, continues to play a major role in the exploration of the Solar System. It was the station responsible for monitoring the final hours of the Cassini mission to Saturn, which concluded with the spacecraft’s death-dive into the planet’s atmosphere on September 15. 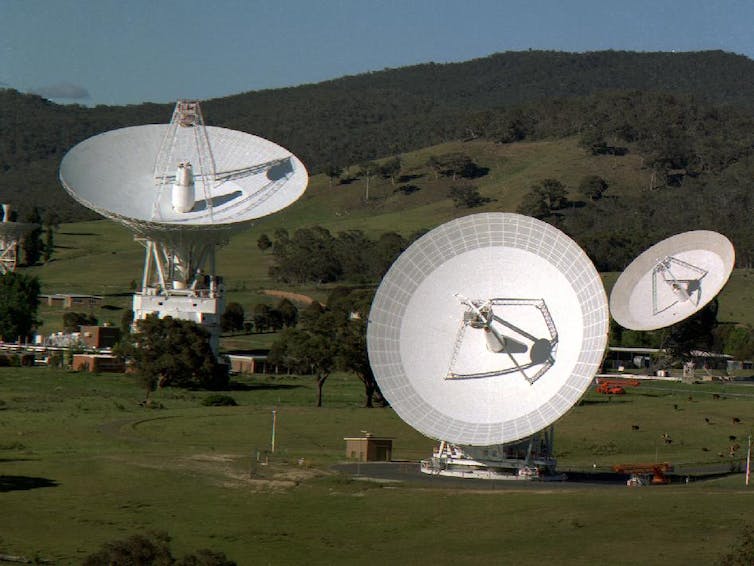 Defence-related space research commenced at Woomera in 1958 with the Black Knight and Jabiru programs.

Investigating nuclear missile warhead design, materials and re-entry phenomena, defence research programs continued until just before the termination of the Joint Project in 1980.

Particularly important to the Australian space story was the US-led SPARTA Project (1966-67): the generous donation of a spare launch vehicle from this program enabled the launch of WRESAT (Weapons Research Establishment Satellite), Australia’s first satellite. 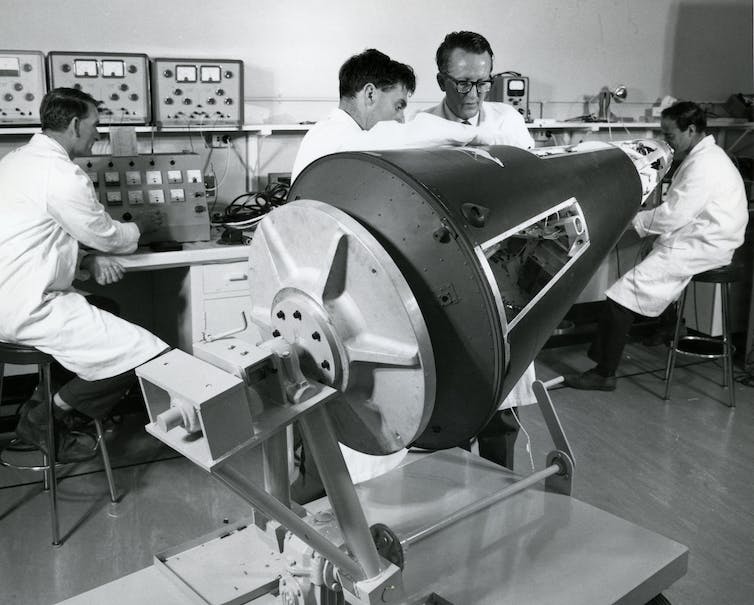 The WRESAT satellite under construction in a WRE laboratory. Defence Science and Technology Group, Author provided

With a launch vehicle available, WRESAT was designed, constructed and launched in only eleven months: a significant achievement in itself. A collaboration between the WRE and the University of Adelaide, WRESAT’s scientific instrument package was derived from the Australian upper atmosphere sounding rocket programs and helped to corroborate their findings.

Launched on November 27, 1967, WRESAT gave Australia entry into the exclusive “space club” of countries that had orbited a national satellite. 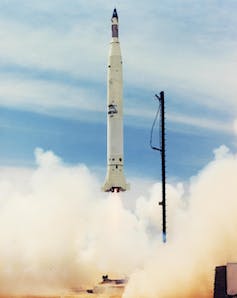 WRESAT was launched from Woomera in 1967. Defence Science and Technology Group, Author provided

At the end of its first decade of space activity, Australia had launched its own satellite, while a Melbourne University student-built amateur radio satellite awaited launch in the USA.

The country was a crucial participant in NASA space programs, through the tracking stations in the country, and an Australian (Dr David Forbes Martyn) chaired the UN Committee on the Peaceful Use of Outer Space’s Scientific and Technical Subcommittee.

To build on these achievements, in 1968 the WRE proposed a modest national civil and defence space program, which could have harnessed WRE and civil space capabilities towards the development of an Australian space industry. The proposal was rejected by the Gorton government on the basis of cost. 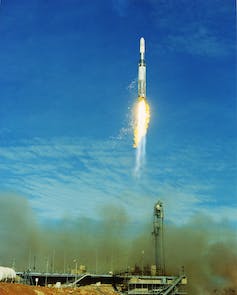 This marked the beginning of a cyclical process that has, at least in the civil sector, hindered Australia’s ability to maintain its original level of space capability, or redevelop it over recent decades.

Political parties of both persuasions have shown shortlived, underfunded, bursts of support for developing an Australian space industry, only to withdraw that support just as these programs were achieving results.

Potentially beneficial membership of the European Space Agency (the European Launcher Development Organisation’s successor), to which Australia has been repeatedly invited, has been constantly rejected, also (ostensibly) on the basis of cost.

Timeline of key events in Australia’s space activities: click on arrows at right and left to go back and forth.

The reluctance of successive Australian governments to support national space activities and a national space industry has been something of a puzzle, especially given the country’s reliance on space-based services.

My PhD research has sought to find the answer to this question within the first two “boom and bust” decades of Australian space activity. So far, no clear answer has emerged, apart from claims that “it’s too expensive”.

While an economic case could perhaps be made for rejecting a 1959 Australian National Committee on Space Research proposal for a national science program – given that Australia was then in recession – the 1968 WRE and 1970 Australian Space Research Agency space program proposals were both put forward during periods of economic prosperity. Their proposed costs represented very small fractions of GDP, and could have been affordable.

These early space program proposals had modest proposed costs, and reflected modest goals of developing a national capability in an important emerging technology.

However, there seems to have been a perception in government that committing to a space program, and/or a space agency, meant committing to high-cost ventures such as human spaceflight (which were admittedly beyond Australia’s economic means at the time).

This unnecessary assumption, which was overtly expressed in the activities that were specifically ruled out of the 2013 Australia’s Satellite Utilisation Policy, has continued to bedevil proposals for the development of national space capability.

Pragmatism, or something else?

I find it hard to accept that, as one previous article in The Conversation has suggested, the “intense pragmatism” of Australian governments has left them content to allow other nations to control Australia’s access to space.

As early as 1960, the government clearly recognised the value of space applications to the management and economic development of the vast continent of Australia, and to its national security.

Australia became an early adopter of satellite technologies and is well recognised today as a sophisticated and extensive user of space-based services and space-derived data.

Read more: Australia relies on data from Earth observation satellites, but our access is high risk

Until the economic rationalism of the 1990s, the development and management of national infrastructure was seen as the responsibility of government.

Why, then, was the “orbital infrastructure” of satellite networks on which the country came to rely, not also considered a responsibility of government in earlier decades?

Is it pragmatic to allow other nations, even if they are allies, the ability to control Australia’s access to vital space-based services?

Engagement in overseas military actions since 1990 has already taught the Australian Defence Force the importance of having control of its own satellite communication assets.

In late 2015, the government commenced a review of the Space Activities Act, which has been seen as hindering the growth of the New Space sector in Australia.

Growing calls from the space national space community for a space program and space agency have also this year prompted the 2017 review of Australia’s space industry capability.

Will the outcome of these two reviews be the revival of Australian space activities, at a level to equal or surpass our space engagement of half a century ago. Or will the nation continue to remain “lost in space”?

Perhaps an announcement during the 2017 International Astronautical Congress will tell.