South American horned frogs (Ceratophrys) can capture and swallow whole animals up to their own body size, including other frogs, lizards, snakes and rodents. This is possible because they have jaws that can produce an extremely forceful bite.

Just how powerful is the bite was part of our study, published today in Scientific Reports. We found that small horned frogs – with a head width of 45mm – can bite with a force of 30 Newtons (N). That would feel like having three litres of water balanced on the end of your fingernail.

More impressively, the largest horned frogs from Brazil – with a head width of 100mm – are calculated to bite with a force of 500N. That’s like having 51 litres of water balanced on your fingertip.

A bite like this is similar to that of reptiles and mammals with heads of similar size.

Bite force was measured using a special device called a force transducer. Unlike most frogs, horned frogs willingly open their mouths and bite objects (or fingers) as a defensive response.

An example bite force trial. Credit to A. Kristopher Lappin.

Our study is the first to measure bite force in frogs. Bite force has been measured in a variety of other animals including sharks, alligators, turtles, lizards, tuatara, bats, hyenas, rodents and worm amphibians. (A full list can be found here.)

Our study is also unusual in that the relationship between size and bite force was measured using multiple measurements from the same individuals from different points during their growth rather than just using a sample of different-sized individuals. 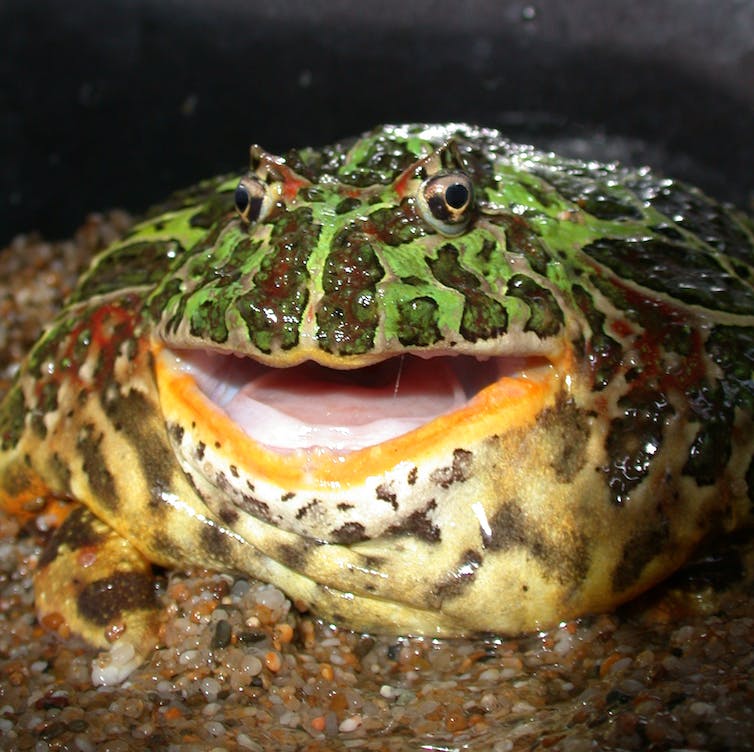 There are other large frogs that prey on vertebrates but horned frogs are arguably the most aggressive and voracious.

In the wild they will sit patiently, partially buried and well hidden, and attempt to ambush anything unfortunate enough to wander in front of them.

If just out of reach, the horned frog may lift one or both rear legs over its head and wiggle its toes to attract the attention of the potential meal. Once the victim is in range, the frog will rapidly lunge forwards with a wide open mouth.

The extremely adhesive tongue sticks to the prey and retracts, pulling the prey into the mouth, and the huge jaws clamp shut with great force to prevent escape.

This mode of predation contrasts with the majority of the more than 6,800 living species of frog that do not hide to avoid detection by prey, have weak jaws, and rely primarily on their tongue to catch small insects.

Because of their voracious appetite and stout shape dominated by a huge mouth, horned frogs are often referred to as Pacman frogs after the popular arcade game.

This, along with their attractive colour patterns, has made them popular as pets. Wild horned frogs tend to be spotted or striped with various greens and browns - effective camouflage - but captive breeding has led to a variety of colour morphs involving bright reds and yellows, with names such as dragon wing, lipstick, leopard, and two-faced.

Anatomy of a horned frog

Associated with the impressive bite forces of horned frogs and their ambush lifestyle are several important anatomical traits. They have a heavily built skull in which many of the connections between individual skull bones fuse together as the animal grows.

Along the upper jaw is a battery of small but sharp and recurved teeth, and at the front of the lower jaw is a pair of large bony fang-like projections (called odontoids). The sticky tongue of the horned frogs has been compared to pressure-sensitive adhesives and some species have plates of bone within the skin of their back.

The horns in horned frogs are small pointed structures above the eyes. Their prominence varies among species, and they may help to camouflage the frogs by looking like the tips of the leaves on the forest floor where they sit in wait for prey.

Horned frogs are not currently considered endangered but some species are considered near threatened. Like many animals they are suffering a loss of natural habitat. They are also often killed by local people because of false beliefs that they are venomous, and collection for the pet trade may also be significant.

A prehistoric frog with a bigger bite

Bite forces of some ancient frogs may have been even more impressive than those of today’s South American horned frogs.

Beelzebufo ampinga is a large heavily built frog from the Late Cretaceous period of Madagascar with a skull at least 150mm wide.

Like Ceratophrys it has a robust ornamented skull and teeth with a single point (not two points like most amphibians).

Detailed comparisons with the available skeleton suggest that its closest living relatives might be the South American horned frogs. When the relationship between bite force and size in the South American horned frogs is applied to the skull width of Beelzebufo the value obtained is 2,200N. That’s a massive 224 litres of water balanced on a fingertip – more than three times the weight of an average Australian woman.

A bite of this force is comparable to estimates for mammalian predators such as wolves and female lions, and within the realm of bite forces measured for crocodiles and turtles with similar skull widths.

For context, the bite force of an adult human male averages only about 25% that of a large Beelzebufo. With a bite like that, Beelzebufo would have been capable of easily overcoming small or juvenile dinosaurs that shared its environment.