On Wednesday a historic ceremony will take place in the UN General Assembly – the opening for signature of the Treaty on the Prohibition of Nuclear Weapons.

The agreements is long overdue. It is 72 years since the nuclear bombings of Hiroshima and Nagasaki, and 71 years since the first resolution of the newly formed UN General Assembly called for “the elimination from national armaments of the atomic weapons”.

It comes at a time of deeply disturbing resurgent nuclear threats and risks of nuclear war, which are considered by most experts – such as the 15 Nobel laureates among the custodians of the Doomsday Clock – to be as high as they have ever been.

It will provide the first comprehensive and categorical prohibition of the world’s most destructive weapons. The treaty makes clear that the catastrophic humanitarian consequences of any use of these weapons means they can never be used again, and consequently should be eliminated. It affirms that as the risks concern the security of all humanity, all countries share this responsibility.

Read more: Three good reasons to worry about Trump having the nuclear codes

Countries that join the treaty must not develop, test, produce, possess, transfer, receive, station, deploy, use or threaten to use nuclear weapons. There are provisions outlining a pathway for those that have nuclear weapons now, had them in the past, or host nuclear weapons, if they can verify they are rid of their nuclear weapons, related programs and facilities.

The treaty is carefully crafted to complement other disarmament treaties, in particular the Nuclear Non-proliferation Treaty (NPT).

Not only is the content of the nuclear weapons treaty historic, but the process of its genesis has also transformed the moribund nuclear disarmament landscape. For the first time, a nuclear disarmament treaty has been led by the countries without the weapons, and has an unequivocal humanitarian basis.

The level of involvement of civil society was unprecedented, particularly Japanese hibakusha (those who survived the atomic bombs) and nuclear test survivors, including from Australia.

The UN was used for the first time in 21 years to negotiate a nuclear disarmament treaty, because it’s most inclusive and democratic forum, the General Assembly, is able to adopt substantive measures by vote.

This is in stark contrast to the NPT conferences and the Conference on Disarmament, which are paralysed by a requirement for consensus.

The treaty was able to be completed from negotiating mandate to adoption in eight months, with only four weeks of actual negotiations. This was because of a widespread determination to seize this landmark opportunity on the part of many states, who were more willing to put aside parochial agendas than I have ever witnessed in a nuclear forum over the past 35 years. 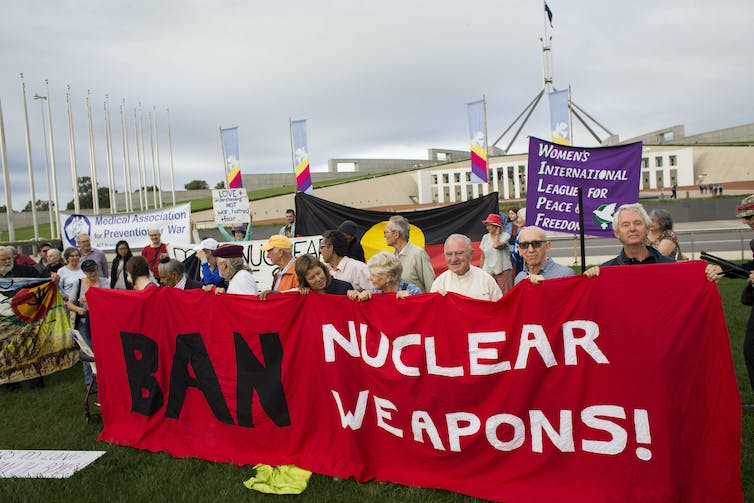 Fierce opposition came from nuclear-armed and nuclear-dependent countries (including Australia), as a US document to its NATO allies demonstrates. Strong political and economic pressure exerted on many countries by the US, UK, France and Russia, despite peeling off some smaller and weaker countries, proved ineffective.

Pressure on countries not to sign, most publicly US Secretary of Defence James Mattis’ admonition to Sweden, will likely ramp up. However, the treaty is a triumph of the interests of common humanity, and is not going away.

The dangerous brinkmanship and extreme threats traded between Donald Trump and Kim Jong-un are only the latest explicit threats to use nuclear weapons by a succession of leaders, including Theresa May, Vladimir Putin, and leaders in India and Pakistan.

North Korea’s escalating development and testing of both nuclear weapons and long-range ballistic missiles demonstrate that any determined nation can develop both.

The fundamental problem is what South African ambassador Abdul Minty described as “nuclear apartheid”, with the countries possessing nuclear weapons busy modernising and determined to retain them, rather than fulfil their obligation to disarm. This is an inevitable driver of nuclear proliferation.

There are no right hands for the wrong weapons.

No human should have the power to end the world in an afternoon. If nuclear weapons are retained they will eventually be used. The crisis relating to North Korea, for which there is no military solution, highlights again that our luck could run out any day.

The countries that have foresworn biological and chemical weapons now need to do the same for nuclear weapons. The Treaty on the Prohibition of Nuclear Weapons provides a credible pathway to the verified, time-bound elimination of weapons posing the most acute existential threat to people everywhere.

All countries – including North Korea, the US and Australia – should join the treaty.