When the Cassini space probe makes its final descent into Saturn later today, data from the final nine hours of the mission will be sent back to NASA’s tracking station in Canberra, Australia.

As the probe descends, it will capture images and data from Saturn and its atmosphere, revealing more of the planet’s secrets. Under the spacecraft’s normal operations, its instruments first store and later forward images and data to Earth.

But in Cassini’s final hours, it will be transmitting home in real time, with the signals picked up by the CSIRO-managed Canberra Deep Space Communication Complex (CDSCC).

Read more: The secrets of Titan: Cassini searched for the building blocks of life on Saturn’s largest moon

The CDSCC is part of NASA’s Deep Space Network, one of three tracking stations around the world that provide vital two-way radio contact with Cassini and 30 other spacecraft including Voyagers 1 and 2. 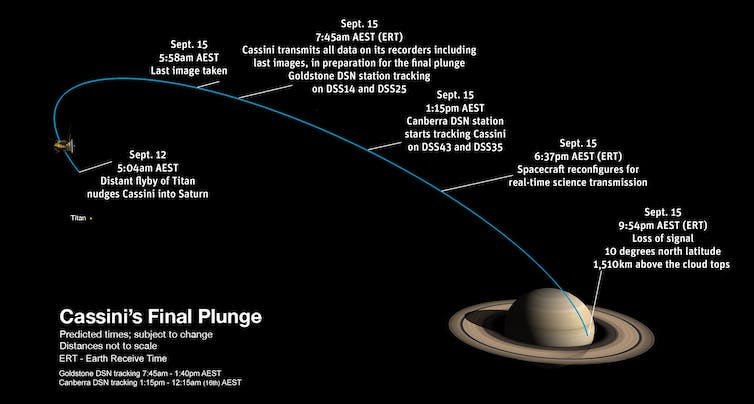 Cassini’s final bonanza of data, transmitted as weak radio signals, will take 83 minutes to travel 1.5 billion km at the speed of light to reach the giant dish antennas in Canberra.

At an estimated 9:54pm AEST tonight (September 15), CSIRO’s team at CDSCC will capture the final signals as Cassini, travelling at more than 111,000km per hour, plunges into Saturn’s atmosphere.

How to destroy the probe

NASA decided to safely dispose of Cassini into Saturn, ending its mission as a shooting star. With the spacecraft nearly out of fuel and possible loss of control, this plan will prevent accidental collisions with any of Saturn’s moons and potential biological contamination by microbial stowaways from Earth.

Viewed from Saturn, the last moments of Cassini would look similar to a meteor entering Earth’s atmosphere. 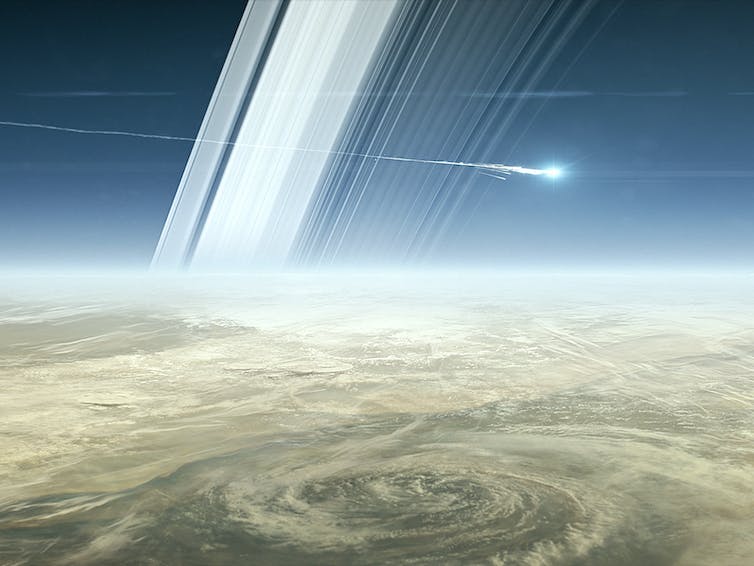 From Earth, the world will await the bittersweet moment when NASA’s Jet Propulsion Laboratory mission control announces loss of signal. Cassini’s final call home will have been made.

Inspired by the earlier flypast by the twin Voyager spacecraft, the two-part mission was actually known as the Cassini-Huygens mission.

The main craft was designed to study Saturn and its environs, while the piggybacking Huygens probe was to land on Titan, the planet’s largest moon.

Throughout its odyssey, every step of Cassini’s journey has been followed by the dishes at CDSCC in Canberra. It was the first tracking station to make contact with Cassini after its launch from Cape Canaveral in October 1997. 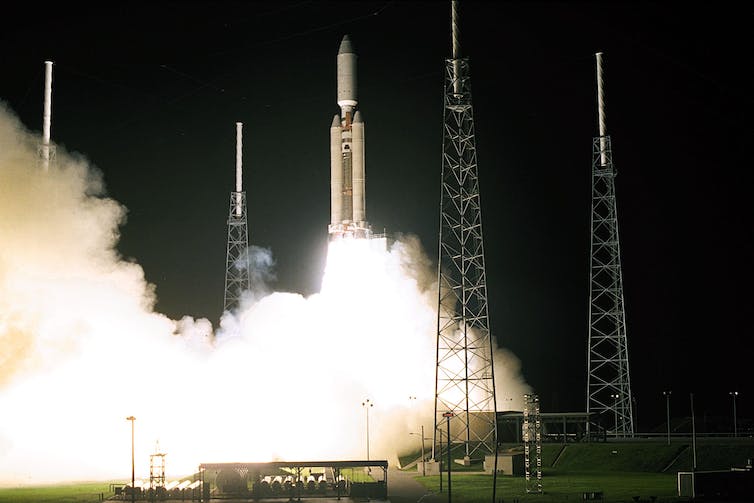 The Cassini spacecraft and Huygens probe begin their seven-year journey to Saturn after a successful launch on October 15, 1997. NASA

It then tracked Cassini throughout its seven-year journey to Saturn, handling the vital communications as it arrived and was placed into orbit around the planet in July 2004.

As the first spacecraft to orbit Saturn, it has studied the planet, its rings and its 62 moons, seven of which were discovered by Cassini.

In 2005 the Huygens probe transmitted data as it landed safely on the surface of Titan. This was the first landing on a world in the outer Solar System.

The Huygens probe’s descent to Titan.

Cassini has now witnessed almost half a Saturn year, which is 29 Earth years long.

While Voyagers 1 and 2 had spectacular encounters with the outer planets interspersed by years of travel, Cassini has delivered science on a daily basis.

Like a Swiss Army Knife of spacecraft, Cassini has a plethora of scientific instruments on board. 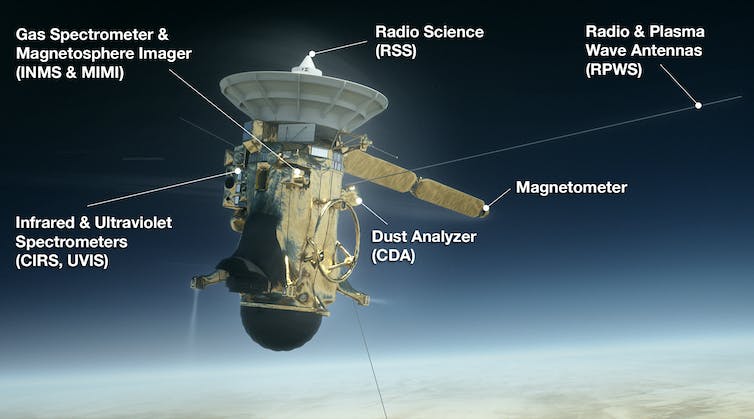 Eight of Cassini’s science instruments are planned to be turned on during the final plunge, including the Ion and neutral Mass Spectrometer (INMS). NASA/JPL-Caltech

While the most inspiring data is the images, for staff at CDSCC the excitement has centred around performing dozens of unique radio science experiments with the Cassini team.

Using a process called bistatic radar, which is the deep space version of sonar, the data received made it possible to measure the size and distribution of particles in Saturn’s rings. 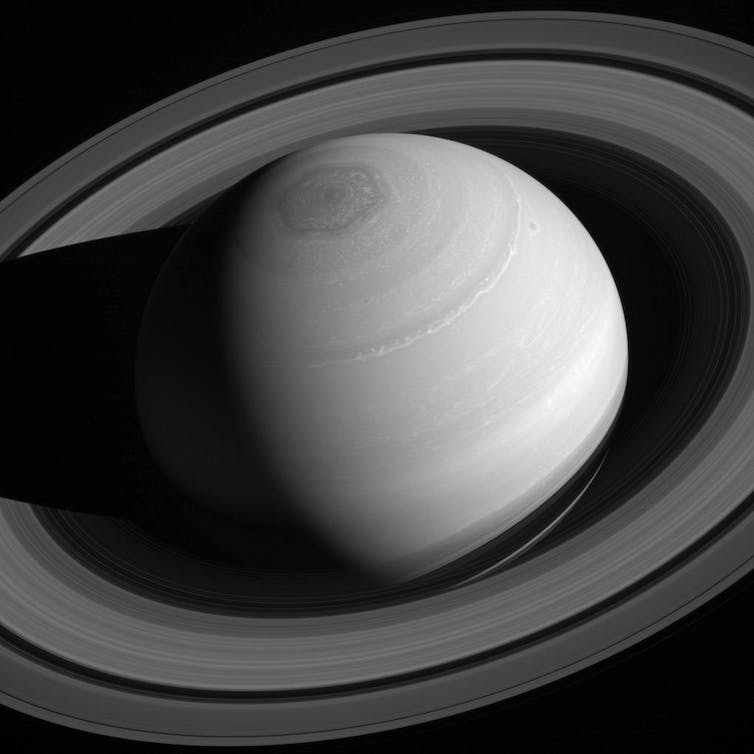 It was also used to map the terrain and depths of ethane and methane lakes on the surface of Titan. For Cassini’s final bistatic observations of Titan earlier this year, key members of Cassini’s science team travelled to Canberra to witness the data coming into CDSCC first-hand.

Staff found it exhilarating to watch the pure excitement on the faces of Cassini’s team standing in their Canberra control room as the spacecraft’s faint signals were being received.

To some of us, the data may have appeared as not much more than a slightly higher peak in a hash of radio noise, but to the mission team it meant discovering a shoreline or a lake bottom on the surface of a world more than a billion kilometres away. Being a part of these discoveries was a proud moment for CDSCC and its CSIRO team.

The rest of the probes

As we say goodbye to Cassini, CDSCC continues to track more than 30 other spacecraft, not only NASA probes but also those of other international space agencies in Europe, Japan and India.

The Canberra antennas still support both Voyager spacecraft for several hours each day, receiving data from the edge of the Solar System and beyond. 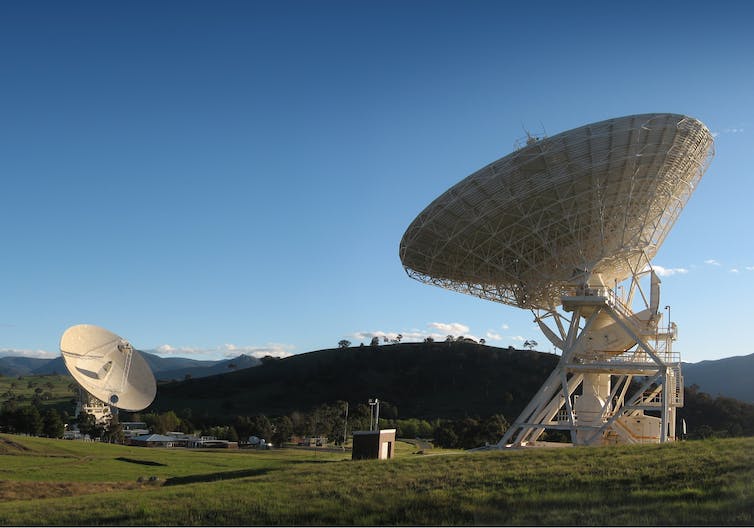 NASA’s Juno has only just begun its primary mission, transmitting scientific data as it orbits Jupiter. Its highly elliptical orbit brings the spacecraft dangerously close to Jupiter (5,000km) before retreating away from the radiation-intense planet.

New Horizons, which flew past Pluto in 2015, has set a course for an encounter with a Kuiper Belt object on January 1, 2019. The spacecraft is periodically woken from hibernation to check system functions before being returned to slumber.

The next few years will see a quantum shift as the Deep Space Network moves to supporting proposed human missions to the Moon, asteroids and Mars. 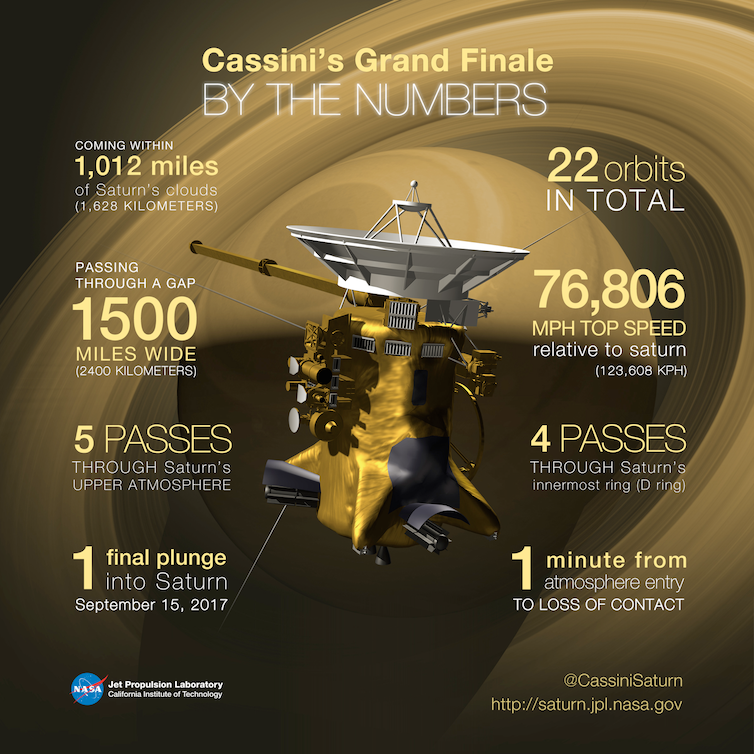 Some key numbers for Cassini’s Grand Finale and final plunge into Saturn. NASA/JPL-Caltech

For now though, CDSCC is concentrating on Cassini’s final moments, delivering its last breath of data to NASA scientists who will continue to study the information for decades to come.

Read more: A look back at Cassini’s incredible mission to Saturn before its final plunge into the planet

Using the big 70-metre antenna dish at CDSCC as the prime receiver, it will be backed up by a smaller 34m dish. To add even further redundancy into the system, the European Space Agency has a 35m dish in New Norcia, Western Australia, which will also listen to Cassini’s radio whispers.

Cassini’s final hours will be a bittersweet moment for the CDSCC team, losing a spacecraft that for 20 years had become a daily part of our lives.

We will say a fond farewell to an incredible mission, safe in the knowledge that we’ve been a part of an adventure that revealed Saturn as a real place, full of wonders, for future generations to explore.

There are a several ways to watch Cassini’s final hours, including: