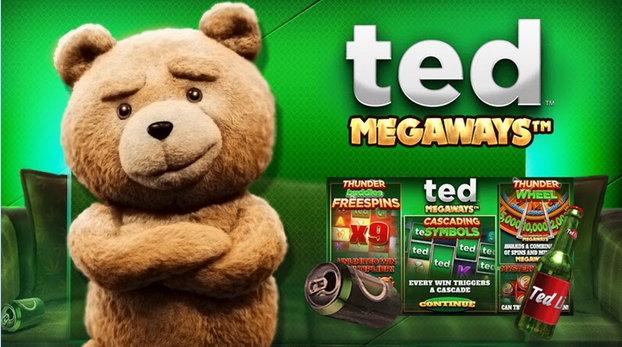 The entertainment world is known to draw inspiration for indulgences from other famous works of art. Some books inspire films, video games that inspire TV shows, and TV series that inspire slot machines. This article focuses on the latter category to explore the seven best slots that are based on TV series.

Ted is one of the most successful American comedy films and was released in 2012. The film, which was directed and written by Seth MacFarlene, follows the unlikely tale of a stuffed bear that comes to life after the lonely boy John Bennett makes a wish. Ted and John become best friends, but in adulthood, the story adds a twist of bromance vs romance. The clever use of adult humour in the film made it so successful that a sequel was released in 2015. This time, the story focused on Ted as he went on a civil rights battle to be known as a man rather than a property.

Blueprint Gaming, one of the top-tier online gaming software developers, recognized the success of the comedy series and released the Ted slot machine in March of 2017. The game focuses on the stuffed bear only and makes use of his vulgar personality to deliver entertainment. For most of the game, Ted is asleep on his couch with a five by three grid hanging over his head and empty beer bottles scattered all around. The grid spins with bets of between 0.20 and 200 credits on all 20 play lines. With each spin, players can land any of the following combinations, whose values are then multiplied by the use line bets:


These payouts are accompanied by two bonus packages. The first of these incentives is the Thunder Buddies Bonus which lets players climb a latter where they can collect one of five bonuses, which are:

The second package is activated randomly when Ted wakes up from the couch and picks up his remote. One of six modifiers are awarded, and they are:

The Ted slot machine shared the widespread success of the film that inspired its creation, which pushed Blueprint Gaming to revamp it with the megaways feature. Ted Megaways demo slot was released in July of 2020 with numerous improvements to the original.

Netflix shook the world when it released their 2015 drama series, which chronicled the life of notorious Colombian drug lord Pablo Escobar. Narcos is set in the eighties and nineties and shows the rise of Pablo as he became king of the Medellin Cartel. Even after the death of Pablo Escobar in the second season, Narcos chose to continue with the series as it depicts the life of other dangerous drug lords as far as Mexico. The show has earned throngs of diehard fans since its release because it follows a true story with dramatisation. Therefore, it is no surprise that NetEnt introduced the TV series to online casinos with a slot of the same name.

Narcos slot machine is filled with as much as action as the series, but its visuals have a cartoon twist that makes it a little different from what punters see in the series. The branded slot does not disappoint with a lot of action depicted by the main characters Pablo, Javier Pena, Steve Murphy, Connie Murphy, and Gonzalo Gacha. Even the poker face cards A, K, Q, and J get a violent twist with guns, grenades, and wads of cash scattered around them. The symbols appear on a five by three grid placed in the middle of a Medellin street with houses flanking each side and a drug plane flying overhead from time to time.

Players get in on the action once the reels start spinning and awarding combination wins of up to 300 times the line bets. The game is also loaded with numerous bonus features, such as:

Game of Thrones online slot is inspired by the American fantasy drama of the same name, which was in turn inspired by the book series, A Song of Fire and Ice. The TV Series, which streams on the networks HBO, IMAX, and Netflix, revolves around the civil war of the fictional continents of Westeros and Essos. The battle is spearheaded by four influential houses known as Stark, Targaryen, Lannister, and Baratheon. As these families fight to take control of the Iron Throne, it also takes on the primary plotline of the army of the dead, which rises after the end of a decade-long summer. The tale stretches for eight glorious seasons, which started in 2011 and ended in 2019.

Game of Thrones slot game by Microgaming follows the same plotline to see which of the four houses will come out on top to grant winnings to players. The battle for control of the seven kingdoms unfolds on a five by three grid set in the throne room. Players can choose one of two versions, one with fifteen play lines while the other has 243 win ways. However, the payout values remain the same with the highest combination awarding 1000 coins. In both slots, gamblers can choose one of four free spin bonuses that are triggered by the iron throne scatter, and each one represents a house as follows:

Family Guy is among the most successful animated series of all time with eighteen successful seasons so far. The series showcases the Griffin family, which is headed by the endearingly ignorant Peter and his wife, Lois. IGT takes on the role of creating a slot game based on the show, where players meet the rest of the family along with some of Peter’s friends. The highest win in the game is 500 times the line bet, which is awarded by the slot logo. The set also includes bonuses like The Drunken Clam, Lois’ Hot Free Spins, and Chicken Fight.

Planet of the Apes

Planet of the Apes goes beyond being a TV series and instead is a science fiction media franchise that traverses the realms of comics, books, films, and other media. In all these creations, the central theme is the clash between humans and intelligent apes as they fight for control. NetEnt creates the slot game Planet of the Apes based on two of the latest films which are Rise of the Planet of the Apes and Dawn of the Planet of Apes. The slot features a unique playtable with two 5x3 grids, each one offering wilds, free spins, and wins of up to 1000 times the line bet.

The Big Bang Theory is a thriving sitcom based in the brilliant scientists Leonard and Sheldon as they find learn how to interact with people. The show had a successful run from 2007 to 2019 when it came to a close. Players can still enjoy some laughs with The Big Bang Theory slot game by Aristocrat, which has a classic three by three grid arrangement. It also includes a wheel of fortune bonus as well as three progressive jackpots with The Proton being the most valuable.

Hotline slot by NetEnt draws inspiration from eighties TV show Miami Vice. The series centred on two successful detectives on a mission to fight crime in Miami. In the slot game, players are invited on a highway chase to take down a bombshell who just robbed a jewellery store. Along the way, punters can collect payouts of up to 200 times the line bet along with expanding wilds linked to hotlines on the five by three grid and free spins.

Gamblers can meet some of their favourite characters from TV shows in these slots, and this time, they can enjoy more than just an exciting time in the form of credit wins. The games are open to exploring in free demo versions as well as real money ones.