It’s that time of year again, when the humpback highway is about to hit peak blubber to blubber as humpback whales migrate up Australia’s east and west coasts from Antarctic waters.

They’re headed to the whale disco – warm breeding waters where males will sing their whale song to attract female company, and pregnant females... 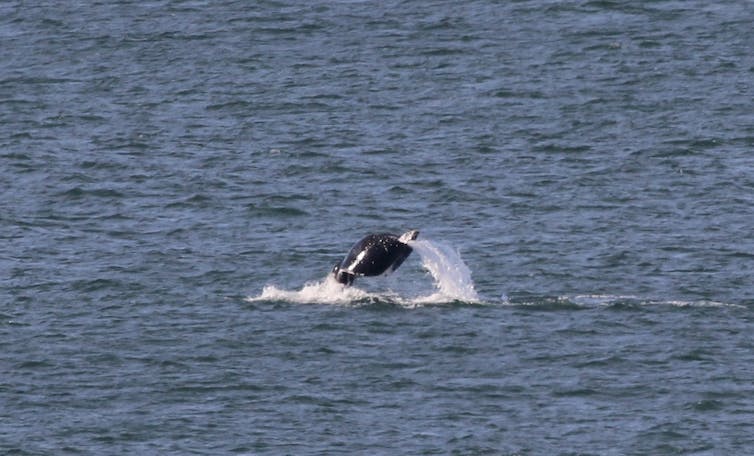 It’s that time of year again, when the humpback highway is about to hit peak blubber to blubber as humpback whales migrate up Australia’s east and west coasts from Antarctic waters.

They’re headed to the whale disco – warm breeding waters where males will sing their whale song to attract female company, and pregnant females will birth their calves.

Already this season we’ve seen dolphins dancing with whales, dwarf minke whales with their calves, killer whales and a re-sighting of Curly, the humpback with an unusual curved tail. That’s only just the beginning.

We expect more than 40,000 humpback whales to make this annual journey. I’ll be joining the ABC for their special tonight, Southern Ocean Live, to explore the science around this glorious migration first hand.

But as excitement for the whale season builds, there’s just one whale on the minds of many: the famous white humpback whale named Migaloo.

Migaloo is by far one of the world’s most recognisable whales, because he is completely white. Thanks to genetic sampling of Migaloo’s skin, scientists have identified that he’s male, and his albino appearance is a result of a variation in the gene responsible for the colour of his skin.

Simply by looking different, Migaloo has become an icon within Australia’s east coast humpback whale population. Indeed, Migaloo has his own Twitter account with over 10,000 followers, and website where fans can lodge sightings and learn more about humpback whales.

He was first discovered in 1991 off Byron Bay, Australia, and has since played hide and seek for many years, with many not knowing where or when he’ll show up next. He’s even surprised Kiwi fans by showing up in New Zealand waters.

With the last official sighting two years ago, the time has once again come for us to ask: where is Migaloo?

Already this year there have been false sightings, such as a near all white whale spotted off New South Wales. To make things more confusing, regular-looking humpbacks can trick whale watchers when they flip upside down, due to their white bellies.

Migaloo as a flagship whale

The annual search for Migaloo connects people with the ocean during the colder months, and is an opportunity to learn more about the important ecological role whales play in the sea.

Migaloo’s popularity has also help drive modern marine citizen science. For example, the Cape Solander Whale Migration study records sightings of Migaloo as part of their 20 year data set. His presence was always a highlight for citizen scientists in the team.

Migaloo also represents the connection whales play between two extreme environments: the Antarctic and the tropics, both of which are vulnerable to climate change.

Earlier this year humpbacks were removed from Australia’s list of threatened species, as populations bounced back significantly after whaling ceased. But climate change poses a new threat, with a paper this year suggesting rising sea surface temperatures may make humpback whale breeding areas too warm.

Other changes to the ocean – such as ocean currents and the distribution of prey – may change where whales are found are when they migrate.

In Australia, for example, we’re already seeing many whales dine out on their migration south. Humpback whales are known to primarily feed once they’re back in Antarctic waters, so scientists are closely watching any new feeding areas off Australia.

Feeding in Australian waters might even become an annual event, and may mean southern NSW waters become an area of importance for migrating humpback whales. This behaviour encourages us to ask more about what’s going on below the surface, and the potential changes in the broader marine ecosystem we just don’t yet know about.

Humpback whales feed on krill in the Southern Ocean, before they travel northwards to breed. Shutterstock

So where is he now? Could he be dead?

Migaloo’s presence – or lack thereof – highlights the variations in whale migration. Some whales may choose to migrate early or late, or even elsewhere such as in New Zealand. Others might choose not to migrate at all and remain in the Southern Ocean.

Migaloo’s presence may be driven by several factors. This includes social circumstances, such as interactions with other whales (including moving between different pods) or biological needs (the desire to head north the reproduce).

Environmental conditions, such as currents and water temperature, may also impact when and where Migaloo chooses to swim.

Unfortunately, Migaloo and other whales do face a number of human-caused threats in the ocean every day, such as entanglement in fishing gear or collisions with ships. They also face natural threats, such as predation by killer whales.

Fortunately, Migaloo’s sighting history has shown us he can turn up when we least expect it, or not. So, there’s still hope we might see him yet. After all, being in his mid 30s, he’s likely in the prime of his whale life.

How to get involved

A team of 200 citizen science scuba divers, for example, surveyed 2,406 ocean sites in 44 countries over a decade to track how warming oceans impact marine life. They found fish may expand their habitat, pushing out other sea creatures.

But participating in marine citizen science is often as easy as recording wildlife observations on your phone next time you’re at the beach. Opportunities include Happy Whale, RedMap, Wild Sydney Harbour and INaturalist.

This year’s annual migration will last until October or November, so here’s hoping we’ll see Migaloo once again. The power of this unique whale to generate discussion, despite not being seen for years, is true testament to just how curious we are about the mysteries of the deep.

Read more: Humpback whales have been spotted in a Kakadu river. So in a fight with a crocodile, who would win?